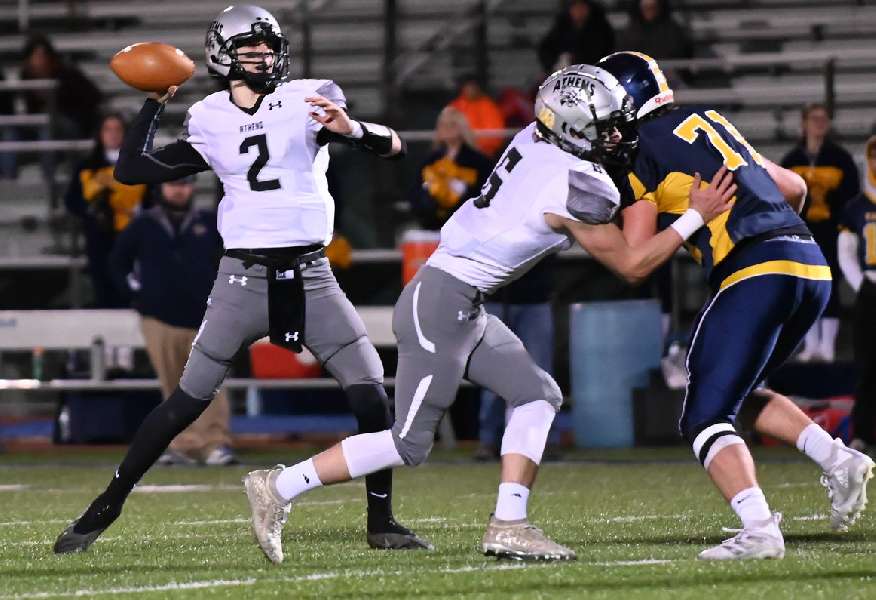 MONTOURSVILLE — Montoursville had the perfect recipe for success. It scored on a big special teams play early, established its running game, and forced four Athens turnover on its way to a 48-14 win here Friday night in the quarterfinals of the District 4, Class AAA football playoffs.

“You can’t make mistakes we made tonight,” said Athens coach Jack Young. “You can’t make them ever, let alone in a playoff game. The teams are too good, and they make you pay.

“You can’t play a game like we played tonight and expect to win — too many mistakes,” added Young.

The Warriors were on the board just 15 seconds into the contest when Matt Conklin returned the opening kickoff 79 yards for a score. Wyatt Fry’s PAT kick made it 7-0.

“We kicked the ball exactly where we wanted to kick it, but we didn’t do a good enough job in coverage,” said Young.

The Wildcats hit on a 38-yard pass from junior QB Mason Lister to senior tailback Shayne Reid on their first play from scrimmage, but were forced to punt shortly thereafter.

The Warriors took the punt and marched 70 yards for a score, with Kayden Frame capping the drive with a 3-yard TD run with 5:03 remaining in the first quarter to make it 14-0.

Moments later, Rocco Pulizzi picked off a Lister pass and returned it 29 yards to the Wildcat 1-yard line. Frame punched it in with 3:55 left in the first quarter to extend the lead to 21-0.

After forcing the Wildcats to punt on its next possession, the Warriors drove for another score with Jake Reeder pulling in a 6-yard TD pass from Maddix Dalena to make it 28-0 with 10:53 remaining in the first half.

Athens threatened on its next possession, moving into the Montoursville red zone on a 66-yard hook-and-lateral pass from Lister to senior J.J. Babcock to Reid. However, Athens fumbled the ball away two plays later.

The Wildcat defense forced a Montoursville punt, and the offense quickly put points on the board, with Lister connecting with Rude for a 26-yard TD strike. Reid’s PAT kick made it 28-7 with 5:01 remaining in the first half.

Athens kept the momentum going when Reid recovered the ensuing onside kick, but the Wildcats fumbled the ball away moments later.

The Warriors capitalized with a short scoring drive culminating with a 16-yard TD run by Frame to make it 35-7 with 2:01 remaining in the first half.

The Wildcats gambled on its first possession of the second half with a fake punt in their own territory, but the Warriors stuffed it at the Athens 32.

On the next play, Dylan Blackwell ripped on a 32-yard TD run to make it 41-6 with 9:16 remaining in the third quarter.

Athens fumbled the ball away again on its first play of the ensuing possession, and Blackwell capped a short scoring drive with a 3-yard TD run to make it 48-7with 6:55 left in the third quarter.

Athens lit up the scoreboard for the final time of the season with a 38-yard TD pas from Lister to Rude with 8:54 left in the game. Reid’s second PAT kick provided the final margin.

Reid led Athens with 32 rushing yards on 11 carries. The Wildcats had just 39 yards on the ground on 21 carries.

Lister completed 14 of 25 passes for 264 yards and two TDs, while being picked off once.

Rude led Athens receivers with seven receptions for 108 yards and two TDs, while Reid had four catches for 127 yards, and Babcock added two grabs for 27 yards.

“(Montoursville) was a better team than us tonight,” said Young. “I’m not sure they’re that much better than us, but at the same time I’m appreciative for these kids.

“They’ve played hard,” added Young. “This senior class is a special class, it’s avery talented class. There are some special people there, but I’m appreciative of the entire team, of their effort and their time.”