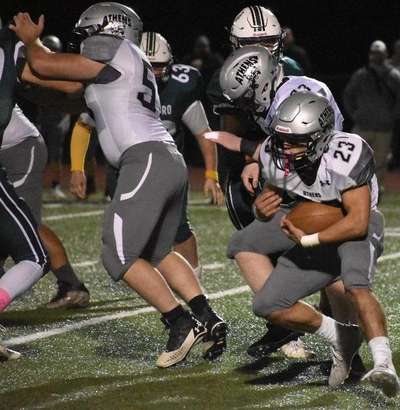 WELLSBORO — Conner Adams caught two TD passes and ran for two more scores in the first half as Wellsboro raced out to a 42-7 halftime lead en route to a 49-13 win over Athens here Friday night in NTL Large School football action.

Adams, who added a TD in the third quarter, rushed for 137 yards and three TDs on just nine carries, and caught three passes for 77 yards, and two TDs.

Wellsboro QB Isaac Keane completed 8 of 11 passes in the game for 235 yards and three TDs.

“We showed what we can do when it’s clicking,” Wellsboro coach Matt Hildebrand said. “We’re getting guys back and we’re getting healthy.”

Wellsboro needed just four plays to get on the scoreboard. On the second play of the game, Keane connected with Jack Poirier on a 54-yard completion to the Athens 15. Two plays later, Darryn Callahan scored on a 7-yard TD run. Poirier’s PAT kick made it 7-0 with 10:02 remaining in the first quarter.

After forcing a three-and-out, Wellsboro put together another quick scoring drive, with Keane connecting with Adams on a 28-yard scoring strike to make it 14-0 with 7:16 left in the first quarter.

After another Athens three-and-out, Wellsboro found paydirt again. On fourth-and-6, Keane hooked up with Adams on a 33-yard TD pass to make it 21-0 with 3:06 left in the first quarter.

The Wildcats picked up their initial first down of the game on their next possession, but a deflected pass on third down resulted in a Keane interception and 19-yard return to the Athens 24.

On the final play of the first quarter, Keane found Spencer Wetzel open for a 25-yard TD to make it 28-0.

The scoring pace slowed, until a 7-yard TD run by Adams with 1:56 remaining in the first half extended the lead to 35-0.

The Wildcats offense clicked to life following the ensuing kick-off. Junior QB Mason Lister connected with senior tailback Shayne Reid for a 40-yard completion to the Wellsboro 25, then found senior Karter Rude for an 18-yard completion.

On the next play, Reid made a diving catch in the end zone to put the Wildcats on the board. Reid’s PAT kick trimmed the deficit to 35-7 with 59 seconds remaining in the first half.

However, the first-half scoring was not finished.

Despite being backed up to their own 15 by a penalty on the ensuing kickoff, the Green Hornets quick drove down field, powered by a 24-yard scramble Keane, who then found Dylan Abernathy open for a 46-yard completion to the Athens 15.

The next play appeared to be a tailback-option pass, but Adams, who took a pitch from Keane, pulled the ball down and scampered 15 yards to paydirt with 12 seconds remaining in the half. Poirier’s seventh PAT kick of the half made it 42-7.

Senior J.J. Babcock hauled in a 27-yard TD pass from Lister with 3:04 remaining in the third quarter, but just 60 seconds later, Adams busted loose on a 74-yard TD run to provide the final margin.

Lister completed 15 of 25 passes for 180 yards, two TDs, and one interception. Rude led Athens’ receivers with five catches for 85 yards, while Reid had four receptions for 40 yards, and one TD, and Babcock added three grabs for 53 yards and one TD.

Athens managed just 3 rushing yards on 25 carries, thanks in part minus-27 yards from Lister, who was sacked four times. Reid led the ‘Cats with 29 yards on 15 carries.