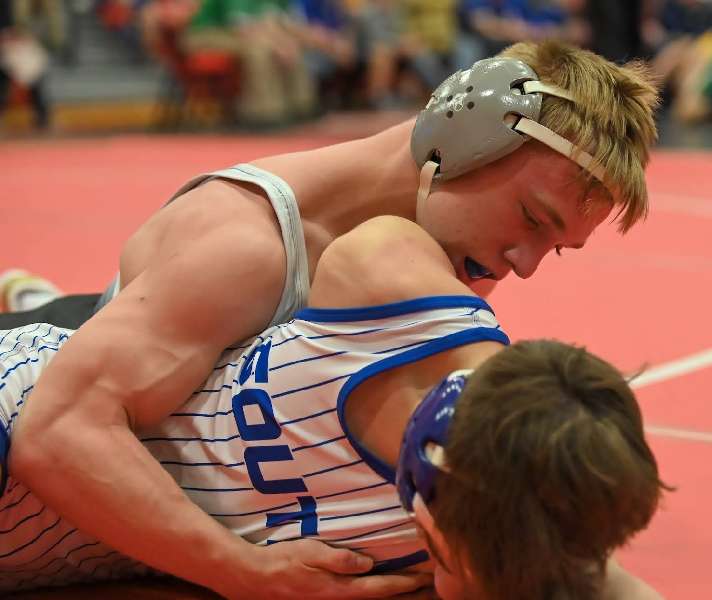 WILLIAMSPORT — It was a good day for Athens wrestling, but it could have been better. Four wrestlers made it through to regionals — the highest number of any team from the NTL, but none of them won their medal-round match.

Seniors Gavin Bradley (113) and Karter Rude (152) were both runners-up, while junior Jacob Courtney (138) was fourth, and sophomore Josh Nittinger (285) came in sixth.

They also lost Kaden Setzer to an injury. If he was healthy, there’s a good chance he would be have joined them.

“He did the best he could, but came up a little bit short,” said Bradley. “We had Josh step up as a sophomore, and he’d lost to that boy two or three times this year.”

Gavin Bradley lost to Montoursville’s Branden Wentzel, 5-3, on a late third-period takedown on a scramble with 30 seconds left in the match. Gavin Bradley took a 3-2 lead on a takedown during a scramble in the second, but after riding Wentzel much of the third he had to let him up.

Gavin Bradley pushed the pace on Wentzel, and nearly had him for takedowns several times, but Wentzel was able to wrestle on the edge of the mat, and get out whenever he was in trouble.

“We’ve got to survive or do better in the scrambles there,” said Bradley. “Finish a little bit quicker. We had to cut him there because Gavin had two cautions when he was riding him tough, but it is what it is, he’s got to learn from that and get better for next time.”

Rude was pinned by Montgomery’s Devon Deem in 3:01 after beating Lewisburg’s Chase Wenrich in the semifinals.

Deem used a strong single-leg attack to build a 6-2 lead in the first period. In the second, he kept at it, ultimately getting the fall.

“That kids a hammer,” said Bradley. “And Karter asked me, ‘what do I have to do?’ We just have to keep working. Karter’s got some good work out partners, Karter’s just got to pull the trigger. That kid took all the shots. Karter’s got to get after it, and take it to him. Karter’s got a good offense, but that kid is very good — Karter’s got to wrestle up to his level.”

Despite the setback, Rude is glad to be where he’s at.

“I’ve never had anything like this before, so I’m just trying to take it one step at a time,” he said. “Keep it nice.”

As for wrestling Deem, he plans on doing better next time.

“He was getting the single-leg on me, I need to work on defending that,” he said.

Courtney got a big win over Benton’s Caden Temple (3-1) to get to the third-place match, where he fell to Southern Columbia’s Kole Biscoe, 6-0. In the semifinals, Courtney lost to Warrior Run’s Cameron Milheim, 5-1.

Nittinger had an NTL kind of day, opening the elimination round with a 3-1 win over Towanda’s Jared Gunther, then pinning Canton’s Mason Nelson in 4:32 to get to the consolation semifinals.

Once there, he lost to Williamson’s Kade Sottolano 9-1, and then was pinned by Meadowbrook Christian’s Gunner Treibley in 1:42 in the fifth-place match.

Athens freshman 215-pounder Caleb Nason dropped a 6-4 decision to Montoursville’s Cole Yonkin in the first round of wrestlebacks Saturday morning.