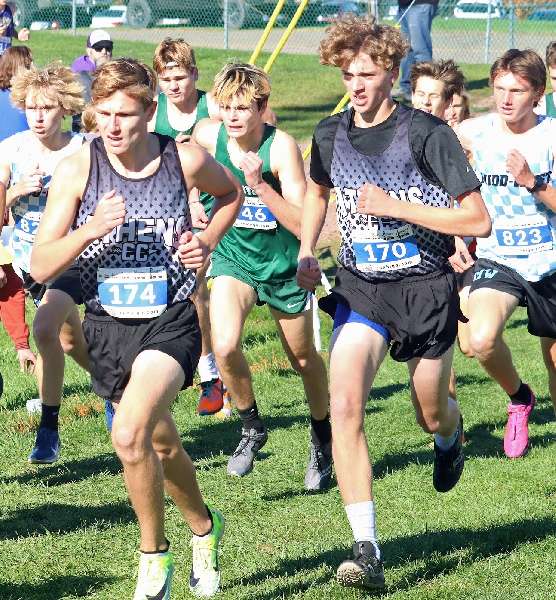 Bronson (20:40.7) was 10th overall in the race and the fourth individual qualifier.

“It’s awesome,” she said about earning another state berth as a sophomore. “It’s been one of my main goals all of this season, so I’m super excited to be there again.”

This was going to be one of the fastest races of Bronson’s season, and she went out aggressive.

“I wanted to really run hard, and put myself out there with some of the girls that I’ve run against before to try and get in the top 10,” she explained.

She did go out quick, running fifth at the first split, and seventh at the mile mark. She settled into eighth at the 2-mile, before dropping two spots further back at the finish.

“It just kind of happened,” she said about the quick start. “I just wanted to get myself in a good spot to start with, and that happened to be where I felt it was a little bit harder than I wanted it to be, but I think I got in a pretty good position.”

She plans on doing one more hard work before states, then resting up.

“I just want to make sure that I’m in top shape to run next Saturday,” Sara said.

The Wildcats took sixth as a team with 159 placement points.

Denlinger’s race was a bit of redemption after missing states by one second a year ago.

Denlinger knew coming in he was going to be on the bubble, and that didn’t change once he started running.

“I was a little nervous with my own counting, but my mom stood on the sidelines and helped me with numbers, so I’m grateful for that,” remarked Denlinger.

He had quite the finish, sitting 25th just after the two-mile mark, so he made up six spots in just less than 1,600 meters.

In the final stretch, he caught Midd-West’s Anden Atikins for 19th, not knowing if that would be the final spot.

“People kept telling me checkered (jersey), so I just kept on striving for him,” explained Denlinger.

He plans on working those famous Hershey hills at the state race.

“I’ve got long legs, so I’ve got to use my strengths in getting up those hills as fast as I can, and then taking the downhill,” said Denlinger.

The Wildcats were seventh as a team with 208 points.