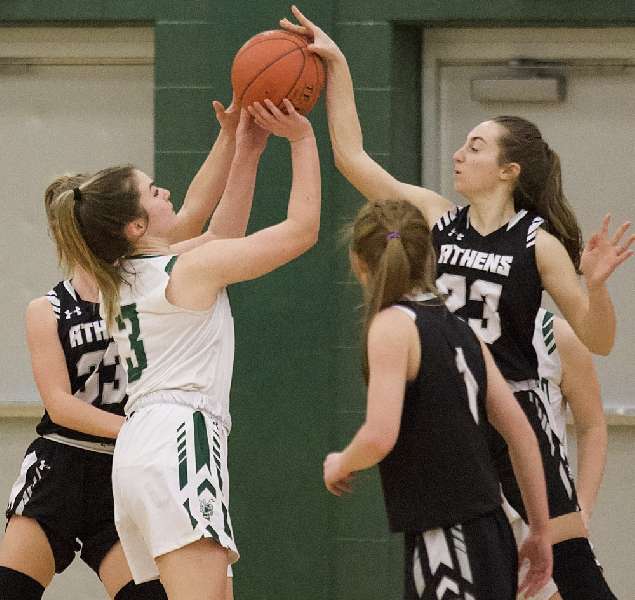 WELLSBORO — Thanks in part to a switch back to full-court pressure with five minutes remaining, Athens closed the game with a 16-2 run in a 52-37 win over Wellsboro here Monday night in NTL Large School Division girls basketball action.

After Wellsboro’s Ella Posada scored with 6:02 remaining to trim the Athens lead to one point, at 36-35, the Wildcats had three offensive rebounds in a row in an attempt to push the lead back to three points, but turned the ball over before it could get off its fourth shot of the possession.

Athens coach Brian Miller then called a time out, and put his team back into a full-court press.

“We wanted to pressure them the whole game, but we got into a little bit of foul trouble, so we had to take it off, which hurt our scoring opportunities,” he said.

“We wanted to turn up the pressure after the time out to create some more scoring opportunities, which we did,” added Miller. “And once (Emma) Coolidge fouled out, we dialed it up a little bit more.”

Wellsboro turned the ball over on its first possession after the time out when freshman Addy Wheeler came up with a steal and full-court pass to junior Emma Bronson for a lay-up to make it 38-35 with 4:09 remaining.

After a steal in the press, Macik scored in the low post off a nice entry pass from Wheeler, then added a free throw to complete the old-fashioned three-point play to make it 41-35 with 3:43 left in the game.

After another turnover, Bronson knocked down two free throws to make it 43-35 with 3:17 remaining, prompting a Wellsboro timeout.

Wellsboro quickly beat the Athens press on its next possession with Maddy Mascho’s lay-up closing the gap to 43-37 with 3:06 left in the contest.

After an Athens timeout, the Lady Wildcats began to milk the clock, and made 4 of 6 free throws to take a 47-37 lead with 1:20 remaining.

Following a Wellsboro turnover, Bronson connected with Macik on a “TD pass” off the in-bounds pass for a lay-up to make it 49-37 with 1:01 left in the game.

“Emma Bronson had a nice fourth quarter, and went 3-for-4 from the foul line,” said Miller,  “And, Caydence (Macik) was dominant in the second half.

“Aside from scoring, Addy (Wheeler) had the most solid game from start to finish — pressuring the basketball, getting the ball to girls in areas they can score, and not turning the ball over,” noted Miller.

“As a coach, I appreciate what she does,” added Miller. “It’s not all about scoring. She played a great floor game.”

Junior Karlee Bartlow made a free throw and a 3-pointer in the opening 70 seconds of the game to give the Lady Wildcats a 4-0 lead, and they never trailed.

On several occasions, Athens built their lead to six or seven points, only to have Wellsboro close the gap to one or two points.

“That’s a credit to them and their coach,” said Miller. “They are a good team, and coach Davis is an outstanding coach, who has been doing it for years.

“He knows how to keep the game close with his game plan, and give his team a chance to win.

“Every time we got the lead to a point where I thought we’d be in control, all the sudden here comes Wellsboro — they’re executing and we’re not,” added Miller. “Fortunately, we finished the game strong on a nice run.”

A bucket by Thompson pushed the Athens lead to 9-4 with 1:50 left in the first quarter.

After a bucket by Emma Coolidge trimmed the deficit to 9-6, junior Natalee Watson scored off a feed from Bronson, and sophomore Mya Thompson, off an assist from Wheeler, scored her third bucket of the opening stanza to make it 13-6 with just 10 seconds remaining.

The teams traded buckets until a pair of free throws by Coolidge with 1:53 remaining in the half, and a 3-pointer by Chloe Brandenburg with 20 seconds left closed the gap to 21-19 at the half.

With 4:50 left in the third quarter, Brandenburg knocked down another 3-pointer to trim the deficit to 26-24, but senior Olivia Bartlow, off an assist from Wheeler, and a Wheeler lay-up following a steal and coast-to-coast drive extended the lead to 30-24 with 3:45 left.

Wellsboro closed the gap to 34-33 in the opening moments of the fourth quarter on a pair of free throws by Coolidge, but Thompson scored on the break to make it 36-33, and Posada scored to set the stage for Athens’ game-closing blitz.

Macik led Athens with 23 points and eight rebounds, while Karlee Bartlow had 10 points and five boards, and Thompson had six points and one blocked shot.

With the win, the Wildcats keep their hopes alive for a second-place finish in the Large School Division, and a berth in the NTL Showdown.

“We have four games left and they will dictate whether we make the Showdown or not,” said Miller. “Hopefully, we beat Wyalusing, and the next game means something.”

Miller says his team is approaching every game as a playoff game, and he believes it will beneficial once the postseason rolls around.

“Playing games that count down the stretch to make your league final four is going to give us the pressure we need when it comes to the Showdown, or District play, where every possession determines whether we game to play another game or not,” he said.

Athens hosts Wyalusing Tuesday, with the varsity game at 6 p.m., and the JV game to follow.