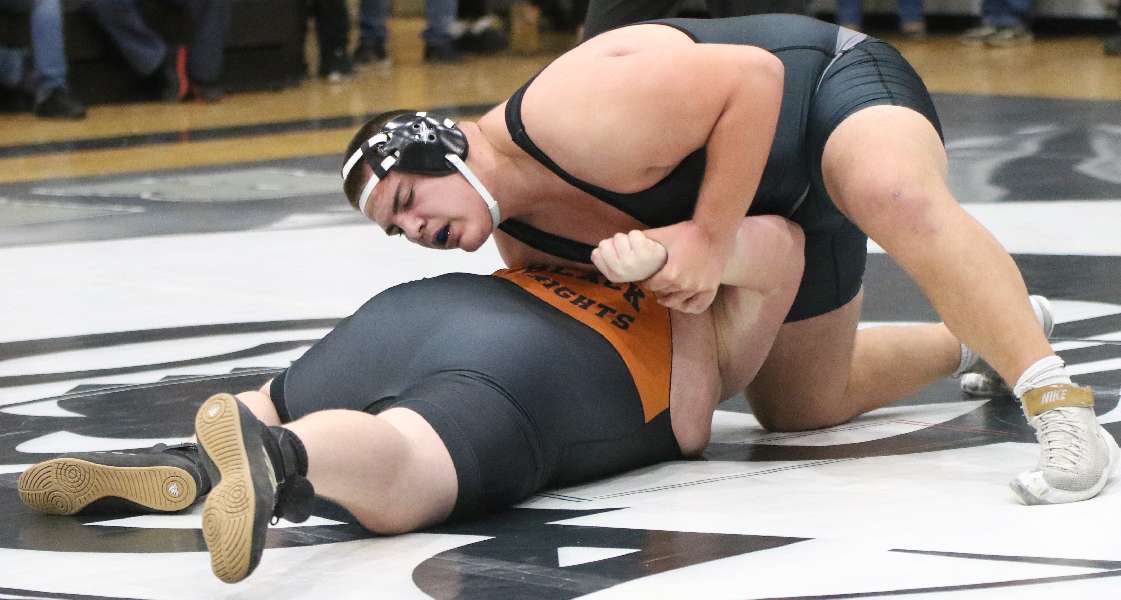 ATHENS — Athens crowned two champs, and will advance six wrestlers to next weekend’s District 4 Championships after a third-place finish here Saturday at the North Section Tournament.

Seniors Gavin Bradley and Karter Rude were North Section champs, while senior Kaden Setzer was forced to injury default after taking a big lead early in his title bout, and junior Jake Courtney gave up a takedown with 1 second remaining in overtime in his championship bout.

“Two champions is good,” said Athens coach Shawn Bradley. “We probably should have had four, but stuff happens.

“The big goal now is to get through this week, get to next week, and just keep moving on,” added Bradley.  “All four of those guys have aspirations, plus the other two who fought their way back through.”

Bradley, the top seed at 113 pounds, decked Sullivan County’s Rocky Finnegan in 66 seconds in the semifinals, then flattened second-seed Cohen Landis of Canton in 57 seconds in the finals.

Bradley, now 30-0 and ranked No. 1 in the state, will be tested at Districts, says coach Bradley. The 113-pound bracket will likely be topped by former state champion (106 pounds in 2020) Brandon Wentzel, who is 31-2 this season.

“Wentzel will be the first seed, and Gavin will be the 2-seed … the two highest point totals in the whole district are in the same weight class.

“Gavin is looking forward to it, and he’s working hard,” added Coach Bradley.

Rude, the second seed at 152 pounds, was dominant on his way to a title.

He pinned Wellsboro’s Jacob Dean in 13 seconds in the quarterfinals, then flattened third-seeded Jayden Renzo of Troy in 1:15 in the semifinals.

In the finals, top-seeded Bailey Ferguson of Canton scored the first takedown, but Rude relied to win an 8-3 decision.

Bradley said Rude is at the top of his game right now.

“(Karter) is working hard in practice, and he’s wearing kids out.

“He’s peaking at the right time, he just needs to keep it going,” added Bradley.

Setzer, the top seed at 132 pounds, pinned Wyalusing’s Cade McMicken in 1:32 in the semifinals, then used two sets of near-fall points to build a 9-2 first-period lead on second-seeded Seth Seymour of Troy, when he “tweaked” his knee during a scramble.

He tried to continue, but Bradley stopped the match after Setzer was unable to defend against Seymour’s takedown attempts.

“He got through this week. Now we work toward next weekend.

“That weight class is deep, so it may not matter one way or the other,” added Bradley. “He’s going to have to wrestle hard next weekend.”

Courtney, the top seed at 138 pounds, scored an 18-3 technical fall over Troy’s Ben Randall in 3:05 in the quarterfinals, then forged a 10-4 decision over Williamson’s Ayden Sprague in the semifinals.

In the finals, third-seeded Riley Vanderpool of Towanda built a 5-0 lead, but a reversal late in the second period closed the gap to 5-2.

After an escape late in the third period, Courtney scored a takedown with 8 seconds remaining to force overtime.

“It was a good scramble,” said Bradley. “Credit to (Riley Vanderpool), he fought through it, you can’t take that away from him. Jake just has to finish off that takedown in overtime.

“We were trying to push it too hard in overtime,” added Bradley. “He just needs to stay with his techniques.”

Nittinger, the third seed at 285 pounds, opened his day with a pin of NEB’s Kamden Ricci in 1:39 in the quarterfinals.

In the semifinals, NIttinger gave up back points late in the third period in a 5-3 loss to second-seeded Mason Nelson of Canton.

In the wrestlebacks, NIttinger forged a 15-1 major decision over Wellsboro’s Justice Harlan to advance to the third-place match, where he pinned Towanda’s Jared Gunther with 7 seconds remaining in the third period.

“Josh getting through (to Districts) for the first time is a big deal,” said Bradley. “And, it’s probably the best Josh has wrestled all year. We just need to keep building on that.”

“Josh is a knucklehead,” laughed Bradley. “He didn’t know the score. He said he thought he was losing, and that’s why he went for the big move. All he had to do was go to overtime.

“He was controlling the pace the entire match,” noted Bradley. “I thought we could have gotten a couple more stalling calls, but it is what it is.

“I bet he’ll remember the score of the match now,” added Bradley.

At 215 pounds, Nason’s day started in inauspicious fashion with a loss via second-period fall to Canton’s Connor Davis.

Nason decked Jamie Roman in 1:57, then won via injury default of NP-L’s Goerge Valentine to advance to the third-place match, where Davis again got the better of Nason — this time in a 12-7 decision.

“Caleb getting through as a freshman is a big deal,” said Bradley. “Caleb is as strong as a horse. He’s going to get better.

“He just needs to listen better during matches, and take advantage of opportunities,” added Bradley.

He dropped a 5-1 decision to fourth-seeded Skyler Manahan in the quarterfinals, but bounced back with a pin of NP-L’s Ryan Roupp in 53 seconds.  Forbes was eliminated in the consolation semifinals in a 6-4 loss to Towanda’s Sawyer Robinson.

Sophomore Mason Vanderpool was 0-2 on the day at 126 pounds.