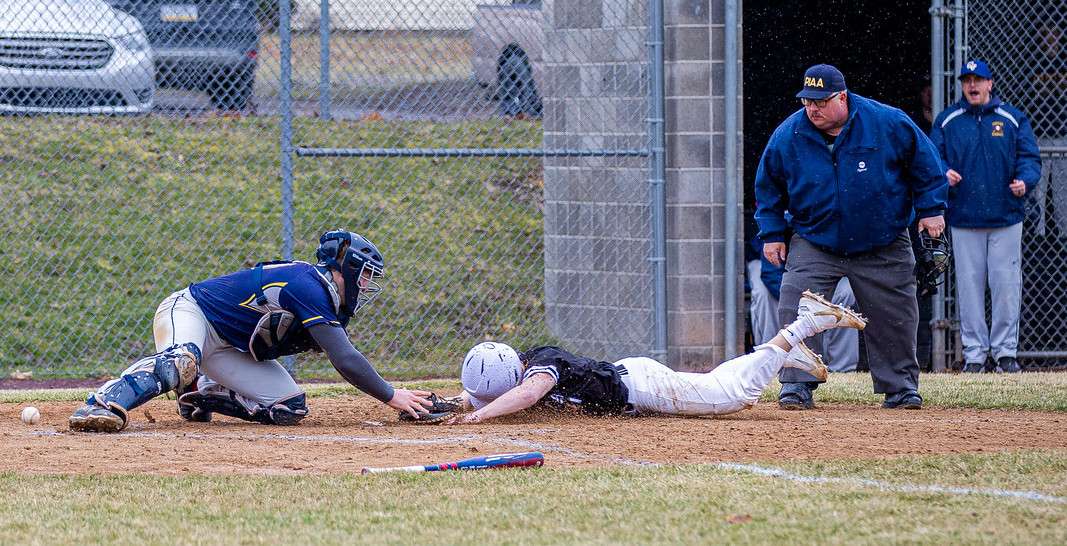 ATHENS — Senior Karter Rude helped Athens manufacture both of its runs, and juniors Lucas Kraft and Cameron Sullivan combined on a strong pitching performance to lead the Wildcats to a season-opening, 2-1, win over Cowanesque Valley here Friday afternoon.

“We had a plan to use our speed and really run the bases,” said Athens coach Charlie Havens. “It did move the runners really well.

“We could’ve used a few more hits, but that aggression (on the base paths) did lead to the winning run.” he noted.

Havens was pleased with his pitchers’ performance, and his team’s defense in a game that was visited by rain showers throughout.

"Lucas Kraft had a strong start, and really got tough with runners on base,” he said.

“Cam Sullivan was solid in relief,” noted Havens. “He came in with runners on first and third, and got out of the jam.”

“On a wet field, to only have three errors and give up one run, isn’t a bad start to the season,” added Havens.

After Kraft retired CV in order in the top of the first inning, Rude was hit by a pitch to lead off the home half of the frame.

Rude took second on a passed ball, and move to third on a groundout off the bat of junior Caleb Nichols. With two outs, Rude scampered home on an infield RBI single by Mason Lister to make it 1-0.

The Indians tied the game in the top of the third.

Coen Kemp and Carter Ackley led off the inning with back-to-back singles. With one out, Ackley, who was on second base following a fielder’s choice, stole third and score when the throw sailed into left field.

Kraft avoided any further damage with a strikeout, and a groundout to end the threat.

Nichols drew a one-out walk in the home half of the inning, and stole second, but was thrown out attempting to score on a single by Lister.

In the bottom of the fifth, Rude laced a line-drive, one-out single to left field. After stealing second and third bases, he scooted home on an RBI grounder off the bat of Nichols to make it 2-1.

In the top of the sixth, Kraft hit Kade Sottolano with a pitch to start the inning, then gave up a one-out single to Tucker St. Peter that advanced Sottolano to third base.

Sullivan relieved, and Nichols promptly threw out St. Peter attempting to steal second. Sullivan then struck out the next batter to end the inning.

“We put a cut play on with the steal to hold the runner on third, and it worked to perfection with a great throw to second by Nichols,” said Havens.

Senior Jaren Glisson ripped a two-out single to left field int he home half of the inning, then stole second, but was stranded there.

Sullivan struck out the first two batters in the top of the seventh inning, but with two outs CV’s Jordan Vargeson worked a two-out walk. Nick West followed with a bloop single to short right field, but pinch-runner Isaiah Bogsch was tagged out after a run-down between second and third to end the game.

Kraft earned the win for the Wildcats, allowing one run on six hits in 5 1/3 innings. He fanned six and walked none.

Sullivan recorded the save, allowing one hit in 1 2/3 innings of scoreless relief. He struck out three and walked one.

Painter was tagged with the tough-luck loss, allowing two runs — one earned — on five hits in five innings. He struck out four and walked one.

St. Peter pitched a scoreless inning of relief, allowing one hit and recording one strikeout.