ATHENS FALLS TO TOP-SEEDED SHIKELLAMY IN DISTRICT 4, CLASS 3A SEMIFINALS 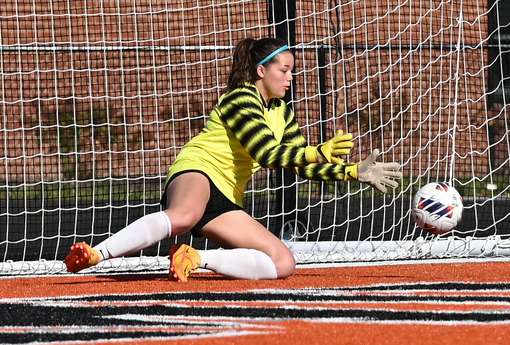 MILTON — Athens pushed top-seeded Shikellamy for 58 minutes, but the game got away from them late in a 5-0 loss here Saturday afternoon in the semifinals of the District 4, Class 3A girls soccer playoffs.

Athens coach Rich Pitts was pleased with his team’s performance, especially considering he threw a formation change at them on Thursday.

“I changed formations for the fifth time,” he said. “We had some breakdowns, and go caught a little bit, but we played pretty well over a full 80 (minutes).

“(Shikellamy) is a good team,” said Pitts. “They play a formation like Troy, so we had just seen it, and that helped us.

“I watched them on film twice, changed the formation, and gave it to the girls two days ago. We worked on it for two days, and I thought they executed it amazing.

“It was 2-0, then we’re pressing, so it’s ends up 5-0, but it’s not really 5-0,” noted Pitts. “We got caught in some counters with us pushing a little bit forward. We were pressing forward trying to get back into it, and that’s what you risk; you risk getting countered.

“We got beat 8-0 last year, and it wasn’t close. This game was close for 60 minutes,” added Pitts. “The final score is not indicative of the game.”

Elli Ronk scored the first half’s only goal in the 14th minute, and Shik took a 1-0 lead into the halftime intermission.

It was nearly 45 minutes before the Lady Braves added to their lead. Lily Persing, off an assist from Paige Fausey, scored with 21:33 remaining in the game to make it 2-0.

“Even when we got down 2-0, I thought we still had a chance if we could get a quick goal,” said Pitts. “We got into their end, and we just didn’t connect the final pass in the final third. If we had finished, it would have been 2-1 and we’re right back in it, but that’s the game.”

About five minutes later, Ronk scored again to make it 3-0.

With 5:35 remaining, Ronk finished off her hat trick to extend the lead to 4-0, and 3 1/2 minutes later, McKenna Zellers put the finishing touches on the Lady Braves’ win.

Shikellamy enjoyed a 20-5 advantage in shots-on-goal, and an 8-1 edge in corner kicks.

Athens finishes the season with an 8-10-1 record.

The Lady Wildcats will say good-bye to several seniors.

“It’s unfortunate, every year is a sudden ending, no matter what,” said Pitts. “This senior class is great.

“We had (Karlee) Bartlow coming out and giving us two years in goal, so as not to put that pressure on Carm (Pomaquiza) as a freshman and a sophomore, and working with her, and putting under her wing. Carm is going to be great next year.

“Obviously, Ally (Thoman), Taegan (Williams), and Taylar (Fisher), who’s been out with an injury, and Ashlyn Husted — that girl has gotten better and better with every practice and game,” added Pitts. “We’re going to miss that group.”

Pitts is already looking forward to 2023.

“I’m excited about this group coming up behind these girls,” he said.