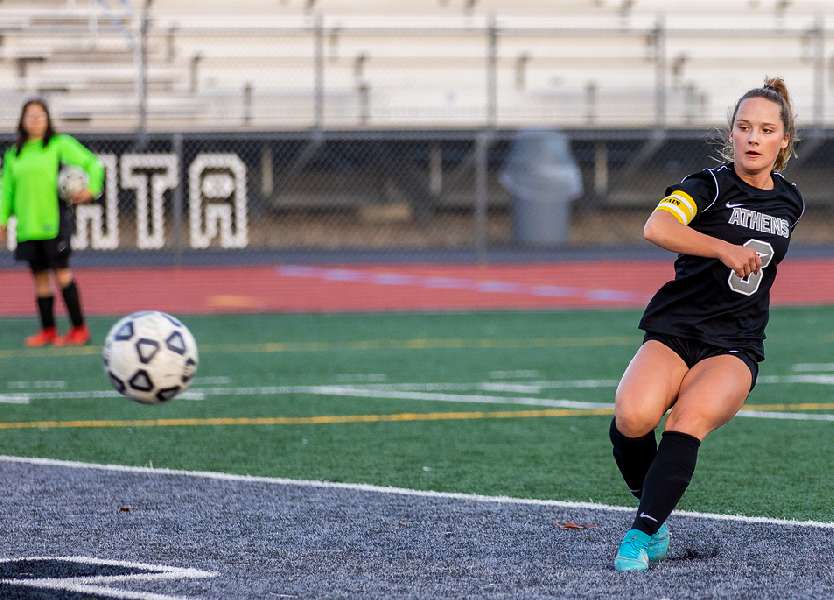 ATHENS — Athens held off a second-half rally to pull out a much-needed, 3-2, win over Wellsboro here Thursday evening in NTL girls soccer action at Alumni Stadium.

The win keeps the Lady Wildcats’ hopes of a league title alive. They are 8-2-1 in NTL play, trailing division-leading Troy (9-1-1) by one game. Troy hosts Athens Saturday at 2 p.m. in the regular-season finale.

I’m super-proud of the girls tonight,” said Athens coach Rich Pitts.  “After a tough game (6-0 loss at Bloomsburg), and a long ride home, they came out tonight and got themselves a great lead in the first half.

“We have two goals this year, and that is win the NTL and win districts,” noted Pitts. “Both are still in play.

“We will show up and play our hearts out Saturday against a very talented Troy team,” added Pitts. “We are excited for the challenge.”

Senior Ally Thoman took a cross from sophomore Addy Wheeler about 4 1/2 minutes into the game, split a pair of Wellsboro defenders, and punched a shot past the keeper to make it 1-0.

About six minutes later, Thoman took a through-ball from Wheeler, beat one defender, and fired a shot into the back of the net to make it 2-0.

With 12:07 remaining in the first half, Wheeler took a feed from Thoman, and fired a shot from about 12 yards out to extend the lead to 3-0.

“I thought we controlled much of the game and played great soccer when in possession,” said Pitts.

Sara Seeling scored about five minutes into the second half, then scored again with 8:09 remaining in the contest to pull Wellsboro within a goal, at 3-2.

“Hats off to Wellsboro,” added Pitts. “They battled us to the end and made it interesting, but in the end we got an important win.”