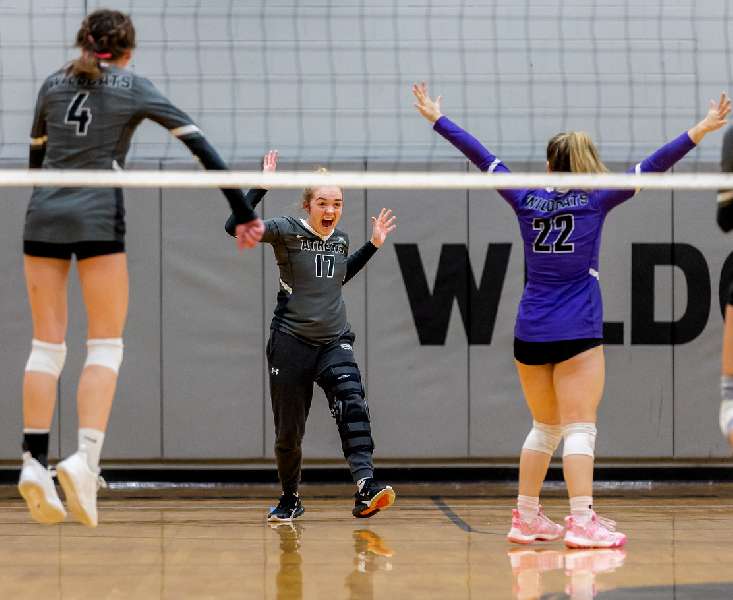 ATHENS — A week ago, Athens had its back to the wall, needing to win its final three matches to qualify for the upcoming District 4, Class AA volleyball playoffs. After an emotional four-set win over Towanda Thursday night, the Lady Wildcats now only need to win their season finale at Wellsboro.

“It was Senior Night tonight, and it was pretty emotional,” said Athens coach Heather Hanson. “What was so amazing and really hit me was, how loved these five seniors are and how amazing they truly are.

“You get so focused in the season you forget they are teenage girls playing a sport they love,” she noted. :Then you have Senior Night and remember all of it.”

“The girls played as a team tonight again just like at Troy,” added Hanson. “Sometimes, when you have these nights honoring certain players other players have a tough time handling that — not this team. They really supported one another.”

The fourth set ended with senior Braelynn Wood, who suffered a season-ending knee injury earlier this season, at the service line, her leg adorned by a bulky knee brace. She served the match-ending point.

“Braelynn Wood was allowed to serve the game point in the fourth set, and that’s when I lost it,” said an emotional Hanson. “I really think that spoke to everyone —  play hard and support each other because you never know when it could be your last game. Braelynn Wood was the MVP tonight.”

“We have a new addition to the team in Gretchen Schmeig, and she played outstanding ball tonight already,” said Hanson. “Izzy Davis also stepped up big and played front and back row exceptionally.”

Athens, now 7-8, closes out the regular season Tuesday at Wellsboro.