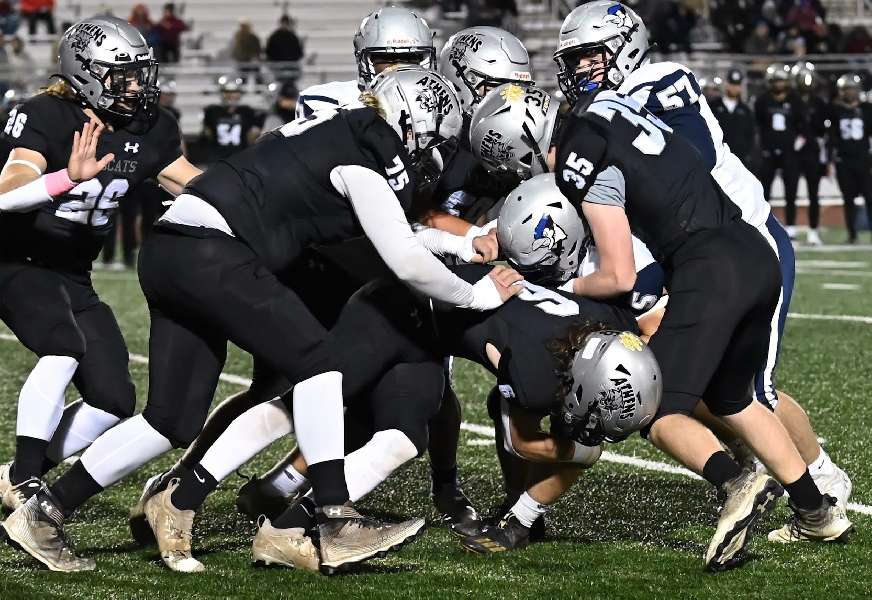 ATHENS — Athens’ defense had times when it bent but didn’t break, and it came up with a pair of timely turnovers to lead the Wildcats to a 17-10 win over Central Columbia here Friday night in non-league football action at Alumni Stadium.

“I couldn’t be happier with our defense,” said Athens coach Jack Young. “We didn’t play great defense tonight. But, we kept them out of the end zone.

“We knew (Central Columbia) was going to come in and be tough,” noted Young. “They’ve played some people tough for halves. They’ve been real physical. You can see it on film. We knew we were going to be in a dog fight.”

The Blue Jays opened the game with a bit of trickery, but sophomore Caleb Nason recovered an onside kick attempt at the Athens 45.

Three plays later, Athens punted the ball away, and Central Columbia took advantage of a short punt to start at its own 38.

With Gage Chipelski and Grayson Shaud doing the majority of the leg work, the Blue Jays drove the ball into the Athens red zone. However, the Athens defense stiffened, and Blake Maguire booted a 36-yard field goal to give Central Columbia a 3-0 lead midway through the first quarter.

Midway through the second quarter, Central Columbia was on the move again, when senior Lucas Horton stepped in front of a Shaud pass at the Wildcat 28, and returned it to midfield.

Four plays later, senior QB Mason Lister, who eclipsed the 5,000 yards in career passing yardage in the game, connected with senior Matt Machmer on a 36-yard TD strike. Lister’s PAT kick gave Athens a 7-3 lead that it carried into the halftime locker room.

The Blue Jays came out of the intermission, and put together a 19-play drive that the Wildcats snuffed out in the shadow of their end zone — at the 1-yard line.

Athens had very little success on the ground in the game, but on this possession found some running lanes and moved the ball out to its 37.

On second-and-eight, Lister hooked up with senior tailback Caleb Nichols in the flats for a 51-yard gain to the Blue Jay 12.

A QB sack left the Wildcats facing fourth-and-14, but Lister split the uprights with a 33-yard field goal to make it 10-3 early in the fourth quarter.

Two plays after the ensuing kickoff, Machmer scooped up a Blue Jay fumble and raced 32 yards to paydirt. Lister’s PAT kick made it 17-3.

Central Columbia answered with a quick scoring drive, culminating with an 11-yard TD pass from Shaud to Logan Welcom with 3 minutes remaining.

After Nichols recovered the ensuing onside kick attempt, he picked up 9 yards and 5 yards on consecutive carries, which allowed the Wildcats to finish off the game in victory formation.

Nichols had three catches for 57 yards, and Machmer had four grabs for 49 yards and one TD.

The Blue Jays had a 298-182 advantage in total offense, including 175 yards on the ground to Athens’ 55, but committed three turnovers, while Athens did not commit a turnover.

Shaud completed 12 of 20 pass attempts for 123 yards, one TD, and one interception, with Dylan Greggory’s four catches for 41 yards leading seven different receivers who caught at least one ball.

Chipelski led the CC ground game with 67 yards on 14 carries, and Shaud added 55 yards on 15 carries.

Athens, now 6-3, still does not have a game for next weekend, so will prepare for a District 4, Class 3A quarter-final game the following weekend.