ATHENS RALLIES TO EDGE NEB, 2-1, IN ANNUAL 'PINK OUT FOR SARAH REID' GAME 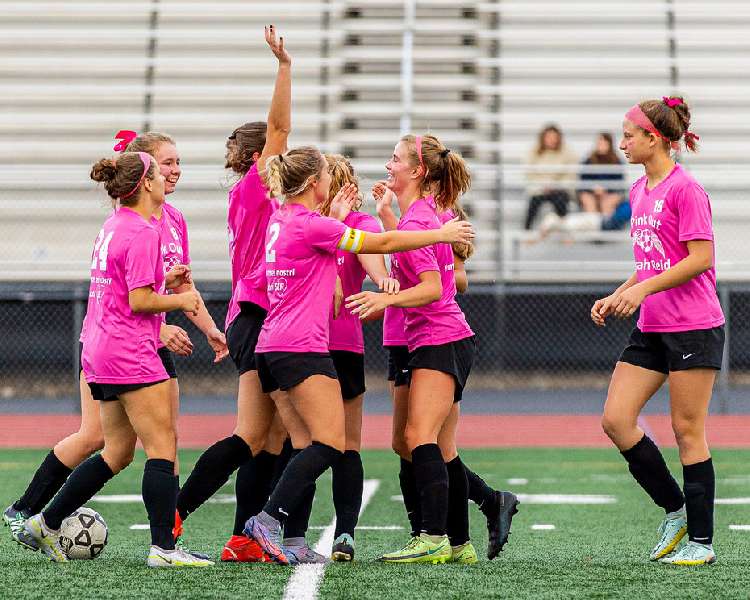 ATHENS — Senior Ally Thoman scored a second-half goal to help Athens overcome an early NEB goal on its way to a 2-1 win in the annual “Pink Out for Sarah Reid” game here Wednesday evening in NTL girls soccer action at Alumni Stadium.

“It was a great victory over a very good NEB team on Sarah Reid Pink Out night,” said Athens coach Rich Pitts. “NEB came in with a great game plan, and really came at us the first 20 minutes.

“We were able to survive, then get a goal back before half to help us settle in.

“In the second half, I thought we played pretty good soccer,” noted Pitts. “We were moving the ball around and doing a lot of the things we work on every day in training.

“We got a nice goal by Ally (Thoman) in the second half, then we clamped down only allowing a few chances by them to finish out the game,“ Pitts added.
The win also avenges a 4-2 loss to NEB earlier this season for the Lady Wildcats.
The Lady Panthers took lead about 8 1/2 minutes into the game on a goal by Lizzie Gorsline, off an assist from Keirra Thoman.

With 6:19 remaining in the first half, Ally Thoman fed a ball over NEB’s back line, and sophomore Addy Wheeler collected it, and with three defenders on her heels, fired a shot into the back of the net to tie the game at 1-1.

With 26:51 remaining in the contest, Ally Thoman rocketed a shot from about 15 yards out into the net to give the Lady Wildcats a 2-1 lead.

The “Pink Out for Sarah Reid” is played annually to honor Sarah Reid, a 2012 Athens Area grad who was killed in a car accident in the fall of 2012.

The game has been every year since 2012 and the Lady Wildcats have an 11-0 record in those games.

“I know Sarah would of been proud of the girls tonight as they played hard in her honor,” said Pitts.