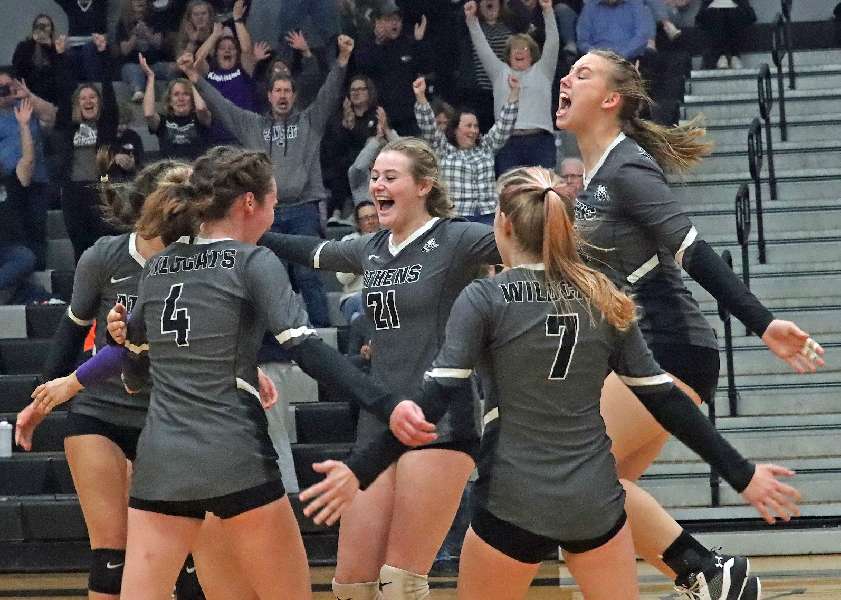 “It feels amazing,” said Wildcat senior Jenny Ryan. “Usually, we don’t get this far in districts, but we just really wanted it, so it feels really good to get this.”

However, Athens out pointed them 7-3 after that to get the 25-22 deciding set victory.

Ryan finished with 21 assists, 10 digs, eight kills, six blocks, and three points — picking up two crucial fourth-set points on a block and kill that led them to the win.

“It was just a huge momentum boost because we were down seven points in serve-receive passes,” said Ryan. “I was like, ‘OK, I’ve got to do something.’ And I think that just boosted our momentum a lot.”

They were strong defensively all match long, with 18 blocks, and 65 digs.

“Our blocking on the outside has really stepped up,” said Athens coach Heather Hanson. “Cassy Friend has been a force, as far as blocking.”
Seniors Cailin McDaniel, Cassy Friend, Audrey Clare, and Ryan combined for the majority of the blocks on the day.

“Their timing is great,” said Hanson.

And on the back row she complimented sophomore Ella Coyle’s leadership.

“(She) really stepped in today with digging everything,” said Hanson. “Just taking that back roll on.”
Coyle finished with 16 digs, four points, and three aces, while Clare finished with a team high 11 kills, four blocks, two assists, eight digs, and one point.

Kassie Babcock had six kills, 14 digs, three points, two aces, and was 10-for-10 in serve receives, and Keaton Wiles finished with three kills, three digs, and one block.

From there, the Panthers out scored them 5-1 to take the first set home.

“That first game, when we just couldn’t break away I was like, ‘oh boy,’” said Hanson. “We can play with confidence at some points, if it’s like 10-point lead, but when it’s a little sketchy, it starts to be that careful play and stuff.”
They played with confidence the next two sets, leading both from the first serve to the last point.

The final set looked like it was going to be a blow out as they jumped out to a 9-point lead, but NEB rallied behind the serving of Gabby Susanj, who had five aces in a row, and six during her serve, to make it 17-17.
Ryan would end the run with a block, but NEB tied it back up again as an Athens push kill was out.

A kill would give NEB a 19-18 lead, but that’s when the Wildcats went on a 3-0 run thanks to back-to-back kills from Clare and Ryan, while Babcock followed with an ace to give them a 2-point lead.
The two teams traded service errors, followed by two straight missed attacks from Athens to knot it up at 22-all.

However, a service error from NEB put Athens up 23-22. Ryan then had a decisive block for the 2-point lead, and an attack into the net from NEB ended the match.

Hanson believes that the fourth set was a learning moment for her team.

“That’s all I’ve been talking the girls this whole season is, it’s how we react to if we’re not winning, we’re learning,” she said. “How do you react if you don’t win a rally, and sometimes it seems like we have to have these four or five point things before we’re like, ‘oh, maybe it’s time to turn it around.’ We can’t do that, and we can’t do that again.”
Athens will now get the top seeded NP-Liberty Mountaineers Tuesday, back at its home gym. NPL went undefeated in the league for the sixth year in a row, but the Wildcats feel they can match up with them, as they lost two of the matches by just a few points.

“It’s all about momentum in this last game, especially against Liberty,” said Hanson. “And all I ask of the girls is to leave it all out there, but with their voices. We have the skills.”

They hope to lead with their defense once again, as that will be the focus at practice on Monday.

“I think that we just really need to work on our defense,” said Ryan. “Come into Liberty prepared, and show them what Athens volleyball really is.”