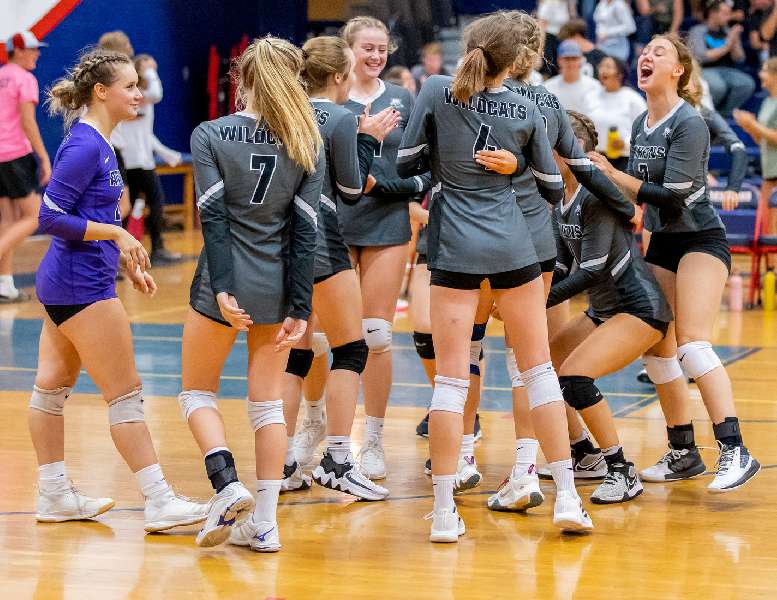 The Lady Redskins did not play like a team searching for its first win. After dropping the first set, 25-13, Sayre bounced back to win the next two sets, 25-21 and 25-21.

The Lady Wildcats re-grouped and evened the match with a 25-18 win in the fourth set, then pulled out a 15-11 win in the decisive fifth set.

“Oh my goodness what a game,” said Athens coach Heather Hanson. “Sayre played incredible tonight, they would not let the ball hit the floor. They totally wanted it and came back with fire after the first game.

“We were pretty full of it after the first game and Sayre shut us down, not once but twice actually, and  almost a third time,” noted Hanson.”

Hanson gave kudos to Ryan and Clare after the win.

Jenny Ryan played and all-around incredible game,” she said. “High in kills, and second in digs, while also running the court and being a leader.

“Audrey Clare’s serving in the third game got us our spark back,” noted Hanson. “Even though we lost the third game, it reminded everyone we are a good team and we can do this.

“Overall, I was really encouraged by our strong serving,” added Hanson. “We had 105 serves and only missed 10 — that’s incredible.”