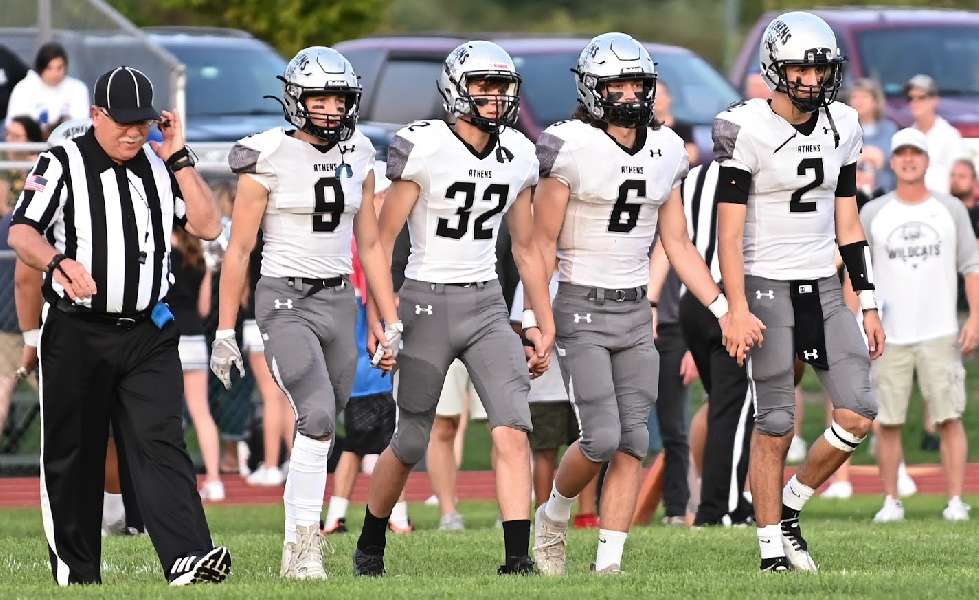 Senior Caleb Nichols put the Wildcats on the board in the first quarter with a 14-yard TD run. Senior Mason Lister split the uprights with the PAT kick to make it 7-0.

Nichols scored again early in the second quarter, this time on a 6-yard TD run to make it 14-0.

Junior Kaden Parrish scored on Athens’ next possession, busting 10 yards up the middle. Lister PAT kick made it 21-0.

The next four Wildcat scores came on the arm of Lister, who completed 7 of his 9 pass attempts for 198 yards and four TDs.

Lister connected with sophomore Xavier Watson on a 64-yard TD pass late in the second quarter to make it 28-0.

In the final minute of the first half, senior Lucas Horton hauled in a 33-yard TD pass. Lister’s fifth PAT kick of the half made it 35-0.

Early in the third quarter, Nichols hauled in a 30-yard TD pass out of the backfield. Lister’s kick made it 42-0.

Watson’s second TD grab, this one for 25 yards, gave the Wildcats a 48-0 lead entering the fourth quarter.

Sophomore Keegan Congdon provided Athens’ final TD of the night with a 6-yard run. Lister tacked on the PAT kick to make it 55-0.

Moments later, Wyalusing’s Joey Gonsauls raced 87 yards with the ensuing kickoff to put the Rams on the board. Zach Fenton’s PAT kick provided the final margin.

The Wildcats rushed for 200 yards in the win, with Nichols leading the way with 86 yards and two TDs on seven carries. Congdon added 32 yards and one TD on five carries, and Lister chipped in with 27 yards on five carries.

Watson led Athens’ receivers with two catches for 89 yards and two TDs, while Horton had two grabs for 52 yards and one TD.

Defensively, senior Bradley Bouck had an interception for the Wildcats.