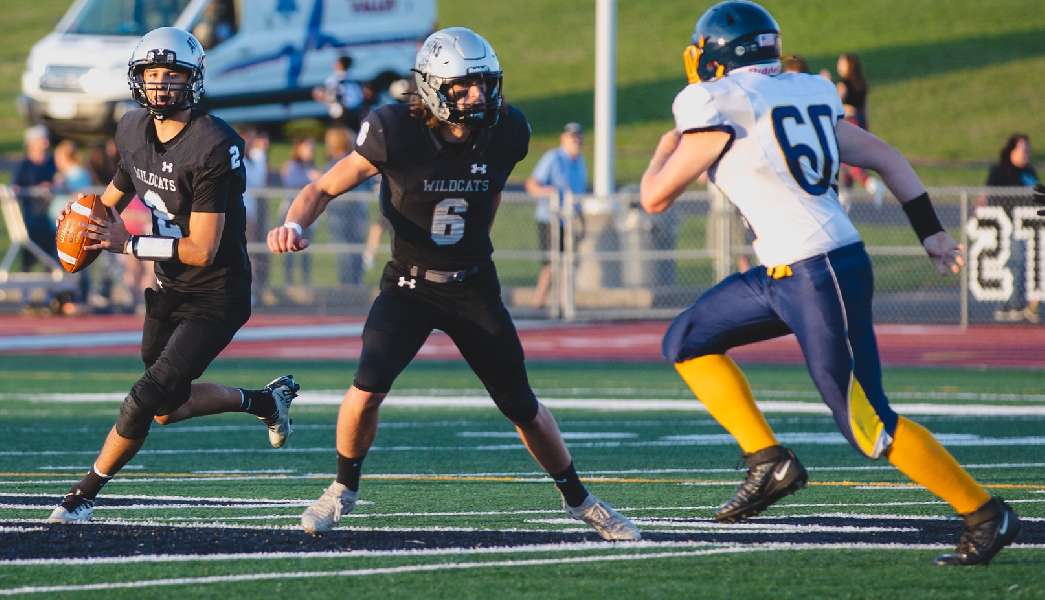 “We were better tonight, but we were far from perfect,” said Athens coach Jack Young.

“We worked on our spread running game this week, that was one of the things we wanted to accomplish, and I think we did a pretty good job,” said Young.

One of the keys in the win, said Young, was giving Lister time to throw, a luxury he was not afforded in the Week 1 loss to Executive Education Academy.

“We had some breakdowns, but again pass protection is an on-going process,” said Young. “We saw a big improvement on the offensive line this week.

“We have some depth on the offensive line, so we’ve been moving people around to see what group fits best,” he added.

Nichols led the Athens ground game with 96 yards and two TDs on seven carries, and Keathley added 90 yards and one TD on four carries. In all, the Wildcats had 198 rushing yards on 17 carries.

Cowanesque Valley lost nine yards on its first possession, and punted the ball away.

On the next play, Nichols broke through the right side of the line, slid to the sideline, and raced 46 yards to paydirt. Lister added the PAT kick to make it 7-0 with 6:11 remaining in the first quarter.

“(Caleb) is sneaky back there,” said Young. “He’s a little different than some of the backs we’ve had. He’s slick hitting the holes, and does a nice job.”

The Wildcats forced another CV punt on its next possession, and sophomore Kolsen Keathley returned it 35 yards to the Indian 21.

Following another CV three-and-out, Athens took over at its own 49.

The Wildcats lost nine yards on the first play of the possession, but completions of 14 and 5 yards from Lister to Martin, sandwiched around a 27-yard run by Nichols moved the ball to the CV 14.

On the first play of the second quarter, Lister dropped the ball over the defensive line to Martin on a middle screen, and he weaved his way into the end zone for a 14-yard TD completion. Lister’s PAT kick made it 21-0 with 11:52 remaining in the first half.

CV’s next possession ended on downs when a pass attempt on a fake punt fell incomplete, giving the Wildcats the ball at CV 38.

On CV’s first play of the ensuing possession, sophomore Tim Freeman was sacked and stripped of the ball by Athens sophomore Caleb Nason. Senior Austin Malanoski scooped up the fumble and rumbled 10 yards to the Indian 8.

On Athens’ first play, Lister found Watson open in the end zone for an 8-yard TD connection. The PAT kick made it 35-0 with 8:08 remaining in the half.

CV picked up its first three first downs of the game on its ensuing possession, with Freeman and Fletcher Good alternating carries from the Indian 39 to the Wildcat 16.

On second-and-4 at the Athens 16, CV QB Graham Hess was sacked and stripped by Glen Romberger, with Martin pouncing on the loose ball to end the drive.

With the “mercy rule” in effect to start the second half, Athens chewed up nearly half the third quarter with a seven-play scoring drive to up its lead to 41-0.

The key plays in the drive were a 28-yard run by Keathley, an 11-yard scramble by Lister, a 12-yard pass from Lister to Horton.

The Wildcats capped the drive with a 16-yard TD pass Lister to Horton with 6:21 left in the third quarter.

After another CV three-and-out, Keathley capped a penalty-filled possession with a 48-yard TD run with 15 seconds left in the third quarter. Lister’s PAT kick provided the final margin.

The Indians had another three-and-out in its next possession, but got the ball back one play later thanks to an Athens fumble.

CV picked up three first downs, including a 4-yard run by Carter Ackley on fourth-and-4, and drove the ball to the Athens 10, before turning it over on downs on the final play of the game.

Good led the CV ground game with 28 yards on 11 carries, and Freeman added 22 yards on 12 carries. In all, the Indians rushed for 37 yards on 41 carries, thanks partly to several QB sacks, which count as rushing yards.

Hess completed 3 of 9 passes for 19 yards, with Ackley hauling in two for 8 yards, and Good grabbing one for 11 yards.