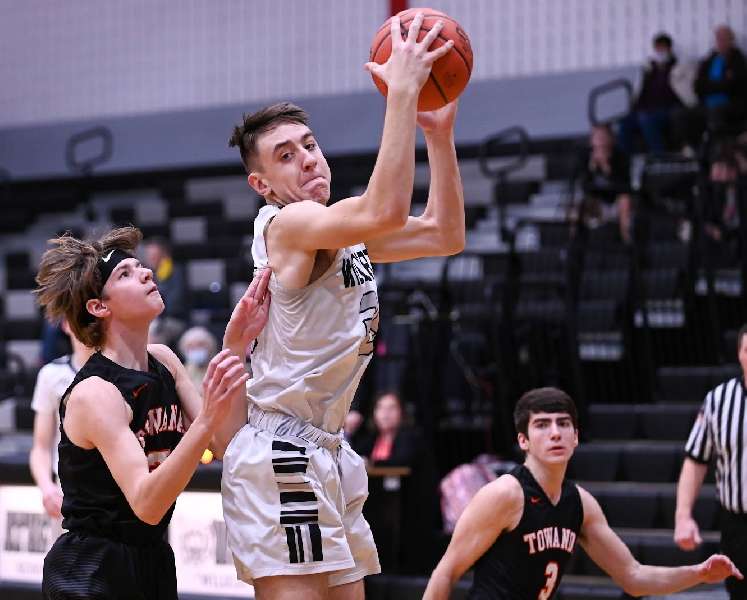 ATHENS — Athens shook off a rough first half, and a poor shooting night at the free-throw line to post a 70-60 win over Towanda here Thursday night in NTL Large School Division boys basketball action.

“Offensively, we were not as crisp as I would have liked in the first half and we missed a ton of foul shots tonight,” said Athens coach Jim Lister. “I will never be happy about that.

“We made some halftime adjustments and came out and played a much better second half and got the win,” he added.

“First, I want to give a ton of credit to Coach Landon Henry,” said Lister. “He is young and has ton of energy and his kids are buying in.

“They are going to beat some teams this season on just effort and hard work,” added Lister.

Athens senior guard Tucker Brown scored the first seven points of the game, but Towanda used an 18-4 blitz to take an 18-11 with 1:45 remaining in the first quarter.

Brown made one of two free throws early in the second quarter to tie the game at 18-18, and Carling made one of two free throws with 5 1/2 minutes remaining in the first half to give Athens the lead for good, at 22-21.
Athens made 20 of 41 free-throw attempts in the game.
Buckets by Brown and junior Chris Mitchell made it 26-21, and a pair of free throws by junior Chris Mitchell with 55 seconds remaining in the half gave the Wildcats a 30-25 lead.

Athens pushed its lead to six points, at 34-28, in the opening moments of the second half on a bucket by Brown, but the Black Knights used a 6-1 spurt to close the gap to 35-34.

Carling, off an assist from junior Mason Lister, scored to spark a 6-0 spurt that pushed the Athens lead to 41-34.

A technical foul against Towanda with 2 minutes left in the third quarter resulted in a free throw by Brown, and two more by Babcock to push the lead to 45-36.

Lister, off a feed from Carling, and Pritchard, off an assist from Lister, scored back-to-back buckets to spark a 10-2 run that put the Wildcats up 55-45 5 1/2 minutes remaining in the game.

The Black Knights closed the gap to 67-60 in the final minutes, but the Wildcats mad three of six free throws down the stretch to seal the win.