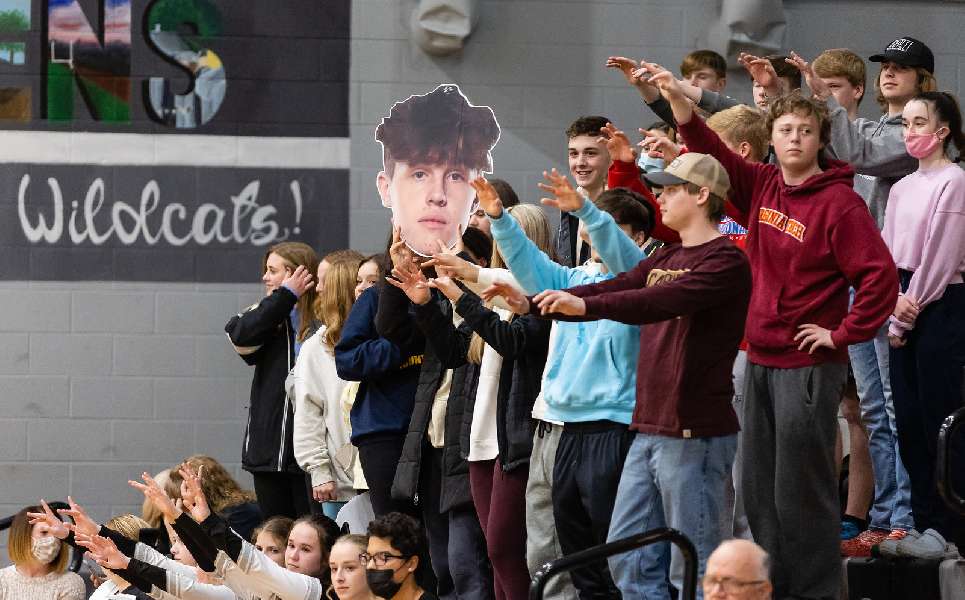 ATHENS — Athens overcame a slow start with a big third quarter, let a 14-point lead slip through its fingers, then pulled out a 56-49 win over North Penn-Liberty here Tuesday night in NTL boys basketball action.

It was the second win in as many nights for the Wildcats, who topped division-leading Troy Monday night.

“Whenever you win a big game, like we did (Monday) night, you’re always concerned when you have to come back and play another game 24 hours later, especially against a good team,” said Athens coach Jim Lister.

“It’s just not easy, but the kids battled through it tonight, and I’m proud of them.

“I hate to say it, but most times when you come off a big win that next game can be a bit of a struggle,” noted Lister.

“For us, it was a struggle offensively in the first half, but we had a big third quarter,” continued Lister. “We started pounding the ball inside and getting some lay-ups.

“We got a little sloppy and let them back into the game, but the kids were able to close it out,” added Lister. “Like I said, it’s not easy to come back and win 24 hours after a big win like last night.”

The win is also a bit of redemption for the Wildcats, who lost at North Penn-Liberty in each of the last two years.

“We did not take them lightly,” noted Lister. We knew they are a good team, and they are well-coached. We knew we’d have to play well to beat them.

“The kids are responding right now. I’ve been saying all season the NTL is extremely tough, there’s a lot of good basketball here, and you have to play well every night,” added Lister. “And, we’ve played pretty well the last two nights.”

Babcock knocked down a 3-pointer early in the first quarter, and scored five points to help to a 12-8 lead after the first eight minutes.

The Mountaineers rallied with a 15-10 run in the second quarter, taking the lead, at 23-22, in the closing moments of the first half on a pair of free throws by Derek Litzelman.

Athens re-gained the lead on its opening possession of the second half on a lay-up by senior Troy Pritchard, off a nice feed from Babcock.

The teams traded multiple turnovers over the next two minutes, before senior Nalen Carling came up with a steal and lay-up to make it 26-23 with 5:40 remaining in the third quarter.

After a bucket by Babcock in transition made it 28-23, NP-L’s Noah Shedden made 1 of 2 free throws to stem the tide momentarily.

Moments later, Babcock fed Carling for an uncontested lay-up, then a blocked shot by junior Mason Lister turned into a fast-break dunk by Babcock to make it 32-24 with 4:39 left in the third quarter.

Consecutive buckets in quick succession by Carling, Lister and Babcock made it 38-24 with 3:44 remaining in the third quarter.

Hunter Thompson’s 3-pointer with 3:04 left in the stanza was NP-L’s first field goal of the half, and also triggered a 17-2 run that gave the Mounties a 41-40 lead early in the fourth quarter. The run was capped by Kyle Davis’ 3-pointer with 6:58 remaining in the contest.

Thirty seconds later, Carling scored from point-blank range, and added the free throw to complete the three-point play to extend the lead to 47-42.

A pair of free throws, and a driving lay-up by Litzelman closed the gap to 47-46 with 4:08 left in the contest.

After an Athens turnover, senior Tucker Brown came up with a steal and converted it into a lay-up to make it 49-46 with 3:40 left in the game.

Following a defensive stop, the Wildcats extended the lead to 51-46 on a tip-in by Babcock on the offensive glass.

After an exchange of turnovers, Lister converted an old-fashioned three-point play to make it 54-46 with 1:55 left in the game.

After NP-L missed its next shot, Athens rebounded and was able to run out the clock.