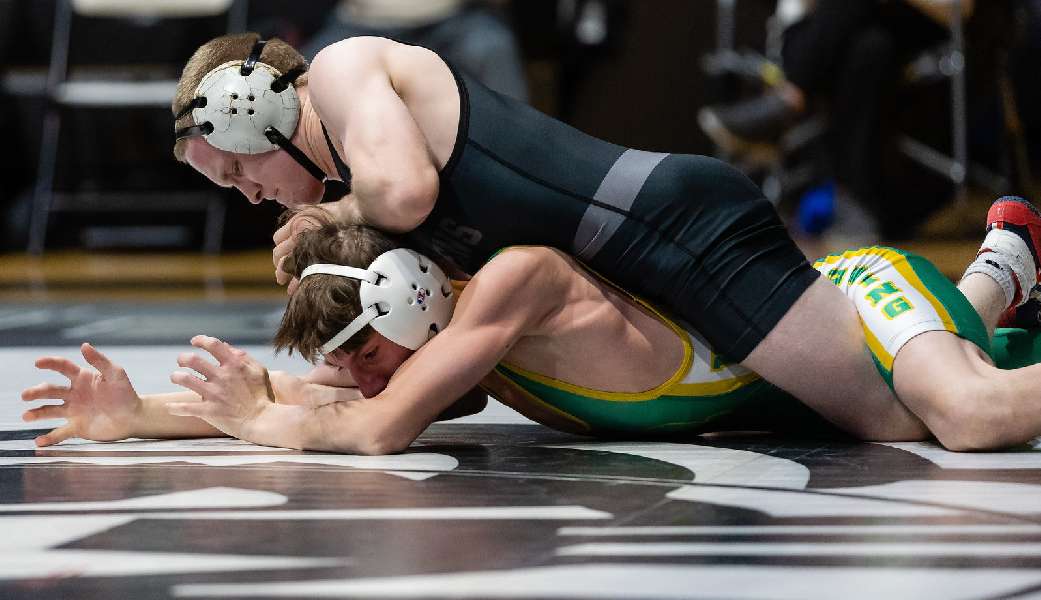 ATHENS — There are two keys to winning dual meets: unheralded wrestlers stepping up with big wins, and those same wrestlers avoiding giving up bonus points if they don’t win.

Athens checked both those boxes Friday night in a 32-30 win over Wyalusing in NTL wrestling action.

“It was a great team effort. We wrestled well today,” said Athens coach Shawn Bradley. “We beat a really good team that has a really good record.

“We had to move around a lot today, so we had a lot of guys step up.

“Lucas Forbes and Cameron Whitmarsh came up big, and Keaton Sinsabaugh won the darn match,” added Bradley. “Those kids don’t get a lot of the accolades or the glory, but the bottom line is to win dual meets everyone has to perform.”

With the win, the Wildcats improve to 7-2.

“We’re trying to get to Milton (District 4 Duals semifinals) for the first time,” said Bradley. “In order to do that, we have to win some dual meets.”

Senior Kaden Setzer opened the match with a 36-second pin of Isaac Shaffer at 132 pounds, and junior Jacob Courtney locked up Cade McMicken in a cradle at 4:35 in their 138-pound match to put the Wildcats up 12-0.

“Two of our hammers (Kaden Setzer and Jake Courtney) got us started,” said Bradley.

Senior Karter Rude put Wildcats back up by nine, at 18-9, with a pin of Jordan Lamb at 160 pounds.

Alex Hunsinger triggered a mini run for the Rams with a 5-1 decision over Whitmarsh at 172, and Brian Arnold followed with a 56-second fall at 189 to tie the match at 18-18.

Nicholas Woodruff received a forfeit at 215 pounds to give Wyalusing a 24-18 lead, but sophomore Josh Nittinger tied it at 24-24 with a 61-second fall over Zach Fenton at 285 pounds, setting the stage for Sinsabaugh.

Evan Johnson scored the first takedown in the 106-pound bout, but Sinsabaugh battled back. In the closing seconds of the third period, Sinsabaugh went head-hunting and flipped Johnson, who was riding top, off his back for a reversal to win an 8-6 decision, giving the Wildcats a 27-24 lead.

Wyalusing had an opportunity to send Clayton Carr out to receive a forfeit at 113 pounds, but chose to bump him up to face senior Gavin Bradley at 120 pounds.

The unbeaten Bradley put on a takedown clinic, scoring 11 takedowns in a 23-8 technical fall in 5:18 to sew up the win for the Wildcats.

Wyalusing’s Ayden Hunsinger closed out the match with a third-period pin of sophomore Mason Vanderpool to provide the final margin.