BIG SECOND HALF PROPELS ATHENS TO 34-0 WIN OVER TOWANDA 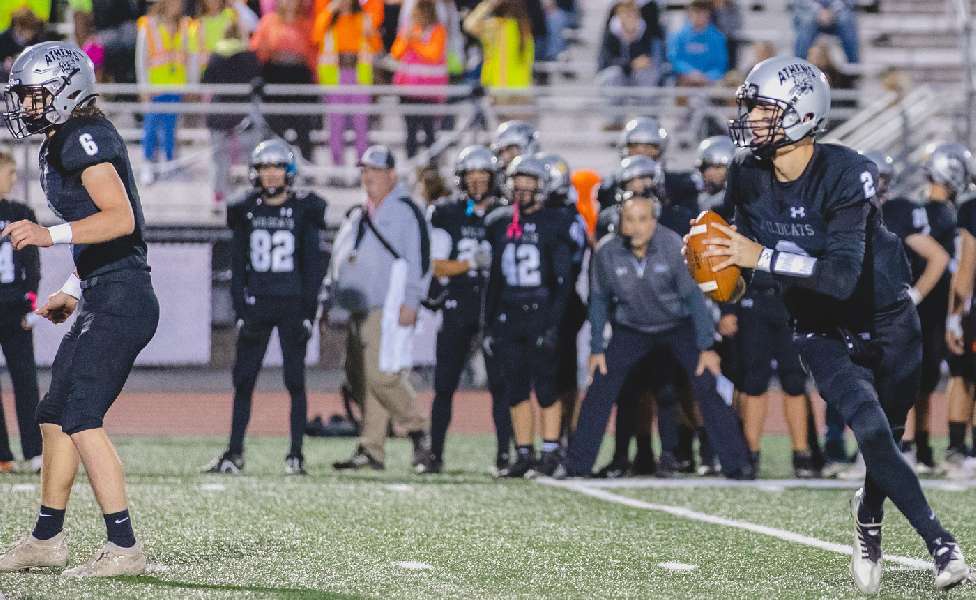 The Wildcats were penalized 11 times for 140 yards in the first half, and led 7-0 at the intermission.

“We shot ourselves in both feet,” said Athens coach Jack Young. “It’s really, really hard to play a game making those kinds of mistakes — it’s no different than turnovers.

“And, we turned the ball over once in the first half … continually shot ourselves in the feet.

“The first half was really, really ugly,” added Young.

On the flip side, the Wildcat defense, which held the Black Knights to just 127 yards in total offense in the game, covered up some of the first-half warts.

“Our defense was well-prepared … as a whole we played very, very well on defense,” said Young. “We didn’t give up any big plays, and we won the turnover battle.”

At the half, Young asked his team to cut down on the mistakes.

“The first half was crazy, but we struck together,” said Young. “At halftime, we didn’t really make any adjustments. We just talked about what we needed to eliminate.

“We cleaned up the penalties a little bit in the second half, and our offense got untracked,” he added.

The Wildcats were flagged six more times in the second half and the game with 17 penalties for 215 yards.

“The penalties the last three weeks have been way out of control, and that’s on me and my coaching staff,” said Young. “We have to get better with the penalties.”

The key plays in the second half were a 61-yard punt return for a score by senior Lucas Horton, and a blocked punt by senior Glenn Romberger, who also scooped it up and returned it 20 yards for a TD.

“We talked all week about special teams … we felt we needed to win the special teams battle, and we did,” said Young. “I can’t say we work extensively each week on all of our special teams, but this week we did.

“We spent a lot of time on our punt return and kick return games. We spent a little extra time this week, because we felt we weren’t getting the job done as well as we could,” he noted. “It paid off.

“I really felt we could pressure their punter, not even with the intent of blocking the punt, but a lot of times that pressure can result in a poor punt.

“We set up a return, and Luke (Horton) did a tremendous job getting to the wall,” added Young. “He’s a big guy, but when he gets to the corner he’s going to turn on the jets … and he may have that big body, but when puts the pedal to the medal, he’s moving.

The lone score of the first half was a 26-yard TD pass from senior QB Mason Lister to Horton in the first quarter. Lister’s PAT kick made it 7-0.

Senior tailback Caleb Nichols scored on a 4-yard TD run midway through the third quarter, and Lister’s PAT kick made it 14-0.

The Wildcat defense forced a Towanda punt on its next possession. Horton let it drop, and it rolled dead at the Athens 26. However, with a flag on the play against Towanda, Young chose to have the Knights punt again.

Horton scooped this one up on the bounce at the far hash, made his way to the home sidelines, turned the corner behind a wall of blockers, and raced 61 yards for a score on the final play of the third quarter to make it 20-0.

Towanda, which had nine penalties for 77 yards, was penalized on the ensuing kickoff, and started at their own 25. After a three-and-out, Romberger blocked Justin Schoonover’s punt, scooped it up and returned it 20 yards for a score. Lister’s PAT kick made it 27-0 with 9:21 remaining in the contest.

The Black Knights’ next possession resulted in a punt, and Romberger once again broke free and blocked it. He again scooped it up, but was hauled down at the Towanda 25.

Moments later, Lister connected with Horton on a 24-yard TD pass. Lister’s PAT kick made it 34-0.

“We talk about the three phases of the game — tackling, the turnover battle, and big plays,” said Young. “We feel if we can win those three areas, we’re going to be successful. In the end tonight, in the second half, we took care of business.”

Lister completed 14 of 24 passes for 221 yards and two TDs, while being picked off twice.

“We threw the ball to a lot of people tonight,” said Young. “That’s one thing we’ve tried to better at — spreading the wealth, so defenses can’t take away our one guy. I think we’re doing a pretty good job with that.”

Nichols led the Athens ground game with 112 yards and one TD on 13 carries, and Lister added 29 yards on six carries.

Grady Flynn completed 8 of 21 passes for 52 yards and one interception. Schoonover led Towanda with three catches for 29 yards.