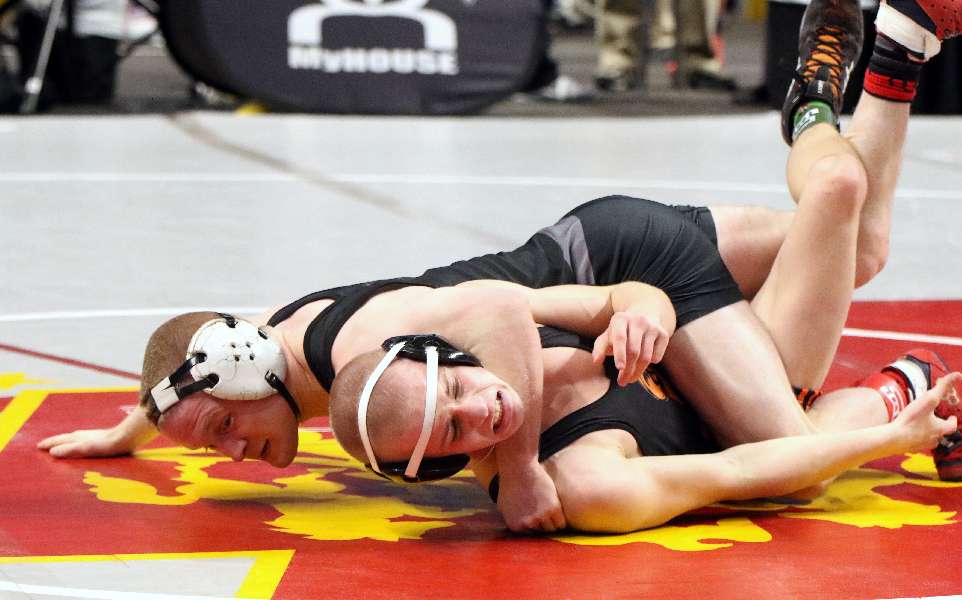 HERSHEY — Athens senior Gavin Bradley, a state runner-up last year, may not have wrestled his best, but he still advanced to the quarterfinals with a 16-5 major decision in the opening round of the PIAA Class AA Wrestling Championships here Thursday morning at The Giant Center.

“The kid knew what was coming, and he’s real funky,” added White. “We just wanted to stay away from him as much as possible, along the lines of getting ourselves in trouble.

Bradley, now 36-1 and the top seed in the 113-pound bracket, squared off with junior Mason McLendon of Susquenita, and scored the initial takedown about 30 seconds into the bout.

Bradley cut McLendon twice, and twice scored two takedowns to take a 6-2 lead at the end of the first period.

Bradley extended his lead to 10-4 with a pair of takedowns in the second period, and cut McLendon with 20 seconds remaining, but couldn’t manage another takedown.

McLendon spent the majority of the third period riding top, but never got close to turning Bradley, who was penalized a point for stalling to make it 10-5.

With 18 seconds remaining, McLendon was warned for stalling, and the match was re-started in the center.

Bradley scored a quick escape and takedown, then turned McLendon to his back for three near-fall points as the horn sounded.

“In the third period, (Gavin) just didn’t get out quickly and (McLendon) is good on rides,“ said White. “He rode double boots with one-on-one to both sides for just about the whole period. It’s hard to get out if you don’t do it quickly.”

Bradley will face Jack Kazalas (39-5) of Quakertown in the quarterfinals.