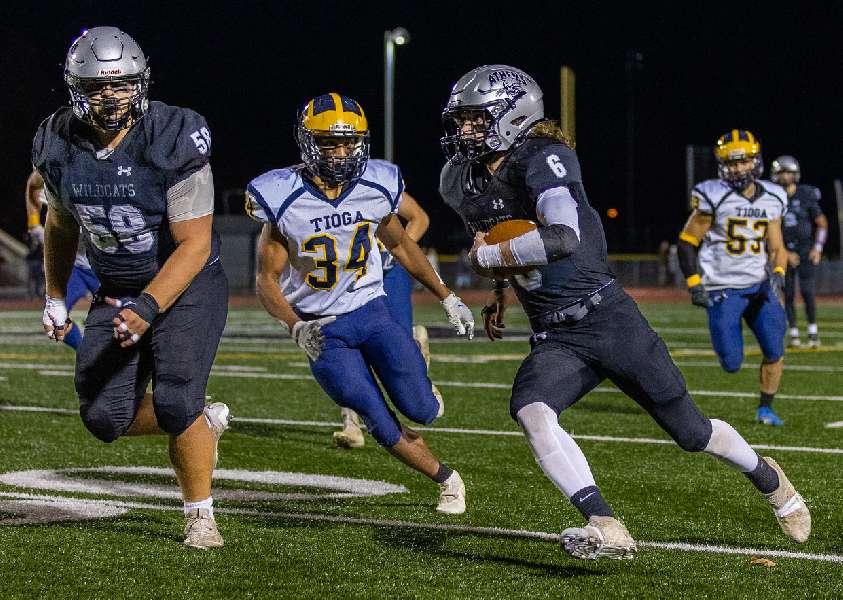 ATHENS — Tioga scored on its first three possession of the game en route to a 29-13 win over Athens here Friday night in non-league football action at Alumni Stadium.

The game marked the first meeting between the two schools separated by just 14 miles.

“We had a good week of practice,” said Tioga coach Nick Aiello. “Once we knew we were playing Athens, I think the kids locked in. I’m sure Athens was the same way.

“We’ve never played before, but I guess you’d call it a rivalry, or a ‘Border Brawl,’” noted Aiello. “The kids were definitely focused, and wanted to come in here and put a good game together.

“We treated this week like a playoff game,” he added. “In the end, it was a great week. I’m glad we could come down here, and I really appreciate Athens hosting us.”

In a normal year, Athens would have hosted Sayre in the “Rusty Rail” rivalry game, but Sayre folded its varsity program in mid-August.

“We didn’t want a week off, and the kids deserve to play,” said Athens coach Jack Young. “How fortunate was it for this game to happen?

“For 10 weeks, I’ve called multiple states, and all across Pennsylvania trying to get us a game, and was unsuccessful,” he noted. “We left here Monday thinking we were going to have Tuesday off, so it was exciting to have this game come together.

“It was a little stressful Tuesday and Wednesday trying to put game plans together,” added Young. “I just wish we could have been better tonight. I think this could have been a barn-burner. We just weren’t good enough to make it one.”

With both teams heading into the playoffs next week, neither coach wanted a week off.

“Playing this game is huge,” said Aiello. “I didn’t know until Monday at 7 p.m. (that Deposit-Hancock was canceling) … to be able to pick up this game it really set our focus.

“Going into the playoffs next week, I thought this was the exact game we needed,” he noted. “We needed to be focused, which we were. We needed to come out and do some really good things, which we did.

“It’s a great springboard into next week when we start playoffs, and you have to be 1-0 every week,” added Aiello.

“We definitely didn’t want a week off heading into the postseason,” said Young.

Tioga took the opening kickoff, and marched 69 yards (although they covered 74 yards after a penalty prior to the first snap) on nine plays in a drive that consumed nearly five minutes.

Junior QB Caden Bellis connected with junior tight end Karson Sindoni for an 11-yard completion on Tioga’s first play, then a pair of short runs gave the Tigers their initial first down of the game.

Bellis added runs of 11 and 8 yards on QB keepers as the Tigers moved into Athens territory.

The big play in the drive was a 34-yard pass from Bellis to junior Valentino Rossi that moved the ball to the Athens 2.

Junior Drew Macumber plowed into the end zone on the next play. Junior Gavin Fisher’s PAT kick made it 7-0 with 7:08 remaining in the first quarter.

Athens’ opening possession of the game ended in a three-and-out, and the Tigers took over at its 16 following a 46-yard punt by senior Lucas Horton.

On third and seven, Bellis hooked up with junior Evan Sickler for a 7-yard gain. Athens was also assessed a pair of unsportsmanlike conduct penalties that moved the ball to the Wildcat 46.

After another 7-yard pass to Sickler, Tioga went to the ground and picked up 25 yards on five carries to the Athens 14. Macumber chewed up 23 yards on four carries in that stretch.

After a 9-yard pass from Bellis to Duncanson, Macumber picked up 4 yards to the Wildcat 1 on the final play of the first quarter.

On the first play of the second quarter, Macumber bulled his way into the end zone to make it 13-0 with 11:56 remaining in the first half. After Athens jumped offsides on Tioga’s PAT attempt, the Tigers chose to go for two, and Macumber ran it in to make it 15-0.

The Tigers were penalized after their TD run, and the ensuing kickoff was from their 20. Horton fielded the kick at his 25, and returned it 28 yards to the Tioga 47.

Senior QB Mason Lister connected with sophomore wideout Xavier Watson for a 13-yard gain on the first play of the drive, and senior tailback Caleb Nichols followed with a 9-yard run.

On third-and-1, Tioga batted down a pass, but was flagged for unsportsmanlike conduct after the play to move the ball to the 13-yard line.

Nichols covered the final 13 yards on three carries, capping the eight-play drive with a 5-yard TD run with 9:33 remaining in the half. Lister’s PAT kick closed the gap to 15-7.

Rossi quickly erased any momentum the Wildcats had with a 58-yard return of the ensuing kickoff to the Athens 27.

Duncanson opened the drive with a 12-yard run, and three plays later, Bellis scored on a 4-yard run with 7:28 remaining in the half. Fisher’s PAT kick made it 22-7.

Athens went to its short passing game on its next possession, overcoming a sack of Lister by Tioga junior Trent Browne, thanks to a 4-for-4 effort by Lister, moving the ball to the Tioga 27.

The drive stalled there as Sindoni and Duncanson combined on a QB sack for a 10-yard loss to move the ball back to the 37.

After an incompletion and a penalty for a false start, Athens faced a third-and-25 at the Tioga 42. Sindoni and Duncanson once again got to Lister for a 1-yard loss.

Athens punted to end a possession that chewed up 7 minutes off the game clock, but came up empty.

The Wildcats, who won the pre-game coin toss and deferred, quickly drove the second-half kickoff from its 35 to the Tioga 13.

Lister was 4-for-4, completing back-to-back passes of 8 yards to senior Matt Machmer, a 12-yarder to junior Josh Martin, and a 21-yarder to Nichols.

After back-to-back incompletions, Nichols was stuffed for no game to force Athens into a fourth-and-10. Lister’s fourth-down pass was picked off in the back corner of the end zone by Rossi.

Tioga moved the ball to midfield, but gave Athens life with a fumble that Lister pounced on at the Tioga 49.

Two plays later, the Wildcats were in the end zone.

After a 33-yard scramble by Lister, he completed a quick slant to Martin for a 16-yard TD with 2:26 remaining in the third quarter. The PAT kick was blocked, and Tioga’s lead was 21-13.

On the first play following the ensuing kickoff, Martin stepped in front of a Bellis pass to give the Wildcats the ball at the Tioga 35.

On fourth-and-3 at the Tioga 28, Lister found Watson for a 5-yard gain to the 23 on the final play of the third quarter.

On the first play of the fourth quarter, Lister, after being flushed out of the pocket was hit by Duncanson and sophomore Brennan Sindoni. Attempting to get rid of the ball, Lister, as he was being driven to the ground, unleashed a pass that went backwards and resulted in a 16-yard loss.

Two plays later, Lister’s 19-yard pass to Martin for an apparent first down, was nullified by a holding call downfield, leaving Athens in a third-and-15 situation.

After a 9-yard pass to Horton, Lister was again flushed out of the pocket, but this time Duncanson finished off the sack for a 13-yard loss.

The Tigers needed just three plays — all on the ground — to cover 67 yards. After a 15-yard run by Macumber, Duncanson ripped off a 34-yard run up the middle. Macumber finished off the drive with a 16-yard TD run with 9:02 remaining. Fisher’s PAT kick made it 29-13.

The Wildcats put themselves in a hole on their next possession with a holding call on first down that resulted in a first-and-27. Three plays later, they punted. Athens was penalized eight times for 85 yards.

Tioga took over with 6:20 remaining, and with the aid of a pair of first downs was able to run nearly five minutes off the game clock.

Athens’ final possession ended on downs after four plays, and Tioga took a knee to run out the clock.

“The message all week was ‘we have to play Tioga football, come in here and do what we do,’” said Aiello.

“I told the guys, ‘you might not be the biggest team out there, or even the most talented, but you have to do the little things right, and you have to execute on offense, and play great defense.’

“I’m very proud of the boys,” added Aiello. “They had a very good week of practice, and it showed tonight.”

“I think we played out of character tonight,” said Young.

“When you play an opponent like (Tioga), you have to be better than we were,” he noted. “They are a well-greased machine, and it’s obvious why they’re successful.

“We shot ourselves in the foot, we went backward too many times offensively, and, especially in the first half, our physicality wasn’t there at the line-of-scrimmage on either side of the ball.

“All year long the penalties have killed us … every time we got ahead of the sticks, it seems there was a penalty or a sack, and we were back behind them.

“We did some things that were positive and productive, but against a team like that we have to be much better than we were,” added Young. “Again, hats off to them. They did the little things that had to be done.”

Tioga had 295 yards in total offense, while Athens totaled 193, including just 31 on the ground.

Bellis completed 5 of 9 passes for 68 yards, and was intercepted once. Rossi led Tioga with two catches for 41 yards.

Lister completed 21 of 32 passes for 162 yards, one TD, and one interception.

Machmer led Athens with seven receptions for 41 yards, and one TD, while Horton had five catches for 38 yards, Watson added four grabs for 35 yards, and Martin had three catches for 47 yards.

Nichols led Athens with 42 yards and one TD on 11 carries.

Unofficially, Athens, now 6-4, will host Montoursville (4-6) Saturday, at a time to be announced, in the semifinals of the District 4, Class 3A playoffs.