LEAGUE TITLE 32 YEARS IN THE MAKING FOR ATHENS GIRLS 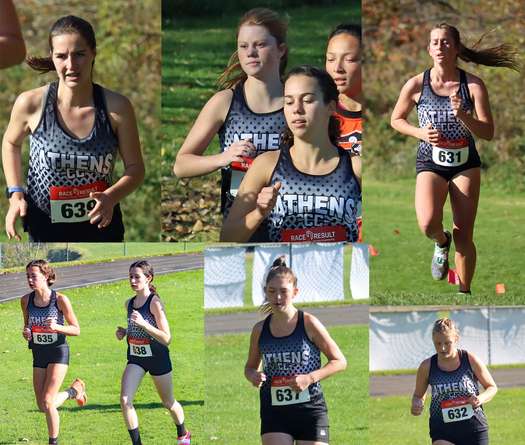 ATHENS — This season was 32 years in the making for Athens girls cross-country.

That’s the last time the Lady ‘Cats won a league title  — 1990 — and after knocking on the door a season ago, they were able to break through this season.

“It was really exciting,” said senior Emma Bronson. “Up until this year, progressively each year, our team overall has been getting better and better; and this year, it all came together.”

Emma, Sara Bronson, and Thea Bentley have been amongst the league’s best — they’re all NTL All-stars this year, too, but it was their fourth and fifth runners that made this possible.

“All of our teammates ran well,” said Sara Bronson. “Thea Bentley, Olivia Cheresnowsky, Janae (Harkins), Abby (Prickitt), and Emily (Henderson) all ran super well. It’s not often that you win a title. It feels good because we’ve all been putting in the miles.”

Their biggest competition in the Large School Division has been Troy, and they finally got them in week two.

“Going into the season, we knew that Troy would be our toughest competition,” said Emma. “Being able to beat them right from the start made the rest a little bit easier — not that it was easy, but I’m just really proud of all the girls. Every week, they were working really hard because we all wanted that title for each other.”

It also helped that they got Troy at their home course on Round Top.

“The last couple of years we’ve always run at Troy, but this year, to be able to finally beat them at our home course, it’s just awesome,” remarked Emma.

This is also the last season the two sisters will be running together, something they’ve done four of the last six years — counting junior high and varsity.

“She is so much fun to run with, and so fun to train with,” Sara said. “I think it’s a little sad. She’ll be good, whatever she does in the next four years.”

For the senior Emma, it’s been a run she won’t ever forget.

“This year, we’ve just had a really fun team,” she said. “It was really special to have my last season with them.”