TROY GRINDS OUT 32-7 WIN OVER ATHENS 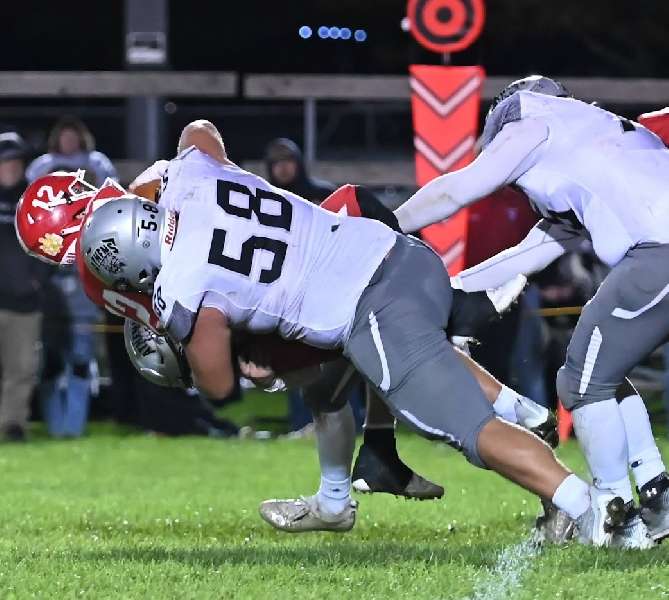 “You take your lumps, and you take the whooping that you got,” said Athens coach Jack Young. “You know, we had our opportunities, we didn’t take advantage of them. The kids fought well — it was a physical football game. This was probably the most physical football game we played. And our guys flew around, and we made some plays, but we just weren’t good enough.”

Athens’ first two possessions started inside Troy territory, but they came away empty-handed both times. The breaks also went against them, as in the second quarter twice they nearly had miraculous catches that would have resulted in scores fall to the ground.

But, defensively, they just had no answer for Troy’s run game, as the Trojans powered their way to 355 yards on the ground off 53 carries, choosing to throw it just twice.

“We’re going to learn from it, and we’re going to move on,” said Young. “You know, hats off to Troy, they’re a well-coached team, they’re playing with a ton of confidence, and sometimes that’s tough to beat, and tonight we weren’t good enough.”

Quarterback Mason Lister was 11-for-22 for 98 yards with one pick, while his top target was Josh Martin, who had four catches for 51 yards. Luke Horton also had 31 yards receiving on three catches.

It was a relatively balanced day for the Wildcats, as they ran the ball 23 times versus 22 passes, though some of those runs were Lister trying to escape the Trojan pressure.

“We felt like we had an advantage there,” Young said about the pass. “But, again, we didn’t execute. If we didn’t get the ball out of our hands, we failed with pass protection. We had a couple of big drops in the first half, and that hurts. We haven’t had drops in a few weeks, and those guys are great guys, so they’re going to correct themselves, and they’re going to make big plays moving forward.”

On the ground, Athens was led by Caleb Nichols, and his 54 yards on 11 carries, including a touchdown.

Troy’s Clayton Smith had himself a night, with 222 yards rushing and four touchdowns on 22 carries.

“That’s what they do,” Young said about Troy. “And that’s all they do. And they stick to it. I don’t know if they threw the ball three times. And we knew it, we knew what we were getting, but, you know, we’ve got to be better.”

The Wildcats took the opening kick-off, and, thanks to a blindside hit by the Trojans, started the drive at the Troy 44-yard line. After another Troy penalty they were down to the 30.

From there the drive fizzled, though, as even though Lister completed three straight passes, Troy’s tacklers kept Athens’ receivers from getting away, and the Wildcats turned it over on downs.

However, Athens made something happen on Troy’s ensuing drive, as they recovered a fumble on the first play, taking over at the Trojan’s 30-yard line.

Three plays later, it was Troy getting the takeaway, as Smith caught a tipped pass for the pick.

That’s when Troy did what they do best, and went on a 12-play, 75-yard scoring drive that ended with a Smith 5-yard touchdown run. Smith ran the ball six times for 35-yards on the possession, including a big 7-yard gainer on third-and-7 to keep the drive alive.

Athens blocked the extra point, but it was 6-0 Trojans with 2:03 left in the first quarter.

The Wildcat offense showed signs of life on their next drive, as Lister round Martin for a 20-yard gain on the first play from scrimmage. That was followed by a Nichols 13-yard run, getting them down tot he Trojan 34-yard line.

That’s where it stalled, though, as a sack on third-and-2 ultimately forced a Wildcat punt.

Troy took over at their own 18-yard line, and Smith got things started with a 46-yard run off an option pitch from Evan Woodward down inside Athens territory.

From there, they continued to chip away, as they used five more plays to get inside the 10. Athens’ defense would stiffen up, ultimately forcing a 4th-and-1 on the Trojans, but Kael Millard picked it up with a 2-yard gain.

The Wildcats found some more success on their ensuing drive, with a 21-yard pass play of Lister to Martin getting them down to the Trojan 6-yard line.

However, on the ensuing play Lister was called for intentional grounding, backing Athens up to the 20-yard line for second-and-goal.

They would get to the 16 for 4th-and-goal, with Lister’s pass over the middle tipped to Horton. Horton nearly hauled it in for the touchdown, but it dropped to the ground, giving Troy the ball.

The Wildcats would force another Troy turnover, this time on a Kolsen Keathley interception.

Their ensuing drive went nowhere, though, even as a Lister pass to Xavier Watson went through his hands after it was tipped by Troy.

The Trojans got the second half kick-off, and on the first play from scrimmage Smith went 60-yards untouched off an inside hand-off to pay dirt. The 2-point conversion was no good, but the Trojans led 18-0 with 11:46 on the clock.

Athens’ first drive in the second half ended up in a punt attempt, but the ball went through Horton’s hands. He tried to run it, but was tackled for a 12-yard loss, giving Troy the ball on the Wildcat 31-yard line.

It took them five plays to get into the end zone, the key play being a 19-yard from Mason Smith. It was Clayton who got the touchdown, though, on an 8-yard run. Justice Chimics added the point after, making it 25-0 with 7:14 on the clock.

The Wildcats got to midfield on the following drive, but a holding call, followed by a sack from Clayton Smith, ultimately forced them to punt.

That set up Troy’s final scoring drive, as they went 77 yards on 11 plays, ending with a 7-yard Clayton Smith run. A 17-yard run from Clayton Smith on 2nd-and-long, followed by a 12-yard Evan Woodward run on third-and-7 four plays later keyed the drive.

Thats when Athens made something of this nightmare, going on a 10-play, 65-yard scoring drive themselves. A 12-yard Lister run on third-and-4 kept the sticks moving, followed four players later by a Nichols three-yard carry on fourth down to keep the drive alive.

Three plays after that, Nichols took a late counter hand-off 21-yards to the house for Athens’ touchdown. Lister added the point after, and it was 32-7 with 6:17 left to play.

The Wildcats never saw the ball again, though, as Troy ran out the final six minutes and change with a 10-play drive, converting two fourth downs to finish with the ball.

Despite the setback, Young feels his team is better than they showed at Alparon Park.

“I don’t think tonight’s an indicator of what kind of football team we are,” he said. “It was a chaotic week, and, you know, at times, our preparation didn’t look like it was on target. At times we were in the wrong places, and this like that, but, you know, a lot that’s on coaching. We’ll take that, and we’ll get better from it.”

The Wildcats, now 3-2, will host divisional rival Towanda next Friday for homecoming.