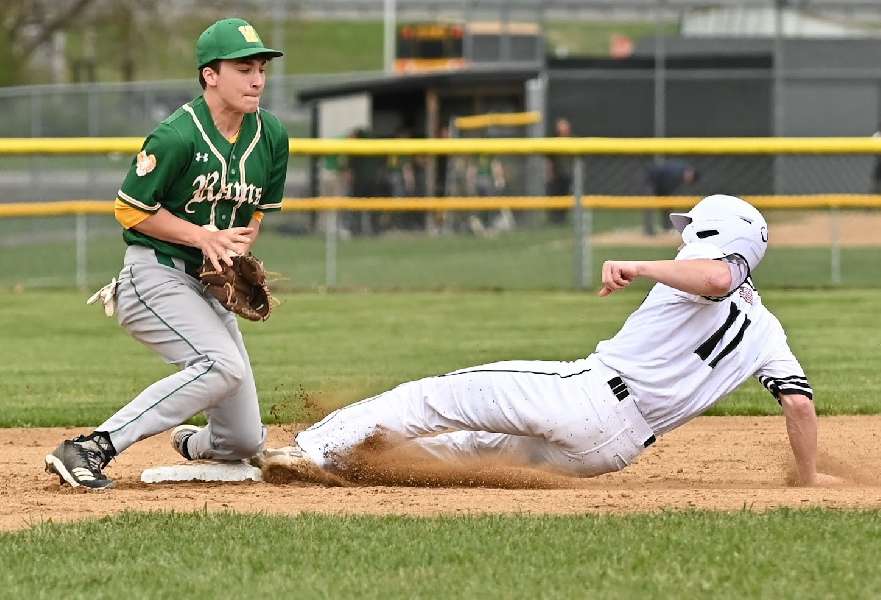 ATHENS — Unbeaten Wyalusing scored an unearned run on two Athens errors on the same play in the top of the third inning to take the lead for good on its way to a 7-4 win over Athens here Monday afternoon in NTL Large School Division baseball action.

With two outs in the top of the third inning, and the game tied 2-2, Trehnon Hugo hit a flyball that was misplayed. An errant relay throw to third bases allowed Hugo to score to give the Rams a 3-2 lead.

Wyalusing added another run in the fourth, and three more in the top of the seventh to take a 7-2 lead.

The Wildcats scored two runs in the home half of the seventh, on an RBI double by junior Mason Lister and a passed ball.

The Wildcats took the early lead with one run in the bottom of the first inning.

Rude led off with a single, and stole second. Sullivan then stroked a single to right field, and Rude scored when the ball was misplayed.

Wyalusing answered with two runs in the top of the second on a sacrifice fly by Hugo and a bases-loaded walk to Morningstar.

Athens tied the game in the bottom of the second. Setzer led off with a double and ended up on third when the ball was misplayed in the outfield. He scored on a sacrifice fly off the bat of Merritt.