MIDDLEBURG, Pa. — Midd-West scored twice in the first 4 1/2 minutes of the game, and cruised to a 7-0 win over Athens here Wednesday night in non-league boys soccer action.

“We were sloppy and made mistakes all over the field,” he said. “Simply put, it’s not good enough from us.”

About 10 minutes into the game, Nolan Stahl scored to make it 3-0. Owen Solomon, who assisted on Loss’s first goal, was credited with his second assist.

Nick Eppley, who assisted on Loss’s second goal, scored an unassisted goal with 20:26 remaining in the first half.

Eppley scored two more goals in the second half to complete his hat trick, and Evan Leitzel finished off the scoring in the 55th minute.

Conner Mosher had 10 saves in net for the Wildcats. 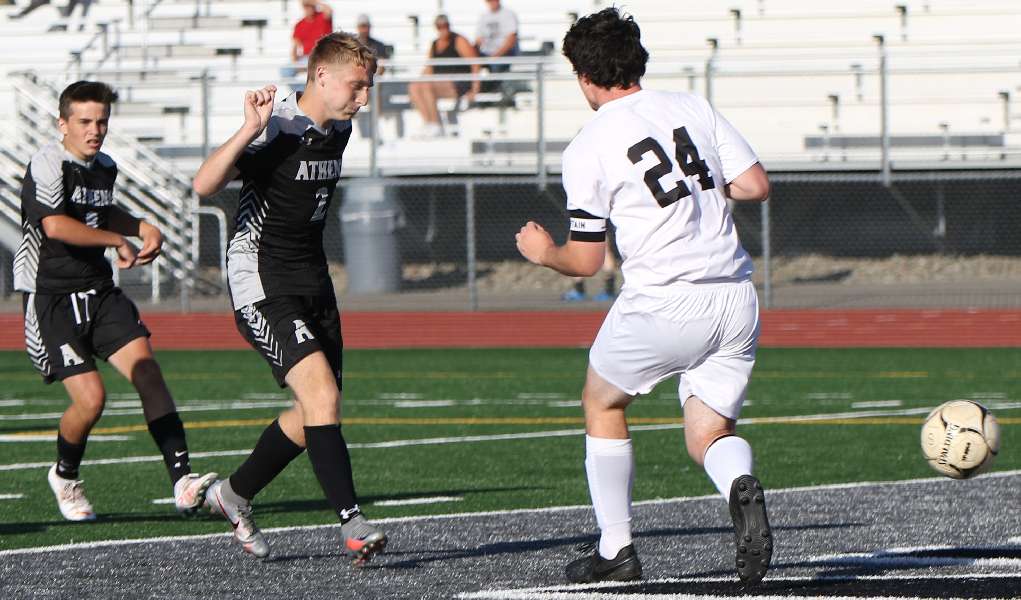 MONTOURSVILLE — Athens rallied for a 3-2 win over Montoursville in its season-opener, but couldn’t quite duplicate the feat later in day in a 4-2 loss to Danville in the championship game of the Montoursville Tournament here Saturday in boys soccer action.

Semifinals
Athens 3, Montoursville 2
Athens scored three second-half goals to rally for a 3-2 win over Montoursville in the opening game of the tournament.

Dino Pulizzi scored in the 21st minute, and again in the 35th minutes to give the Warriors a 2-0 lead at the half.

Junior Brayden Post put Athens on the board five minutes into the second half to trim the deficit to 2-1.

Sophomore Korey Miller scored his first varsity goal, off an assist from senior Mason Hughey, with 5:53 remaining to tie the match at 2-2.

“We changed up our line-up at half, and came back to get the win,” said Lezak.

Athens had a 7-6 edge in shots-on-goal. Both teams had three corner kicks.

Championship Game
Danville 4, Athens 2
Athens again rallied from a two-goal deficit to tie the game, but Danville scored two more goals late in the game for a 4-2 win in the championship game.

The Ironmen scored midway through the first half, and again with 9:50 remaining to take a 2-0 lead.

Senior Daniel Horton put the Wildcats on the board with an unassisted goal with 6:22 left in the first half.

With just 44 seconds remaining before the intermission, Quinn, off an assist from junior Tucker Brown, found the back of the net to tie the game at 2-2.

Danville scored with 13 1/2 minutes left in the contest, and again 10 minutes later to ice the win.

Danville had an 8-6 edge in shots-on-goal, and a 7-0 advantage in corner kicks.

“We have a tough week ahead of us, so we need to get some rest and get back to training Monday,” noted Lezak