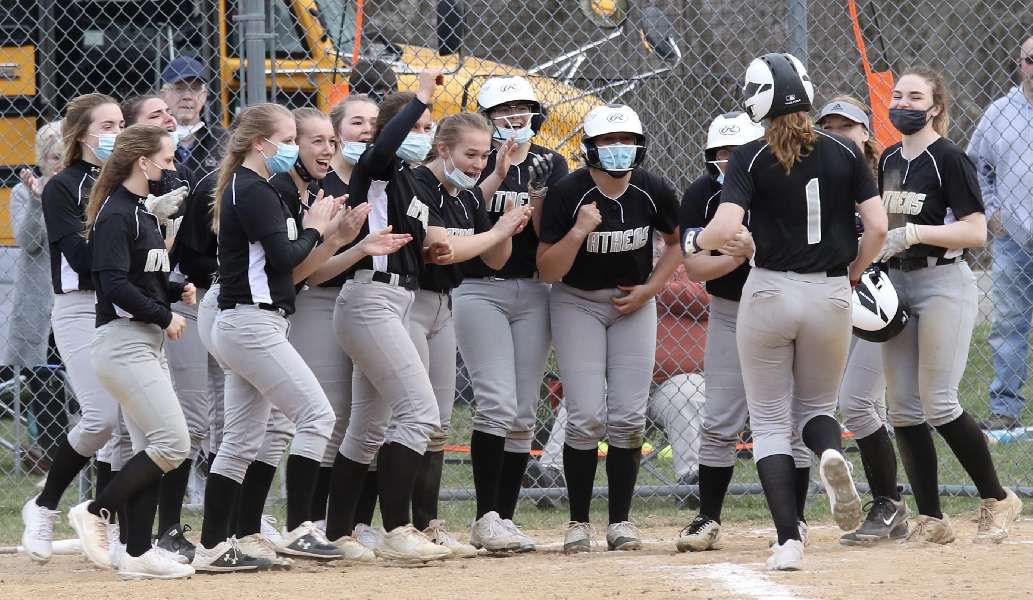 “It was a crazy back-and-forth game,” said Athens coach Mickey Farrell. “It was exciting.

“Twice, the bottom of our line-up — Mallory Mummert, Ashlyn VanFleet, and Macie Coyle — turned it over to the top of our line-up, and our top four hitters did what they were suppose to do,” noted Farrell.

“I told (the bottom of the order) this win was as much them, as it was the top of our order,” added Farrell, noting the top four hitters combined for 12 hits, nine runs scored, and 12 RBI.

With two outs in the top of the eighth inning, a hustling Coyle beat out a grounder to shortstop that was mishandled. Senior Harley Sullivan singled to advance Coyle to third base, and Hatch plated her with a single.

In the bottom of the inning, junior Caydence Macik, in her second inning of relief, struck out the first batter, but then gave up singles to the eight and nine hitters — Autumn Outman and Keyana Thomas.

CV lead-off hitter Katie Adams then ripped a line drive toward right field, but a leaping Repsher at first base, snared the liner and tagged the runner coming back to the bag for the game-ending double play.

“That was a really nice, heads-up play by Addy,” said Farrell. “It was a great play.”

Athens took a quick 5-0 lead in the top of the first inning in a rally that featured an RBI single by Macik and a two-run home run by Repsher.

Cowanesque Valley, however, answered with five runs in the home half of the first. Makayla Vargeson provided the key hit with a three-run home run — the first of two long balls in the contest.

The Lady Indians scored two runs in the second and another in the third to take an 8-5 lead.

“They shut us down until the sixth inning … keeping it close was the key,, though” said Farrell. “I feel if we keep it close, we can come back on anybody.”

Athens scored twice in the top of the sixth on a sacrifice fly by Macik and an RBI single by Repsher, but Vargeson’s two-run homer in the home half of the inning pushed the lead back to 10-7.

Mummert led off the top of the seventh inning with a single, and VanFleet and Coyle worked walks, sandwiched around an out, to load the bases for the top of the line-up.

Sullivan ripped a two-run double to trim the deficit to 10-9, and Hatch tied the game with an RBI single. Macik then drove a 3-1 pitch over the fence to give the Lady Wildcats a 13-10 lead.

The bottom of the CV line-up answered as Thomas belted a two-run triple to trim the lead to 13-12, and Adams delivered an RBI single to tie the game.

Repsher homered and singled, scored once, and drove in three runs in the win, while sophomore Aliyah Butler singled twice, Mummert singled and scored one run, Coyle doubled and scored two runs, and Ali Thoman crossed the plate once.

Macik earned the win for Athens, pitching two innings of shutout ball. She allowed three hits, and struck out two.

“Caydence did an awesome job,” said Farrell. “She wasn’t warmed up at all, and came in and threw strikes.

“She earned the start tomorrow against Towanda — it’s a big game for us,” Farrell added.

While Athens is off to a 4-0 start, Farrell said his team is not clicking on all cylinders.

“We can score with anyone,” he said. “Defensively, however, we’re not playing with enough urgency. I think at times we’re unsure what to do with the ball, and I think a lot of that comes from the fact we’ve had two practices outside.

“We’re where we need to be hitting-wise, but we still have a long ways to go defensively.”

Farrell also had words of praise for Cowanesque Valley.

“(CV coach Mike Vargeson) does a nice job,” said Farrell. “That teams is one of the best two-strike approach teams I’ve ever seen. They put the ball in play almost every time we had them 0-2, or 1-2.

“There’s no doubt in my mind, (CV) will win the NTL Small School Division. They just have too much hitting.

“And, (Makayla) Vargeson is going to be in the hunt for league MVP,” added Farrell. “She is really good.”

Athens returns to action Tuesday when it hosts Towanda.