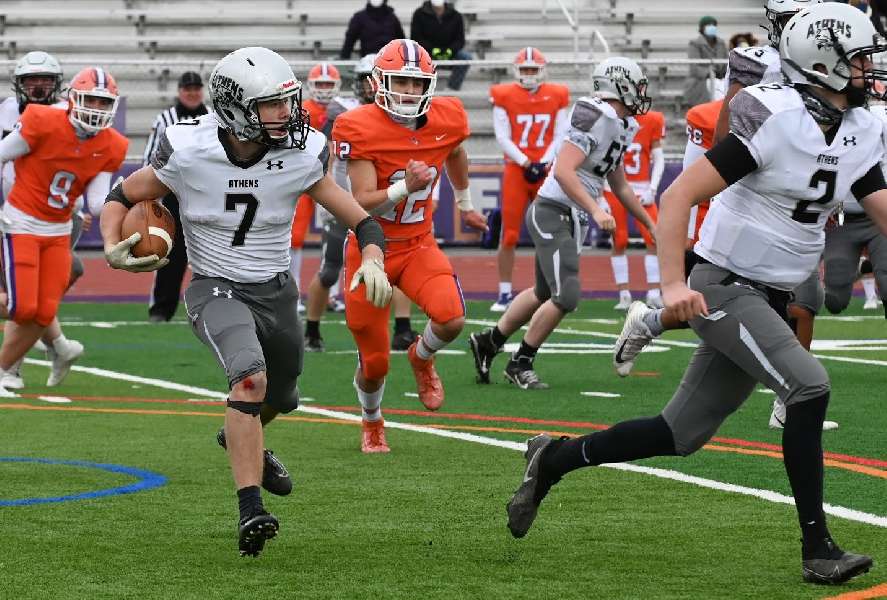 DANVILLE — K.J. Riley threw a 61-yard TD pass on the first play from scrimmage, and added four more first-half TD throws to lead Danville to a 37-0 lead at the intermission en route to a 43-0 win over Athens here Saturday afternoon in the semifinals of the District 4, Class AAA playoffs.

“We really didn’t have any answers. We wanted to come in and mix up some coverages but we had two breakdowns in coverage on their first two touchdowns, ” said Athens coach Jack Young. “When that happens it puts you on your heels and gives you a little doubt in your mind, takes away your confidence and it’s all uphill from there.

“We knew it was important for us to start well and first play of the game giving up a touchdown on a coverage breakdown, it put us in a bad place and it was a tough day,” added Yount.

Riley completed 12 of 19 passes for 219 yards — all in the first half, with Carson Persing hauling in four for 192 yards and two TDs, and Jagger Dressler adding five catches for 79 yards and one TD.

“It was nothing that we didn’t see on film. They did the same thing to their previous opponents that they did to us today and when you don’t put pressure on the quarterback and contain him, it’s a struggle,” said Young. “That’s a really good football team and it’s a different time of the year when you get to the playoffs.”

Riley’s first TD was a 61-yard strike to a wide-open Carson Persing on a crossing route just 19 seconds into the game. Athens blocked the PAT kick, but still trailed 6-0.

Athens’ first play from scrimmage had the exact opposite result as sophomore QB Mason Lister was stripped of the ball while rolling out to pass, and the Ironmen recovered at the Wildcat 16.

The Athens defense held, and Riley split the up rights with a 31-yard field to give Danville a 9-0 lead just 77 seconds into the game.

Four of the next five Wildcat possessions ended with a punt, and the other with an interception.

Riley threw two more TD passes in the second quarter — a 20-yarder to Carson Persing with 5 minutes remaining, and a 5-yarder to Dressler with 3:49 remaining — to make it 23-0.

Riley added a 5-yard TD pass to Hayden Winn with 10:30 remaining in the first half, and an 8-yard TD to Ian Persing just 62 seconds later to give the Ironmen a 37-0 lead.

With the clock running in the second half due to the so-called “mercy rule,” Athens ran 26 offensive plays to Danville’s eight.

Lister completed 7 of 15 passes for 33 yards, with one interception. Junior Karter Rude led the Wildcats with four receptions for 32 yards.

Athens ends the season at 5-2, and will not be looking to play another game.

“We weren’t supposed to be here,” said Young. “A lot of people didn’t think we’d even play a season this year, never mind playoffs, so for our kids to get better each week and finish 5-1 and come play a really good football team, it was a special time for us.

“We didn’t want it to end like it did today, but I’m super proud of these kids for working hard and we only have seven seniors, so the future is bright for us,” added Young.