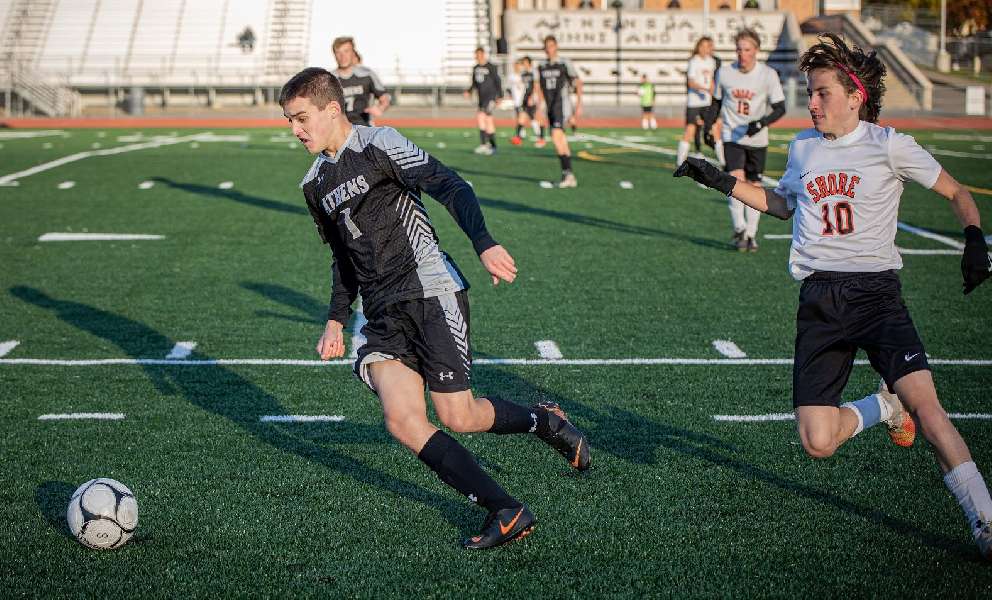 It's the first time in five seasons the Wildcats will not play in the Class AAA championship game.

Bulldog sophomore Peyton Welshans notched the only goal of the game, working a shot into the back of the net with 28:28 remaining in the second half.

A brief defensive breakdown set up Welshans' shot as he would collect the ball behind the defense and when Wildcat goalkeeper Asher Ellis came out of goal to challenge, Welshans was able to find some space.

"I think throughout the season most of the goals that we had go in against us probably were an overwhelming majority of our own small mistakes, a bobble here or a PK is called there," Athens coach Jake Lezak said. "I think one PK during the season was an actual PK."

Jersey Shore had an opportunity to increase its advantage on a penalty kick with 13:11 remaining in the contest, but junior Connor Cornelius couldn't convert t attempt. The Bulldogs were moving the ball in close, but their player was taken down inside the box when Ellis came out of goal to challenge the shot. The ball would head toward the open net, but Athens' Landon Lantz would make an impressive save.
Still, that one goal would hold up despite the home team's attempts to knot things up.

The Wildcats moved the ball inside the 18 less than four minutes later, but were unable to convert, then Tyler Chambers launched a long pass in front of the JS goal about 1 1/2 minutes after that, but Athens again came away empty.

It was the Wildcats who came up with the first threat of the second half when Chambers took a pass and pushed the ball in close, but was denied a shot at a score by the Bulldog senior Eli Reibson.

Nate Quinn followed less than two minutes later with a shot, but senior goalkeeper Logan Bailey made the save. Daniel Horton tried to find a route to the goal with about 12 minutes to go, but was turned away by Ezra Miller.

The Wildcats didn't give up in the waning moments of play as Quinn and Lantz both threatened in the final three minutes.

Athens controlled possession at the game's onset, but Jersey Shore would sway the momentum in its favor about three minutes into the first half. Still, the Bulldogs were unable to take advantage of potential scoring opportunities in which they took the ball inside the 18 three times in a six-minute span.

"I think our defense played a really good game," Lezak said. "We got unorganized in the first half and we made some adjustments in the second half."

Just past the midway point of the first half, Jersey Shore missed out on another chance when a throw-in sailed over the intended recipient's head and one-hopped into the arms of Ellis.

Ellis was solid in goal the entire half and the Wildcat defense helped the senior keeper maintain a 0-0 halftime deadlock.

Meanwhile, Athens took three shots in the first half and Bailey collected his first save of the game on a low shot by James Benninger-Jones midway through the 19th minute.

"It was tough for us offensively," Lezak said. "We've been working on it all week, all season long. We didn't have what we've had in years past, where we've had guys who were just scoring threats to every team. We had guys that could put the ball in the back of the net, but it was really tough for us, really tough for us all season to put the ball in the net, and at this level you're not going to get many chances and we didn't today. That's the way it is."

Athens finishes the season with an 11-3 record and the praise of its coach.

"I think the guys had a great season," Lezak said. "You look at the adversity they had to deal with all season and you look at all the things that were changing. We lost a great center middie in Benny Gambrell early on for the year and we adjusted, and definitely, the guys made some plays.

"They did everything we asked them to. They truly defined what a team was in every aspect of the game. There were no egos on the team.
"If you would have said, 'well who is your best player and who's all this,' the guys would kind of look around and go 'he's really good and he's really good,'" noted Lezak.
"They would all kind of just pass that around and I think that's really important for the younger guys to know that, to see that, that these guys just really kind of exemplified what it is," added Lezak.
Athens finishes the season at 11-3.
FOR MORE PHOTOS, visit Valley Sports Report.