ATHENS PUTS TOGETHER COMPLETE GAME IN 21-14 WIN OVER WYALUSING 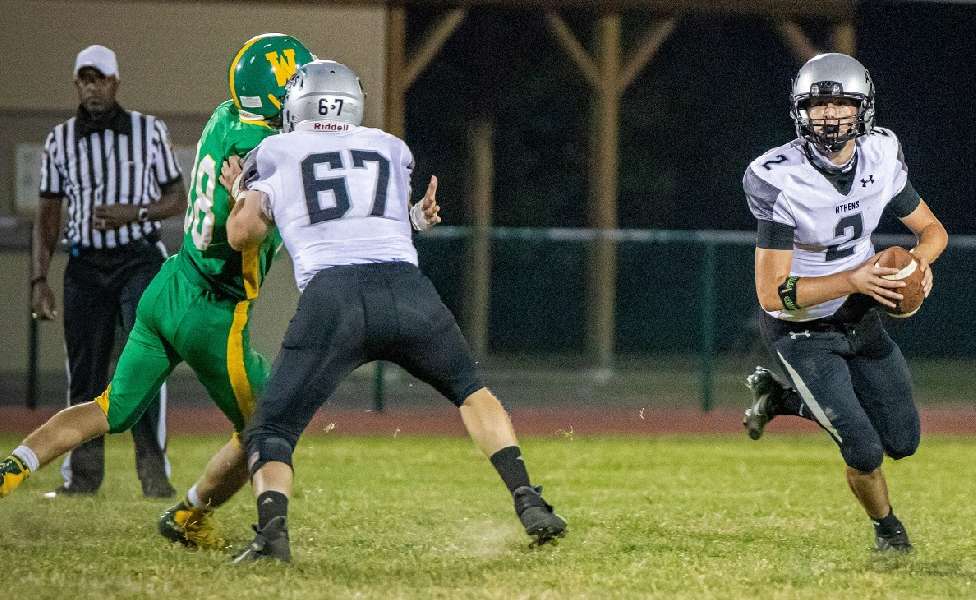 WYALUSING — This was the game Athens coach Jack Young was waiting for, and his team’s 21-14 victory over Wyalusing Friday night was worth the wait.

It was a complete Wildcat effort as they dominated the line-of-scrimmage, put together long drives and held a Wyalusing offense to half the yardage it put up in its win last week against CV.

“It’s huge, absolutely huge,” Athens quarterback Mason Lister said about getting the win. “A great game that came down to the wire — it was a little closer than I wanted it to be, but we made it work.”

The big improvement for Athens came up front as Athens won the battle in the trenches.
“Those guys played really well on both sides of the ball,” said Young. “Our line was much improved tonight because they feel like they didn’t play a real good game against Sayre.”

Young mentioned his seniors — Lucas Aquilio, Connor Sindoni, Ian Wright, Zac Gowin and Ben Pernaselli — as the key to their play this week. They outgained the Rams 165-121 on the ground and, at one point in the second half, held the ball for more than 10 minutes.

“We told them coming in ‘you guys are the key,’” Young said. “As many athletes as we are getting involved in the game on both sides, the key is still the line-of-scrimmage.”

In the first half, it was Lister picking apart the Wyalusing defense to the tune of 149 yards on 11 of 17 passing.
“Every player is great,” remarked Lister. “We make plays, we find the holes, and our line held up great today.”

In the second half, the Wildcats iced the game with 111 rushing yards.

“We ran the ball fundamentally much better, and our passing game was right on target with what we were trying to do,” said Young.

Lister finished with 184 yards on 15-for-25 passing with an interception, while Caleb Nichols had 75 yards on eight carries to go with his touchdown run. Shayne Reid carried the ball 12 times for 69 yards ,and Lister had eight carries for 12 yards and two touchdowns.

Wyalusing’s two big playmakers — Mitchell Burke and Kashawn Cameron — had times where they shined, but their offense as a whole was kept in check.

Burke was 13-for-28 for 184 yards and an interception, while running for 70 yards and a touchdown on 12 carries. Kashawn Cameron had seven catches for 89 yards and a score, Nolan Oswald had four catches for 42 yards.
Alex Mosier added 30 yards on the ground off nine carries.
The Wildcats had a 15-12 edge in first downs, but was also flagged seven times for 55 yards. Wyalusing was penalized three times for 25 yards, all in the first half.

The game started with a bang as Lister hit Rude for a 49-yard catch on the first play from scrimmage. Lister then punched it in from 2 yards for the go-ahead score. Reid’s kick was good and Athens led 7-0 with 11:13 left on the clock.
The Rams answered right back with a 77-yard, 5-play drive. On the second play from scrimmage, Burke hit Cameron for a 14-yard gain, followed by Mosier pumping out 8 yards on the ground.
After the teams traded 15-yard penalties, a 2-yard Mosier run gave Wyalusing a new set of downs.
On the next play, Burke ran right, found a seam and took it 51 yards to the house for the score.
Alex Hunsinger’s kick was good and the game was tied up 7-7 with 8:34 left on the clock.

Wyalusing was hit with a bit of bad luck as Isiah Way was injured on the point-after and never returned to the game.

After that, the defenses settled in.

The Wildcats drove it down to the Wyalusing 6-yard line on their ensuing drive. Lister found Rude and Reid for back-to-back 15 yard gains to get into Wyalusing territory.

After getting down to the 22-yard line on back-to-back completions, Lister was nearly sacked, but instead lateraled the ball to his offensive lineman Lucas Aquilio.

The ball rolled around on the ground and, for a time, the officials said Wyalusing ball. However, after convening, they gave it back to Athens, who used a 14-yard run by Reid on the next play to get inside the 15-yard line.

A 4-yard run on 4th-and-1 by Lister made it first-and-goal, but the Wyalusing defense held. Athens tried a field goal, but it was wide right.
The two teams then traded punts, with the Rams setting up shop on their own 32-yard line.
It looked like they were going to be stopped again, but Burke hit Liam Franklin for a 7-yard gain on 3rd-and-5 for a new set of downs.
Two plays later, he hit Cameron for a 13-yard gain to get to midfield. An 8-yard run by Mosier two plays later put the Rams in Athens territory with a fresh set of downs.
On 3rd-and-2, Arnold had a 6-yard carry to get inside the Wildcat 30-yard line.
That’s where things got bogged down as Athens forced a fourth-and-long. Wyalusing went for it, but the Wildcat defense sacked Burke for a turnover on downs.
Using that momentum, Athens went right to work, this time giving Nichols some carries. He had two carries for a total of 12 yards in two of their first three plays to get a new set of downs.
Then, on 3rd-and-8, Lister hit Reid for a 24-yard gain to the Wyalusing 35-yard line. The Rams would force a 3rd-and-9, but the Wildcats went to a middle screen to Tanner Dildane, who rumbled up field for 12 yards and new set of downs.

Two plays later Lister hit Babcock for an 8-yard gain to set up a third down run from Nichols. That got them 1st-and-goal at the 5-yard line, but time was ticking down with under 30 seconds to play and Athens had no timeouts left.
A 4-yard run from Reid got them to the goal line, and Lister spiked the ball to stop the clock with 10 seconds to play. On the next play — 3rd-and-goal — he punched it to give Athens the lead again.
Reid hit the point-after and the Wildcats led 14-7 with seven seconds left in the half.

They would carry that advantage to the second half where the defenses once again reigned. Three straight drives ended in 3-and-outs to start the third.
On the second Wildcat possession of the second half, they would go 62 yards on seven plays, ending with a 39-yard run by Nichols.
The Wildcat line opened up a big hole on the left side, Nichols broke a couple tackles and that was it. Reid’s point-after was good and the Wildcats went up 21-7 with 5:30 left in the third quarter.

Wyalusing’s offensive struggles continued in the ensuing drive, their lone bright spot a 20-yard scamper from Burke to get down to the Wildcat 29-yard line.
However, they went backward on the next play. A 9-yard sweep by Cameron made it a manageable 4th-and-6, but once again Burke was caught in the backfield and brought down for the turnover on downs.
Athens’s next drive would end in a punt, followed by Burke getting picked off by Jaden Wright to end their ensuing drive.

Late in the third quarter, Athens took over at its own 29-yard line and would go on a 16-play drive in which they held the ball until under five minutes to play in the game.
They had two fourth-down conversions — a fake punt at Wyalusing’s 48-yard line by Nichols and a Lister to Babcock 4-yard hook up — put them in good position to score, if not run out the clock.
They got all the way down to the Ram 17-yard line when, on first down, Lister threw it up to Babcock near the end zone. The ball was tipped and intercepted by Franklin, who returned it to the 21-yard line.

While Athens didn’t score, the drive brought the game clock down to 4:42 left to play and the Rams needing two scores and to PATs to send it into overtime.

Things didn’t look good to start as Burke had back-to-back incompletions, but then he hit Oswald for a 22-yard gain.

Three plays later, on third down, Burke found Cameron for a 21-yard gain and the drive continued.

Three straight positive-yard plays put the Rams inside the Athens 20, where Burke hit Cameron for a 17-yard touchdown reception. Hunsinger added the PAT and Wyalusing cut it to 21-14 with 3:04 left to play.

Athens' ensuing drive unraveled after they were called for an unsportsmanlike penalty, which forced them into a three-and-out, giving the Rams the ball back with about two minutes to play.

Back-to-back completions got Wyalusing to midfield with a new set of downs, but Athens called timeout and set their defense.
They forced the Rams into four straight incompletions and that was the game.
With the win behind them, Athens will now focus on Towanda, who they host next week.
“We’re going to enjoy this for a couple days then go back to work on Monday,” said Young.