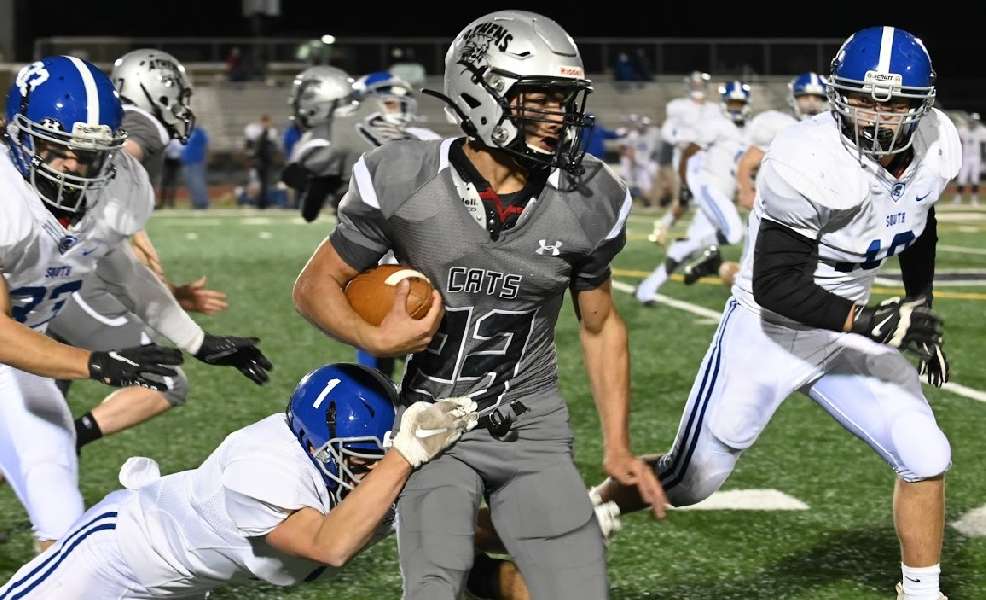 ATHENS — Athens scored in the final 30 seconds of the first half, and then three more times in the second half to erase an 18-7 deficit en route to a 35-18 win over South Williamsport here Friday night in NTL football action at Alumni Stadium.

“We did some gut-checking at halftime. We talked about physicality. We weren’t tackling well,” said longtime Athens coach Jack Young. “We changed our defensive plan in the second half, and we improved our tackling. To me, that was the key.

“(South) is a physical football team, and we talked about that all week,” noted Young. “We came out and did exactly what we wanted to in the first drive, then we let them push us around, and control the physicality of the game.

“We came out against a very physical offensive football team, and our kids responded. In the second half, they really responded.

“The bottom line is, we played three games in 13 days. That’s difficult, I don’t care who you are,” added Young. “It was a great team W.”

Young said the Wildcats played well on both sides of the ball in the second half, but the biggest play of the game was made on special teams — a blocked punt by senior Ben Pernaselli that set up the go-ahead TD in the third quarter.

“Ben’s is a game-changer. He changed that game with the blocked punt,” said Young. “On punt return, he has the green light to go get the ball if he thinks he can get it. He went right through the blocker, and blocked that punt — to me that was the game-changer.”

The Wildcats rushed for 273 yards, with 171 yards coming after the halftime intermission. Junior Shayne Reid led the way with 199 yards and two TDs on 22 carries, while sophomore Caleb Nichols had 33 yards and one TD on seven carries, senior fullback Tanner Dildine added 22 yards on three touches.

“Our senior linemen — Connor Sindoni, Lucas Aquilio, Ian Wright, Zac Gowin, who is a newcomer for us, Caleb Houseknecht, and Ben Pernaselli really stepped it up for us,” said Young.

After forcing South Williamsport into a punt on its first possession, Athens took the ball and marched 82 yards on seven plays to take a 7-0 lead. Reid covered 76 yards on five carries, including an 18-yard TD run with 4:44 left in the first quarter.

The Mounties scored on its next three possessions with Zach Miller doing the majority of the damage. He rushed for 125 yards and one TD on 16 carries in the first two quarters, but only finished with 152 yards on 27 carries.

Miller ripped off runs of 35 and 24 yards in South’s five-play, 67-yard scoring drive that was capped by QB Landon Lorson 3-yard TD run with 2:27 left in the first quarter. The point-after was no good leaving Athens ahead 7-6.

After a quick three-and-out by the Wildcats, the Mounties marched 63 yards on nine plays, with Miller carrying the ball seven times for 44 yards, including a 5-yard TD run with 8:55 remaining in the first half. The conversion failed, but South led 12-7.

The Wildcats got a quick first down on its next possession, thanks to a 10-yard pass from Lister to junior Karter Rude, but a penalty and a pair of negative plays left them facing 4th-and-24.

The Mounties needed just five plays to march 56 yards after the Wildcat punt, with Lorson connecting with Grant Bachman on a 29-yard TD hook-up with 4:05 left in the half to up the advantage to 18-7.

The Wildcat offense roared back to life on its next possession.

Lister completed three passes — 8- and 9-yarders to Reid, and a 16-yard completion to Rude, and Nichols picked up 17 yards on four carries to move the ball to the South Williamsport 9 with 37 seconds remaining in the first half.

The Wildcats caught a break when Reid’s fumble at the 1 was recovered by a Mountie as he rolled out-of-bounds, leaving the Wildcats with possession at the 1. Lister finished off the drive with a QB keeper with 28 seconds remaining.

The Wildcat defense bailed out the special teams early in the third quarter. On the opening kick of the second half, Athens failed to cover a squib kick, and the Mounties pounced on it at the Athens 19.

Six plays later, on fourth-and-goal at the 7, Grant Bachman hauled in a pass from Lorson, but Athens defensive back Jared Peterson made a TD-saving tackle at the 1.

The Wildcats picked up a pair of first downs to move the ball out of the shadow of their end zone, but eventually punted the ball away. Nichols’ 52-yard punt pinned the Mounties at their own 15.

Athens forced South into a three-and-out, and Pernaselli came up with a punt block, and Aiden Harford pounced on the loose ball at South’s 1-yard line.

“Our stop after a big, big mistake on the opening kickoff of the second half was huge, but Ben Pernaselli’s blocked punt was the game-changer,” said Young.

Lister scored on his second 1-yard plunge of the game on Athens’ first play, and Reid’s point-after kick made it 21-18 with 3:38 left in the first quarter.

The Athens defense forced another three-and-out, and the offense drove 78 yards on nine plays to increase its lead.

South Williamsport fumbled the ball away at its 25 on its ensuing possession, and Athens needed just two plays to find paydirt — a 20-yard run by Reid, and an 8-yard TD scamper by Nichols. Reid’s point-after kick with 7:38 remaining provided the final margin.

Later in the quarter, the Wildcats nearly added to their lead when sophomore linebacker Troy Jennings scooped up a Mountie fumble and rumbled 25 yards for an apparent score, but a block-in-the-back call negated the TD.