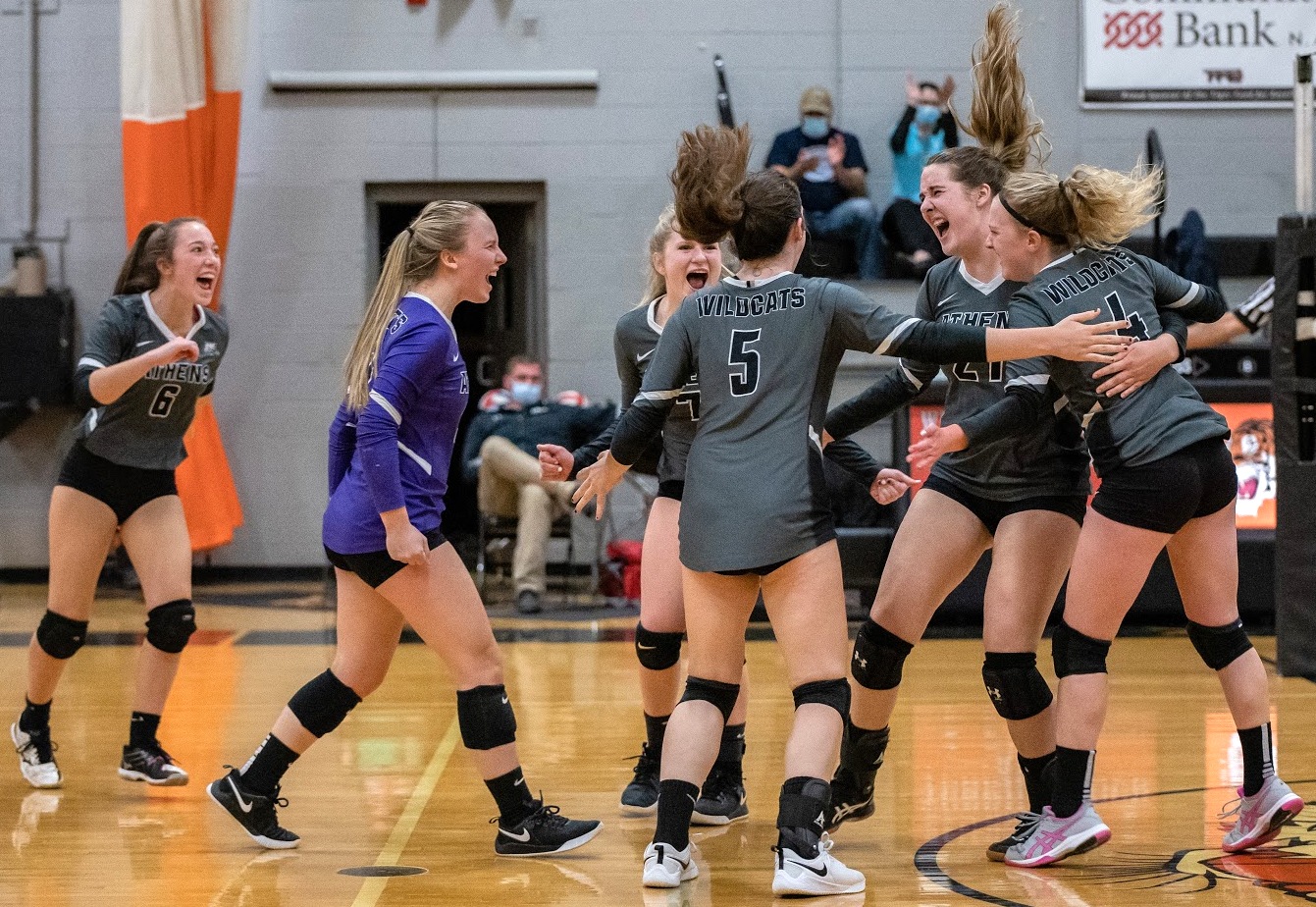 TUNKHANNOCK — Seventh-seed Athens was dominant at the net, and nearly flawless at the service line in a sweep of sixth-seed Tunkhannock here Monday evening in the semifinals of the District 2-4 Sub-Regional volleyball playoffs.

The Lady Wildcats will travel to Berwick Thursday for the championship match. It’s their first trip to a District finals since 2005.

“This was a little easier on my heart,” said Hanson. “I’m really happy with how the girls are playing.

“It was a little quiet,” she noted. “I think they were expecting it to be loud like Nanticoke was, and it was not at all, so we had to find it within ourself.

“The girls did well against a team we’ve never played before — typical when we play a team we haven’t played before, it’s hard for us to adjust, and we can be timid,” added Hanson. “I’m glad they got that our of the way early, and were able to dominate.”

“I’m so happy our hitters are peaking at the right time,” said Hanson. “They’re all gaining confidence, and they were in a groove tonight.

“We’ve had a strong middle game (Liechty and Jayne) the whole season,” she noted. “Now, we have our outsides (Taylor Walker and Ally Martin) stepping up.

“And, Jenny Ryan, who is typically a setter, has really stepped into the right-side position and has been dominating,” added Hanson.

The Lady Wildcats were successful on 64 of their 68 service attempts in the match, including a perfect 25-for-25 in the first first set.

“Our serves definitely set the tone for us,” said Hanson. “If we’re on, we’re tough to beat.

“It shows we’re focused and confident,” she noted. “When we serve well, everything else seems to fall into place.”

“And, Taylor Walker has been serving amazing the last few games. “added Hanson. “She had four aces tonight — beautiful.”

Athens took the lead for good early in the first set, at 8-3, on a six-point service run by junior Taylor Walker, which began with an ace and included a pair of kills by Jayne.

Tunkhannock closed the gap to 12-11, but a pair of service points by Liechty pushed the back to 15-11.

Moments later, Miller reeled off six straight service points, with Walker finishing off two points with kills, to give the Lady Wildcats a 21-13 lead.

Walker finished off the set with three points, with Ryan and Jayne polishing off the final two points with kills, for a 25-15 win.

The second set was close in the early going, with Tunkhannock taking the biggest lead at 13-10.

A side-out and two service points by Taylor tied the match at 13-13.

After the teams traded side-outs, senior Taylor Field served up four straight points, thanks in part to a pair of kills by Liechty, to give the Lady Wildcats an 18-14 lead.

Moments later, sophomore Jenny Ryan’s kill gave Athens the serve back with a 19-16 lead. She then served up three points, with junior Ally Martin and Liechty ending the first two points with kills, and Ryan serving an ace to end the mini-run that upped the lead to 22-16.

After trading side-outs, Martin gave Athens a 24-17 lead with a serve, but Tunkhannock regained the serve with a side-out.

Moments later, Liecthy ended the second set with a hard kill to give Athens a 25-18 win.

The Lady Wildcats didn’t have any long service runs in the third set, but steadily build a 15-8 lead. Tunkhannock trimmed the lead to 18-15, but never got any closer.

Jayne ended the match with a kill to give the Lady Wildcats a 25-19 victory and a trip to the Sub-Regional finals.

“Kayleigh Miller moved the ball around great tonight and kept everyone intense,” said Hanson. “Not only does she run to get every ball, she also plays incredible defense — it’s so impressive.

“She has been setting since I started coaching here,” noted Hanson. “She is a leader on the floor, and is great at communicating with who she is setting up, so the girls never get confused.”