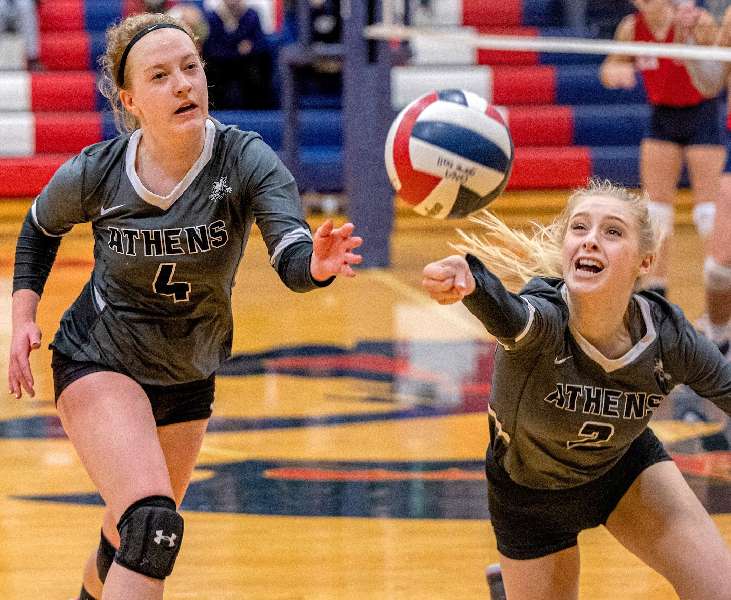 NANTICOKE, Pa. —  Seventh-seeded Athens won the first two sets, but needed to rally in the fifth set to pull out a thrilling 3-2 win over second-seeded Greater Nanticoke in the quarterfinals of the District 2-4 Sub-Regional volleyball playoffs.

The Lady Wildcats won decisions of 25-23 and 25-18 to take a 2-0 lead, but the Lady Trojans pulled out hard-fought 26-24 and 25-23 wins to even the match. In the decisive fifth set, Athens trailed by two points on three different occasions before rallying for a 15-12 win.

“The girls found a way to win, like they always do,” said Athens coach Heather Hanson. “I am so proud of them right now.

“To win the first two, then lose the next two, that is terrifying — to pull out that fifth set says so much about these girls,” added Hanson. “It’s a huge win for us.”

“We had no idea what we were coming up against.

“We had watched them on live stream, but I think it may have been their JV team because when we got here, they were all 6-feet tall,” laughed Hanson. “So, it had to be about us playing our own game, and not worrying about what they do.

“(Nanticoke is a good team. They were impressive,” she noted. “They were running their backside a lot, which we don’t see a lot of in the NTL. It was a different style of play from what we’re use to.

“The girls adjusted, though,” she added. “I’m beyond ecstatic with them.”

Greater Nanticoke jumped out to a quick 6-1 lead in the first set, but a five-point service run by senior Taylor Field, which featured one ace and three kills by senior Leah Liecthy, gave Athens an 8-7 lead.

The teams had just one service point apiece during the next service rotation and the score was tied at 14-14, until a six-point service run by Rylie Lewis gave the Lady Trojans a 20-14 lead.

After a side-out, Field served up three more points to trim the deficit to 20-18.

On Greater Nanticoke’s ensuing serve, Athens sophomore Jenny Ryan placed a perfect push shot from the net for a side-out to trim the deficit to 21-19.

Ryan then served up two points, including an ace and a kill by junior Ally Martin, to tie the first set at 21-21.

After an Athens side-out, Greater Nanticoke extended its lead to 23-21, before the Lady Wildcats took back the serve when the Lady Trojans were whistled for “two hands” on a set.

Trailing 23-22, Martin served up an ace to tie the score. On Martin’s next serve, junior Taylor Walker registered a kill to give the Lady Wildcats a 24-23 lead.

The return of Walker’s next serve ended up a bit long, and Liechty tipped the ball straight down to give the Lady Wildcats a 25-23 win.

The Lady Wildcats took a quick 4-0 lead in the second set, thanks to a side-out and a three-point service run by senior Kayleigh Miller.

Walker registered a kill for a GN side-out to give the Lady Wildcats a 24-18, then closed out the match with a kill after a Miller serve to finish off a 25-18 win.

“We overcame a few mistakes in the first two sets, and pulled out the wins,” said Hanson. “We played pretty well.”

The Lady Trojans never trailed in the third set. They led 19-14, but two serves by Walker tied the score at 24-24.

After a side-out, Athens had an unforced error to give Greater Nanticoke a 26-24 win.

The Lady Wildcats led 1-0 and 4-3 in the fourth set, but the Lady Trojans rallied to take an 8-6 lead, then stretched its advantage to 18-9.

After a side-out, Walker reeled off five straight service points to cut the deficit to 18-15.

The Lady Trojans built their lead back to 22-16, but a four-point service run by Martin, which included three kills by Liechty, tied the score at 23-23.

After a side-out, an Athens hitting error gave the Lady Trojans a 25-23 win in the fourth set.

“The key is how do you overcome errors?” said Hanson. “In volleyball, you have to shake it off.

“You can’t put about it, or dwell on it , or you dig yourself a five- or-six point hole, and that’s what we did in the third and fourth sets,” she added.

A service ace by Liechty, and a kill by Jayne on her next serve gave the Lady Wildcats the lead for good at 10-8.

A kill by Jayne gave Athens the serve back with an 11-9 lead. Jayne finished off Miller’s first serve with a kill, and her second with a block to give the Lady Wildcats a 13-9 lead.

After a side-out, Greater Nanticoke trimmed the Athens lead to 13-11, but a long kill attempt gave Athens the serve with a 14-11 lead.

The Lady Trojans forced a side-out, but on their first serve, Miller set Jayne, and her kill gave the Lady Wildcats the win.

Hanson said she used her timeouts early in the fifth set in an attempt to settle her team down. She was 50-percent effective.

“During the first timeout, I was pumped up, and gave them the ‘let’s go,” and that didn’t motivate them,” she laughed.

“During the second timeout, I told them to relax,” Hanson noted. “I know that’s what works with this team, but at times I get too excited as a coach, and that gets them excited. I had to calm down, and calm them down.

“This is the most intense match we’ve been in, in terms of timeouts back-and-forth,” added Hanson. “This is the first match where we’ve had to strategize our time outs to stop momentum. There weren’t a lot of major runs.”

“Kayleigh Miller has just been so steady, so consistent for us,” said Hanson. “And, Taylor Walker’s serves and hits were phenomenal again tonight — she is peaking at the right time.”

“We have this middle going on with Leah Liechty and Kylie Jayne, and they are amazing,” said Hanson. I keep telling (setter) Kayleigh (Miller) to keep going to the middles

“Our outsides are coming along, but I always want to run the middles.”

Several of Ryan’s kills in the early-going were touch shots to open spaces.

“She’s been practicing those shots every game, and finally she found a team it works against,“ said Hanson. “I told her if it’s working, keep going to it.”

Field tallied 37 digs, including several of the diving and one-handed variety, and and two aces.

“That’s T-Field, she always makes plays to keep the ball alive that make you shake your head,” said Hanson. “We see that out of her all the time.

“I’m so proud of her,” added Hanson. “She trained as a setter her entire life, and then I came in and needed a libero. I asked her, and she sacrificed everything to do it.”