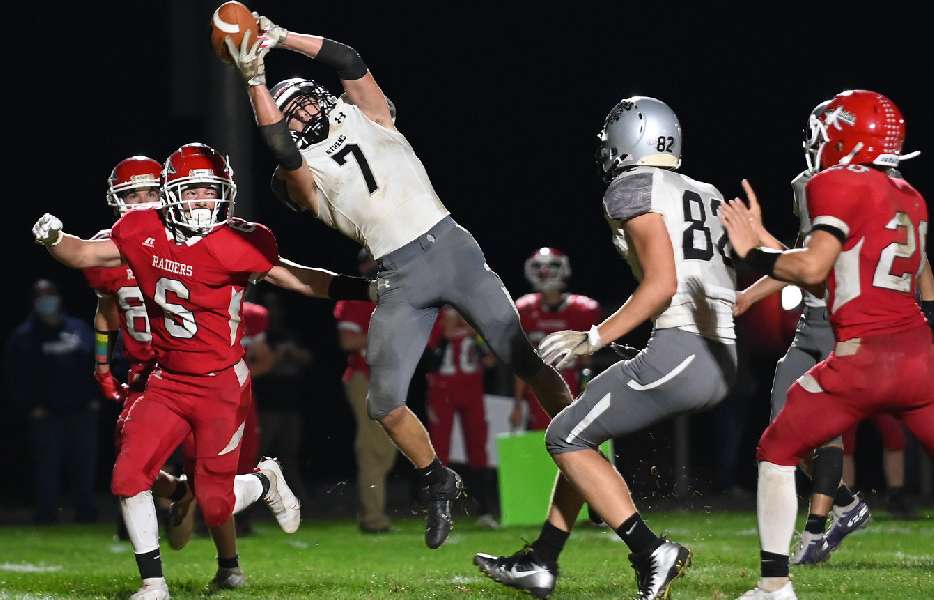 MONTGOMERY — Sophomore Caleb NIchols got Athens off on the right foot on the first play from scrimmage, and the Wildcats shook off “little” mistakes, thanks to big plays in a 35-7 win over Montgomery here Friday night in NTL football action.

“It was a long bus ride, and we weren’t sharp early— on either side of the ball,” said Athens coach Jack Young. “We made some mistakes, but boy, we made some big plays, too.”

Athens’ first little mistake was booting the opening kickoff out-of-bounds. That, however, overshadowed on Montgomery’s the first play from scrimmage when Nichols stepped in from of a Logan Almeida pass and sprinted 35 yards to paydirt. Shayne Reid’s PAT kick made it 7-0.

“Every time (Montgomery) tried to throw the ball deep down the field, something bad happened,” said Young. “We got a couple of picks tonight, which was nice because we haven’t had one in a while.

“And, teams are going to quit throwing to Caleb Nichols’ side because the kid is a player,” he added.

After an exchange of punts, Reid ripped off a 48-yard TD, then tacked on the extra point to make it 14-0 midway through the first quarter.

The Red Raiders responded with their best possession of the night, a nine-play, 61-yard scoring drive, capped by an 11-yard TD pass from Almeida to Devon Deem. Gabe McNear’s PAT kick cut the deficit to 14-7 early in the second quarter.

While the Wildcat defense contained Montgomery’s standout running back Kaide Drick on the scoring drive, Almeida did the majority of the damage, completing several short passes and rushing for 23 yards.

“If a team wants to dink-and-dunk us in the air, we’re going to let them a little bit,” said Young. “That’s better than getting beat over the top. And, we don’t want a guy to rush for 200 yards on us.”

The Wildcats held Drick, who was averaging 124 yards per game entering the contest and rushed for 277 yards in a win over Wyalusing last week, to 76 yards on 16 carries,

“We just wanted to keep building off the physicality we showed in the second half against South Williamsport,” said Young. “We were fundamentally sound defensively.

“If everybody just takes care of their job, then you’re going to do a pretty good job defensively,” he added. “I couldn’t be prouder of our defense.”

“We had some breakdowns defensively,” said Young. “We were missing a couple kids tonight, and it showed, but I’m super-proud of the young kids that stepped in and played hard.

“(Sophomore) Matt Machmer for one … he didn’t come here expecting to start at corner(back), but he’s a heck of a fundamental player, and that boy can tackle.

“Freshmen Josh NIttinger and Jason Dunn have been getting on the field a lot, which makes some of our older players better and fresher as the game goes on,” added Young. “That’s what I’m really proud of.”

The defenses ruled the majority of the second quarter, until junior Karter Rude’s 23-yard punt return set up Athens  at midfield.

A few plays later, the Wildcats were in the end zone on a 9-yard TD run by Nichols to up the lead to 20-7. The key play of the drive was a 23-yard pass from sophomore QB Mason Lister to fullback Tanner Dildine, who did most of the work with his legs.

The Wildcats opened the second half with a time-consuming 14-play possession, but an inopportune intentional-grounding penalty just inside the Montgomery 20 set them way behind the chains. They couldn’t recovered and were forced to punt.

Early in the fourth quarter, Montgomery moved the ball into Athens territory, but Rude picked off an Almeida pass and returned it to the Red Raider 33.

“Karter Rude told us all week long “i’m gonna get one,’ and he did,” said Young. “We had a good feeling he would based on what they do and how we were going to defend it.”

Athens fed Reid on the ensuing drive, and he accounted for 31 yards, including a 5-yard TD run. Lister’s pass to senior tight end Ben Pernaselli  provided the two-point conversion to give the Wildcats a 28-7 lead.

Montgomery clung to a sliver of hope on its next possession, but the Wildcat defense continued to stymie Drick, and the Red Raiders were forced to punt.

Reid drove the final nail into the Montgomery coffin on the punt, a short boot to the Athens sideline. With the Wildcat sideline yelling “poison, poison, poison,” Reid scooped up the punt and raced to the Red Raiders’ 8-yard line.

Reid led all ground-gainers in the game with 142 yards and two TDs on 21 carries, while Dildine added 15 yards on three carries.

Lister completed 9 of 20 pass attempts for 100 yards, and one TD. Babcock led the Wildcat receivers with four grabs for 40 yards and one TD, while Rude had two catches for 21 yards, and Reid had two receptions for 16 yards.

Almeida completed 11 of 18 pass attempts for 47 yards and one TD, but was picked off twice.

Athens, now 5-1, will likely travel to Danville Friday for the semifinals of the District 4, Class AAA semifinals. (The playoff pairings will be announced this weekend.)

(Matt Patton contributed to this story.)