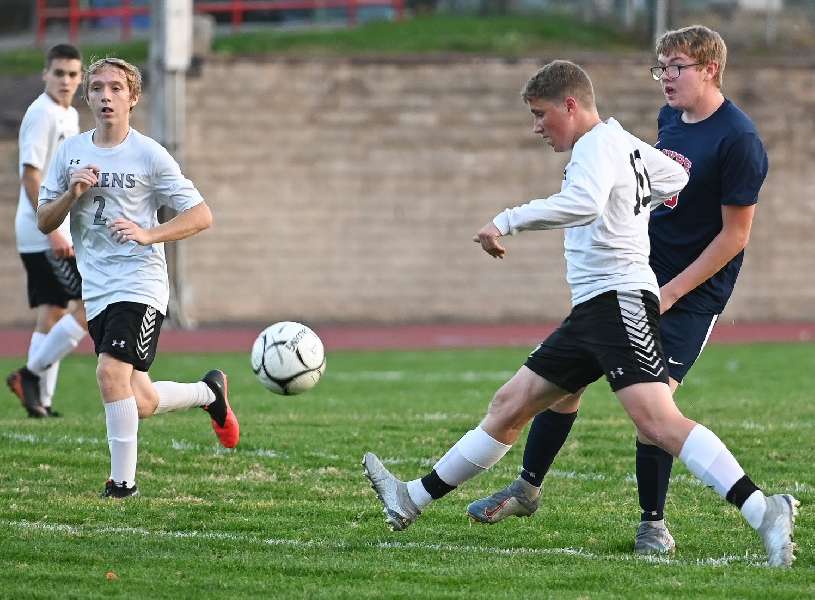 SAYRE — Senior Joey Toscano tallied a pair of goals, and four of his teammate also found the net as Athens rolled to a 6-0 win over Sayre here Thursday evening in NTL boys soccer action at the Lockhart Street Bowl.

After the Wildcats’ loss to Wellsboro on Oct. 13,  longtime Athens coach Jake Lezak said his team needed to play better. He liked what he saw Thursday.

“We have improved greatly in the last two weeks,” he said. “The players have been pushed for their technical side, and that’s really where we needed to improve the most. Tactically, I think we’re a smart team, and we understand the game.

“Technically we have a lot of deficits all over the place, and that’s what we’ve been focusing on — making sure we take care of the ball, our first-touches and making sure we connect.

“That was the problem against Wellsboro,” noted Lezak. “We were getting the passes off, and we were making the right runs, we were just passing it right to the other team.

“Tonight, we looked much better,” he added. “We played well.”

After playing Athens close in a 2-0 loss at Alumni Stadium earlier in the season, and with a return to health, Sayre coach Greg Hughey was expecting a close game Thursday.

“I’m very disappointed,” he said. “We’ve had some injuries, but we got everyone back, and we played a great game against Troy.

“Our communication was bad, too,” he added. “The second goal they scored in the first half was the result of poor communication … same thing with first goal in second half.”

Athens had a 14-5 advantage in shots-on-goal, although with the number of shots that sailed high and wide, it appeared much larger. The Wildcats also had a 4-3 edge in corner kicks.

Lezak said the key was controlling the ball, and keeping Sayre’s biggest offensive weapons in check.

“We knew that (Mason Hughey) and Cody (VanBenthuysen) needed to be kept in check,” he said. “They have great shots, and if they turn and you give them space, they’re going to put it on target.

“We knew defensively we needed to hold them down, but we also had to counter-attack and get out of there quickly.

“I think our backline did a fantastic job,” added Lezak. “(Hughey) put a lot of pressure on them, he’s a good player. He definitely kept us honest back there.”

Coach Hughey noted his team may have been relying too much on Mason Hughey and VanBenthuysen.

“We needed to push up a little more, and we didn’t do it,” he said. “We needed our center defensive-mids to be pushing up a little bit to help out. We had one or two guys running on offense, and that’s not enough against their defense.”

Toscano scored his first goal in the 23rd minute, and about three minutes later, junior Jason Gao made it 2-0, which is where it stood at halftime.

Junior Nate Quinn scored three minutes into the second half, which triggered a three-goal spree. Two minutes later, senior Travis Reynard rocketed a shot into the upper-90 to make it 4-0, and just 78 seconds after that, Toscano scored his second goal to make it 5-0.

“The third goal took the wind out of us a bit, then they just piled it up from there,” said Hughey. “We just fell apart defensively after that.”

Sophomore Ryan Thompson capped the scoring with 23:16 remaining in the contest.

Sophomore Cole Gelbutis recorded eight saves in net for the Redskins, and senior Asher Ellis had five for the Wildcats.

Athens wraps up the regular season at 11-2, while Sayre finishes at 5-8.

The Wildcats now await word on their official playoff seed, and a potential home game, while Sayre, unofficially in ninth place in the District 4, Class A power points rankings used to determine qualifiers waits to see if any team will decline the postseason opportunity, allowing the Redskins entry into the eight-team field.