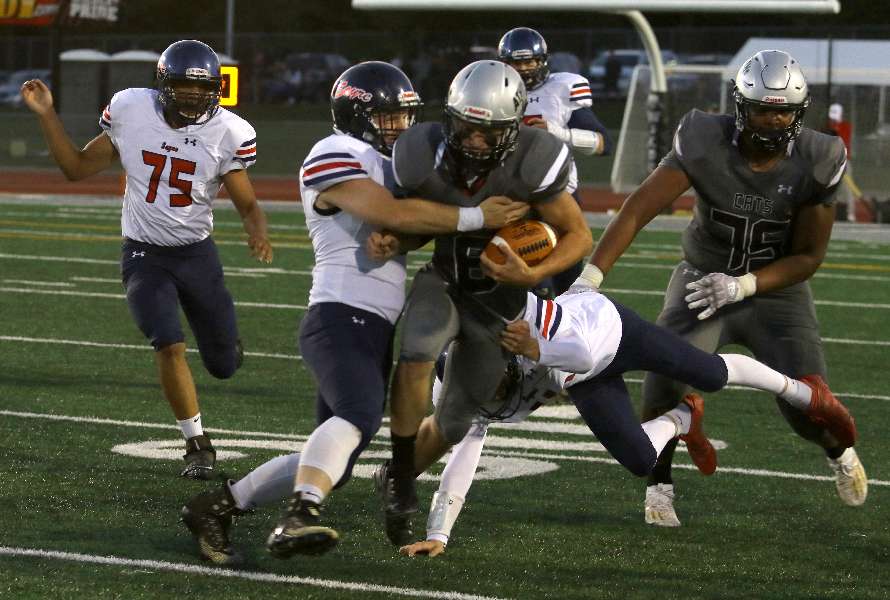 ATHENS — Hobbled by leg cramps for most of the second half, junior Shayne Reid split the uprights on a 27-yard field goal late in the fourth quarter to lift Athens to a 10-7 win over Sayre here at Alumni Stadium Friday night in the annual Rusty Rail rivalry game.

“It feels amazing. All I was thinking about was getting it through the two poles,” he said.  “Everything — the snap and the hold — was perfect.”

“Shayne (Reid) could barely walk,” said Athens coach Jack Young. “We carried him out onto the field, and he kicked the game-winner — they write stories about that kind of stuff.”

“It feels insane,” said Reid. “We all worked very hard for this. We worked all summer, and we came and got it.”

Young was pleased to bring the Rusty Rail back to Athens.

“It’s awesome,” he said. “As ugly as this game was, it really is what rivalry games are all about — battling back-and-forth and scrapping.

“I’m super-happy for the kids, it’s been a long three weeks,” noted Young. “I could not be prouder of our effort, and with how the kids hung in there.”

And ugly it was.

Athens was penalized 11 times for 115 yards, and committed three turnovers, while Sayre was flagged eight times for 50 yards, and also turned the ball over three times.

“We probably led the state tonight in penalties,” said Young. “Some of them were foolish, and they have to be corrected.”

“We gave the game away,” said Sayre coach Kevin Gorman. “We shot ourselves in the foot constantly with turnovers and penalties.

“Overall, I thought we played well offensively and defensively, but when it’s crunch time, we can’t fumble,” added Gorman.

The Wildcats used a big play on the opening kickoff to get a little early momentum as Reid reeled off a 30-yard return to the Sayre 49.

Sophomore QB Mason Lister completed three consecutive passes for 25 yards, including a 15-yard catch-and-run to Reid to move the ball to the Redskin 24.

Five plays later, Sayre senior Matt Lane stripped Reid of the ball after a 7-yard gain at the Redskin 5.

“We put together a nice drive and then turned it over in the red zone,” said Young. “We have to get better in that area … we have to eliminate those kinds of mistakes.”

“We coach that, when we’re gang-tackling, guys get in there and start ripping at the ball,” said Gorman. “It was a big play — a big turnover down deep.

“Kudos to (Athens), they came out throwing the ball,” added Gorman. “I knew they could do it, but I didn’t expect it. Our guys needed a little time to adjust, but once they did, they played well.”

On Sayre’s second play, junior David Northrop ripped off a 12-yard run, then junior Jake Bennett followed with runs of 8 and 13 yards to move the ball to the Sayre 37.

However, a pair of penalties bogged down the Redskin drive, and they were forced to punt. Disaster struck when the snap sailed over sophomore Lucas Horton’s head, and the Wildcats took possession after a 27-yard loss by the Redskins at the Sayre 11.

An offensive pass interference call against the Wildcats on their first play of the possession moved the ball back to the Sayre 26, but two plays later Lister rolled right under pressure and found Reid open in the back of the end zone for a 25-yard TD pass with 3:49 remaining in the first quarter.

Reid tacked on the extra point to give Athens a 7-0 lead.

After an exchange of possessions, Sayre used its ground game in a 12-play, 44-yard march to the Wildcat 15, before turning the ball over on downs with 5:12 remaining in the first half.

Athens picked up a pair of first downs, but fumbled the ball away, and the Redskins took over at the Wildcat 39 with 2:12 remaining in the first half.

A nine-yard run by Bennett, and a 15-yard run by Horton quickly advanced the ball into the red zone at the Athens 15.

The Redskins moved the ball to the Athens 3, but twice were flagged for illegal procedure, and ended up running out of time with the ball at the 3.

At the end of the half, Sayre had two opportunities, and we made plays — that’s what rivalry games are all about,” said Young.

“We didn’t give up any big plays tonight, and that was one of our goals.

“When teams put together a few first downs on you, it becomes a matter of digging deep and making a play, and we did that all night long,” added Young.

“We had our chances, especially late in the first half,” said Gorman. “We can’t make those kinds of mistakes when we’re on the doorstep like that.”

The second half started exactly as the first half did, except it was a 22-yard kick return by Northrop that set the Redskins up at the Athens 49.

After one first down, Sayre was forced to punt. Reid mishandled Horton’s punt, but recovered the muff at the Wildcat 9.

Five plays later, the Wildcats fumbled the ball away at their own 19.

The Redskins needed just one play — a 19-yard scamper around left end by Northrop — to find paydirt. Senior Nic Bentley’s PAT kick tied the game at 7-7 with 7:14 remaining in the third quarter.

After an exchange of punts, Athens sophomore Caleb Nichols stepped in front of a Horton pass and returned it 15 yards to the Sayre 26.

The Redskin defense, however, forced a quick turnover on downs, and gave the ball back to the Sayre offense at its 23.

After another exchange of punts, the Redskins took over at their own 10.

Two plays after runs of 13 and 8 yards by Northrop, Athens senior Tanner Dildine pounced on a botched Redskin hand-off to give the Wildcats possession at the 38.

Lister completed passes of 5 yards to sophomore Karter Rude, and 9 yards to Dildine to move the ball to the Sayre 24, and Reid then ripped off an 11-yard run — his longest of the game — to the Redskin 13.

After two rushing attempts and incomplete pass moved the ball just three yards to the Sayre 10, Reid lined up and delivered the game-winning 27-yard field goal with 2:17 remaining in the contest.

On the ensuing kickoff, Northrop broke free and galloped to the Wildcat 47, but a block-in-the-back flag brought the ball back to the Redskin 20.

Sayre moved the ball to the Athens 45 in short order, thanks in large part to a 32-yard completion from Horton to senior Tavone McClenny, but Athens senior defensive end Ben Pernaselli stripped Horton of the ball in the backfield moments later, and Dildine recovered with 42 seconds left to effectively end the game.

Athens rushed for just 58 yards on 27 carries, with Reid’s 33 yards on seven carries leading the way.

The Redskins rushed for 178 yards on 32 carries. Northrop led the way with 95 yards on 15 carries, and Bennett added 84 yards on 14 carries.

Horton completed 4 of 14 pass attempts for 47 yards, and was intercepted once. Josh Arnold had two grabs for nine yards, and McClenny had one catch for 32 yards.

The Wildcats return to action Friday at Canton, while the Redskins are off until Sept. 25 when they host Cowanesque Valley.