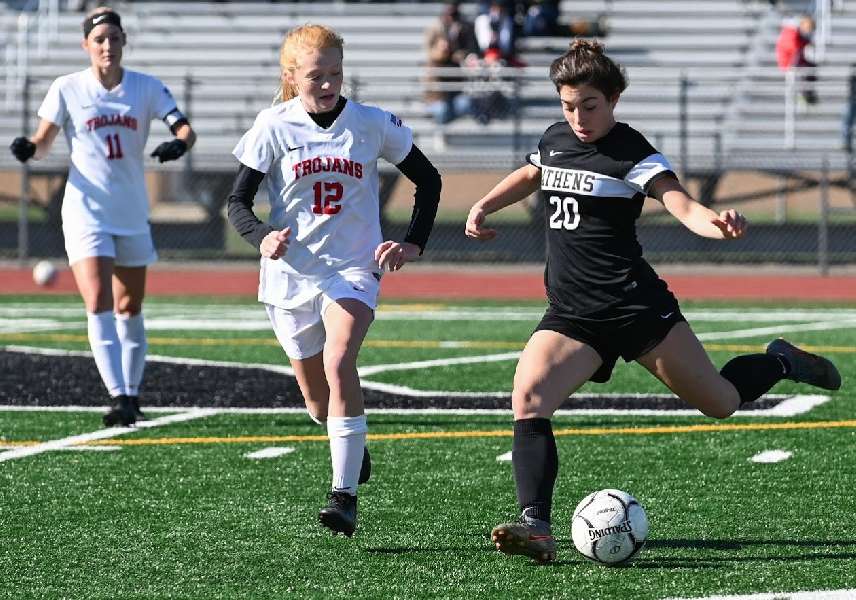 ATHENS — Athens had a big advantage in time of possession, and shots-on-goal, but Troy took advantage of its chances in a 2-1 win — handing the eight-time defending league champs its first league loss at home in nine years — here Saturday morning in NTL girls soccer action.

The Lady Wildcats outshot Troy 19-5 in the loss.

“That seems to be a theme we’ve had throughout the season,” said Athens interim coach Nick Soprano. “We get our chances, the girls possess and bring it up well, from defense to offense, but in the attacking-third, we can’t seem to put it in the net.

“Give credit to Troy, they took advantage of their opportunities, even though they had fewer than we did,” added Soprano.

The Lady Trojans were playing in their first game since Sept. 26, and longtime coach Wayne Pratt was impressed by his team’s performance.

“We always bring our best … every team brings their best against, let’s face it a dynasty. Athens is an awesome program, they are the team to beat every year.

“To be off for as long as we’ve been off, and for them to come together this quickly says a lot about these ladies,” said Pratt.

“There were two great teams on the field today. I can’t say enough about the Wildcats,” added Pratt.

Troy spent much of the game in its defensive end, but scored twice on quick counter-attacks.

“We prepared for that. We talked to the girls about (Troy’s) usual game plan is,” said Soprano. “As soon as they get the ball on their foot, they’re looking down the line, over our back line to pepper it.

“Most of the time we defended it well, a couple of times we didn’t,” added Soprano.

“We had four days to prepare for this game,” said Pratt. “The ladies worked on possession, and our forwards have worked on being more accurate with their touches, as well as their shots and it paid off today.”

“We showed up, and we put it all together today,” he added.

The Lady Wildcats controlled the opening minutes of the game, but in the 8th minute Troy hit on a quick counter-attack, and Makenna Matthews scored from close range to give the Lady Trojans an early 1-0 lead.

About 4 1/2 minutes later, Athens senior Emma Roe slid a centering pass to sophomore Ally Thoman, but her shot sailed over the crossbar. It proved to be a familiar sight on the day.

With 19 minutes remaining, senior Hannah Blackman made a run down the far sideline, and centered it to Roe, but her shot sailed high.

With 12 minutes left in the half, Troy keeper Olivia Tate barely beat Roe to a through-ball. Tate was shaken up in the resulting collision, but remained in the game.

Less than two minutes later, Roe’s shot deflected off a Troy defender, and freshman Norah Reed collected the rebound and fired off a shot, but Tate was on the spot for the save.

About 70 seconds into the second half, Roe placed a beautiful pass into the box, where senior Hannah Blackman controlled it, but her quick shot sailed high.

Less than two minutes later, Troy’s Nicole McClellan drove down the sideline, touched a pass to Matthews in the center of the box. Matthews quickly touched it to Addison Parker at the far post, and she drove a shot into the back of the net from about 10 yards out to make it 2-0 with 37 minutes remaining in the contest.

Pratt said the quick goal was something his team discussed at halftime.

“We were gassed at the end of the first half … three weeks off will do that to you,” laughed Pratt. “This is kind of like a second season for us.

“We talked about it at halftime,” he noted. “We told the ladies we needed to get another goal because we knew a 1-0 lead would not hold up against a great team like Athens.

“We came out (of halftime), and we executed,” added Pratt. “We got that early goal and it energized us a bit.”

The Lady Trojans had a couple more scoring opportunities in the second half, but the majority of action was in Troy’s defensive end, with the Lady Wildcats peppering shots on the net. Tate made several good saves, and her defense use their bodies to shield her from several more shots.

With 31 minutes remaining, Thoman and Roe executed a perfect give-and-go, but Thoman’s shot from 20 yards out whizzed just over the crossbar.

About 6 1/2 minutes later, Thoman centered a ball into the box, and Blackman ht a hard volley right at Tate, who handled it cleanly.

With 7:45 remaining, Roe fed Walker with a pass about 15 yards from the goal mouth, but Walker’s shot skimmed the top of the cross bar.

With 3:21 remaining, the Lady Wildcats finally penetrated Troy’s defense when Roe slid a pass between two defenders to Thoman in the box. In a 1-on-1 with the keeper, Thoman drove a shot into the back of the net to trim the deficit to 2-1.

The Wildcats got off a couple more shots in the final minutes, including one by Blackman that sailed harmlessly over the crossbar as the final horn sounded.

“We played hard at the end,” said Soprano. “I think if we would have competed a little bit more in the first half, we would have been able to put a couple away and get this game where we wanted it.

“I thought the second half, especially the last 20 minutes, we showed what Athens soccer is all about,” he added. “We just need to put together a complete game to compete with them.”

Tate had 11 saves in net for Troy, while sophomore Abby Champion had five for Athens.

“We get them again Tuesday at their house,” said Soprano. “We have a few things to sharpen, but I think with the way we ended the game, the girls know we can compete against them, and win.”