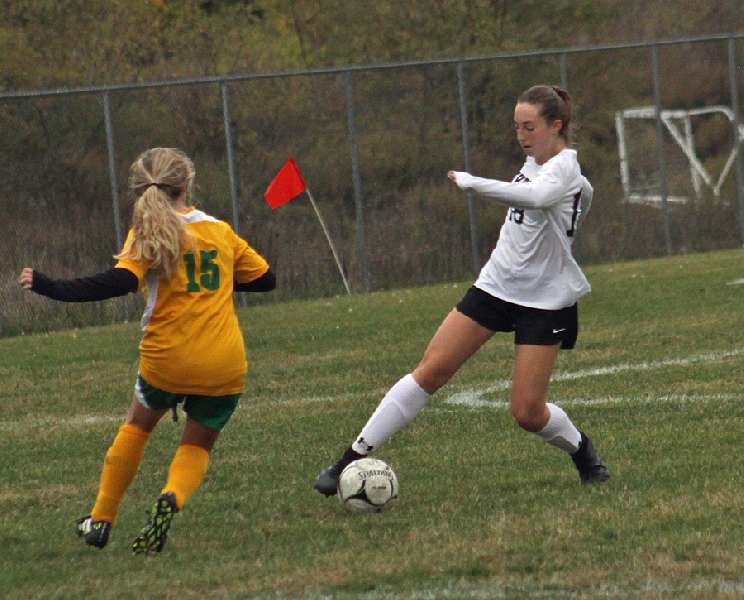 WYALUSING — Down a goal late in the second half Athens had its only clean look at a ball in front of the Wyalusing net. Two Wildcats converged on it to shoot, only to have the ball sail over the crossbar.

That was how the afternoon went for the Lady ‘Cats in their 2-1 loss to Wyalusing in NTL girls’ soccer action Monday.

The loss was the first for Athens in league play in Pitts’ tenure — now in its fifth season. Entering the game, Pitts’ record in NTL games was 57-0-3.

“I thought we played well. It’s a tough field … it’s like a little postage stamp, but that’s what they have, so that’s what you show up and play on,” said Athens coach Rich Pitts. “I thought our girls fought the whole game, and played our style of soccer.

“That’s the game sometimes,” noted Pitts. “It’s the law of averages, I guess. Eventually, we are going to lose.

“Hats off to Wyalusing. They played hard, they played well. They played guys tough (at Athens), and they played us tough tonight on their own field, with some good crowd support,” added Pitts.

Athens’ last league loss was a 2-1 setback to Sayre at the Lockhart Street Bowl on Oct. 24, 2015. It snapped a 64-game regular-season league win streak.

The Ram defense was able to contain Emma Roe, Hannah Blackman and Ally Thoman much of the day while getting big goals from Alexis Capone and Marissa Johnson. Johnson’s was a penalty kick.

Thoman did break through in the second half to cut it to 2-1, but they didn’t get any closer than that, despite outshooting Wyalusing 12-6 and having a 5-2 edge in corner kicks.

Early in the game, the Wildcats had the Rams bunkered down with a series of corner kicks, but the defense held as Athens couldn’t get a clean look in the box. After that, for much of the first half, they tried long-range shots, but Wyalusing goalie Pearl O’Connor easily swallowed them up.

Wyalusing’s first good chance to score came at 31:20 as Olivia Haley got a breakaway. She aimed for the top right corner, just like her winner at Towanda, but this time it was a couple feet outside the right post.

It was a preview of how the Rams would score at 22:19 as Capone got free down the left side of the field. She buried it past the Athens goalie Abby Champion for the 1-0 lead.

Late in the half, Thoman had the best look yet for the Wildcats, coming in from the left side she had a free look at the goal. She shot low, but O’Connor was ready, scooping up the ball to preserve the 1-0 halftime lead.

The beginning of the second half saw some wide-open play as both teams made runs. Athens continued to control possession, but the Rams weren’t hunkered down like early in the first half.

The Wildcats had a good chance to score at 26:35 as a Hannah Blackman shot rebounded off of O’Connor. Norah Reid crashed for the opportunity, but O’Connor cleaned it up.

At 22:30, Haley had a free run down the left side, but her shot was just wide. Athens wasn’t able to clear it, though, and a minute later Haley drew a foul inside the box on the Wildcats.

Johnson took the penalty kick and calmly buried it in the left corner for a 2-0 Wyalusing lead.

“The PK was really soft. I thought our defender did a good job, but (the official) thought it was a PK,” said Pitts. “The (Wyalusing) girl didn’t lose possession of the ball, and didn’t fall down. I’m not sure how it was a PK, but it was because (the official) called it.”

Just as things were looking dire for Athens, its offense seemed to wake up. After drawing a foul, they had a direct kick in Wyalusing’s end. The ball ended up on Roe’s foot.

Her shot bounced off a Ram defender only for Thoman to pick it up. She found a seam on the left side of the defense and snuck it past O’Connor to trim the deficit to 2-1 with 21:07 left to play.

Haley tried to answer at 11:45 with a run, but after that it was all Athens.

They moved Hannah Walker up from the backline, and she put O’Connor on notice with a bullet from outside the box. O’Connor managed dive in front and knock it away, but it was a harbinger of things to come.

With 6:07 left, Wyalusing had its first miscue defensively and let a cross roll free through the box. Two Athens players converged on it, but the shot went over the crossbar.

Then at 4:30, the Wildcats had back-to-back chances, the first off of Walker’s foot that forced O’Connor to make another diving save, and the second was blocked by a Wyalusing defender to preserve the 2-1 lead.

That seemed to be Athens’ last gasp as Wyalusing was able to clear it.

The Wildcats now play Towanda Wednesday as they fall into a tie with Wellsboro at 7-1-1 in the NTL standings. Wyalusing is just behind both teams at 7-2.