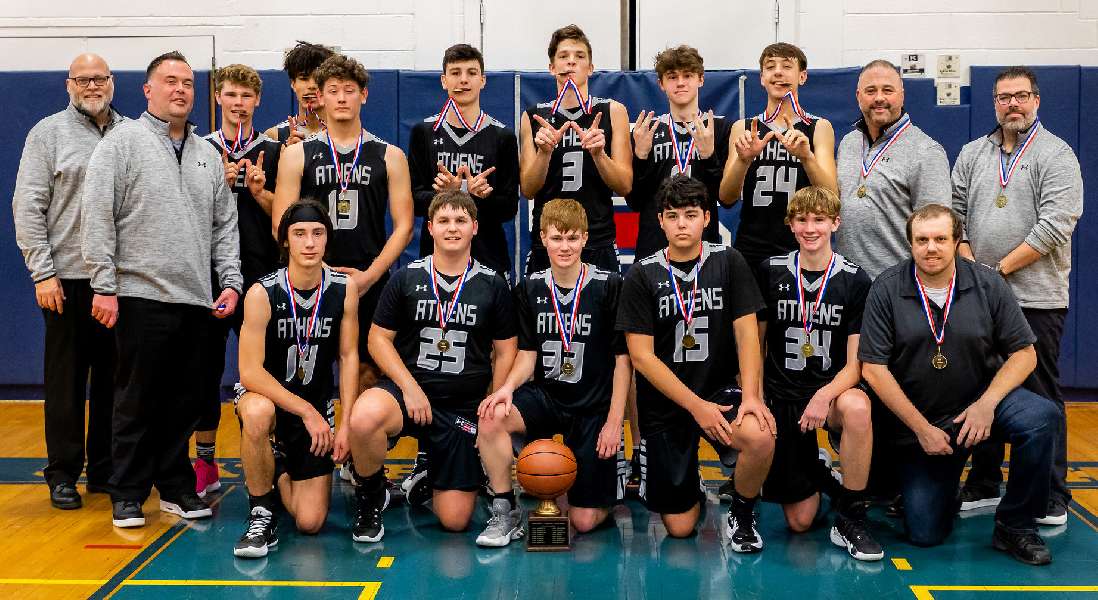 SAYRE - After a close opening-round win over Waverly, Athens wanted to set the tone early against Towanda in the Valley Christmas Tournament boys' basketball championship game on Thursday. And they did that, and more, jumping out to a 14-0 lead in the first four minutes and never looking back en route to their 69-36 win over the Knights.

"It's awesome," Athens coach Jim Lister remarked. "You know, this was our first goal of the year, we wanted to come out and play well, and win this Christmas Tournament, and we accomplished that, so we're thrilled."

They led 25-6 after the opening quarter, though in the second Towanda would cut it to a 12-point deficit. However, Athens used another 25-point third quarter to pull away for the win.

"We played a great first quarter today, I was really happy with the way they played," said Lister. "They kind of got a little bit lackadaisical in the second, but they came out, and got it done in the third."

"It feels great, one last ride with my brothers; it just feels good all around," remarked Babcock. "We just came out really intense. We wanted this one more than anything, and we knew Towanda was going to bring it, but we had to bring it more."

Ten different players scored for Athens as 12 Wildcats saw the court in all, especially a lot of the younger players.

"It's really big for them," Babcock said about the next generation of Wildcats seeing the court. "I really preach to them, "˜watch us, and it'll make you better, and the more playing time you get, with all this crowd, and everyone here, it makes you better. You'll learn how to play in big games like this.'""¨
Tucker Brown added 11 points to go with five assists, and two steals, while Mason Lister added eight points, five assists, four boards, and three steals."¨ Kolsen Keathley notched six points, three boards, and two steals, while Nalen Carling had five points, and eight rebounds.
Korey Miller netted five points, Carson Smith added four points, Chris Mitchell, and Ryan Thompson had three points each, while Troy Pritchard rounded things out with two points, while also grabbing eight rebounds.

The Wildcats used four lay-ups - two of them and-1s - a jumper, and a Babcock dunk to take a 14-0 lead right after the opening tip.

It was the freshman Wheaton getting Towanda on the board with a mid-range jumper, but two more Athens lay-ups by Carling and Babcock saw them go up 18-2.

The two teams would trade lay-ups, followed by a Hartmann bucket off a Shrawder assist put Athens up 20-6.

A Brown bucket, followed by a Thompson 3-ball made it 25-6 Athens at the first-quarter horn.

Shrawder bagged a 3-pointer to open the second quarter, and it spurred a 4-1 Towanda run in the first minute-and-a-half.

Babcock would net four straight points to put them back up 28-10, but a Schoonover lay-up at the 3:35 mark started another Towanda spurt. He was followed by a Ottaviani bucket to make it 30-14.

After a pair of Babcock free throws, Hartmann notched a lay-up, with Lambert following that up with a 3-ball to cut it to 32-19 with 1:35 left in the half.

That's as close as Towanda would get it as Athens would finish the half on a 4-1 run as Pritchard and Smith had lay-ups to put the up 36-20.

In the third, the two teams would trade buckets, but then the Wildcats went on a 5-0 spurt to go up 43-22. A Lister lay-up started that scoring spree."¨
Hartmann would answer for Towanda with back-to-back buckets to cut it to 43-26, but 13 straight points by the Wildcats in a little over two minutes in the third quarter effectively put the game out of reach."¨
Brown led the spurt, with two lay-ups, and three free throws, as Athens jumped out to a 56-26 lead.
"¨
Another Lambert 3-ball would cut it to 56-29, but Miller answered with a 3-pointer for Athens, and Keathley hit a lay-up to put them up 61-29."¨
In the fourth quarter, the Wildcats out scored Towanda 8-7.

Things don't get any easier for Athens as they take on Williamsport on Monday, then tip-off NTL Division-I play later in the week.

"I keep saying, we're not going to be able to take a night off," Lister said about the next few weeks. "Every night is going to be tough, and we're talking about it, and we will be prepared for it."