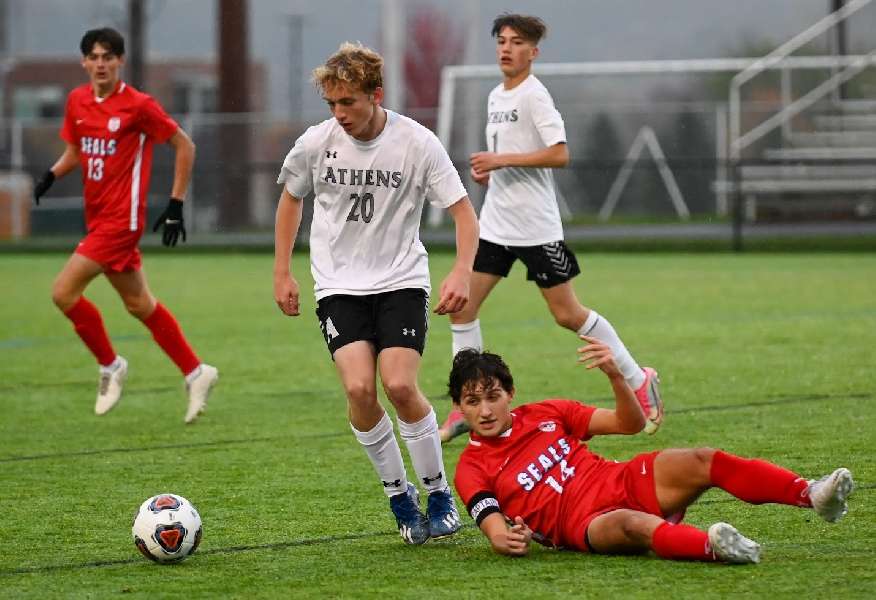 MIDDLEBURG — Nick Ritter scored four goals — all in the first half — to lead second-seeded Selinsgrove to a 7-0 win over third-seeded Athens in the semifinals of the District 4, Class AAA boys soccer playoffs here Saturday afternoon at Midd-West High School.

“We knew (Ritter) was a great goal-scorer, and he proved that today,” said Athens coach Jake Lezak. “We knew he was a good player, and we didn’t take care of business.

“We gave him too much room to play,” noted Lezak. “He stayed off our line, and created his own space. He did what a great goal-scorer does.

“I just don’t think we played against enough dynamic players like him to have been really prepared for that.

“And, once we got down, it was all uphill from there,” added Lezak.

About 4 11/2 minutes into the game, Ritter made a strong run down the left wing, and scored his first goal to put the Seals up 1-0.

About four minutes later, Ritter struck again. Six minutes after that, he headed in a corner kick for his hat trick to extend Selinsgrove’s lead to 3-0 with 25:20 left in the first half.

With 14 minutes remaining in the first half, Ritter collected a through-ball and deposited a shot into the back of the net to make it 4-0.

The Seals tacked on three goals in the second half — two by freshman Jace Diehl and one by sophomore Jake Keeney. Ryan Mangels had two assists.

Selinsgrove had a 21-3 advantage in shots-on-goal.

The Wildcats wrap up the season with a 12-7 record.

“I’m really proud of the boys for the season we had,” said Lezak. “We lost a lot of games, but it was a really tough schedule.

“We bounced back and won the league this year. The guys can hang their hat on that,” noted Lezak. “And, we had some non-league wins they can be proud of.

“Some of the other games gives us something to work for next year,” he added.

For the third year in a row, the Wildcats will graduate a large group of seniors.

“I think they had as big of an impact off the field, as they did on the field for us,” said Lezak. “These guys do a lot of great things for the school and the team, and provide a lot of leadership.

“It’s definitely going to be tough to fill those shoes,” he noted. “They’ve had great careers.

“Last year was a down year for us in a sense, but we bounced back this year,” added Lezak. “I don’t think teams thought we’d be at this point this year, having to replace so many guys three years in a row.”