ATHENS BOUNCES BACK FROM LOSS TO BLANK NEB, 5-0 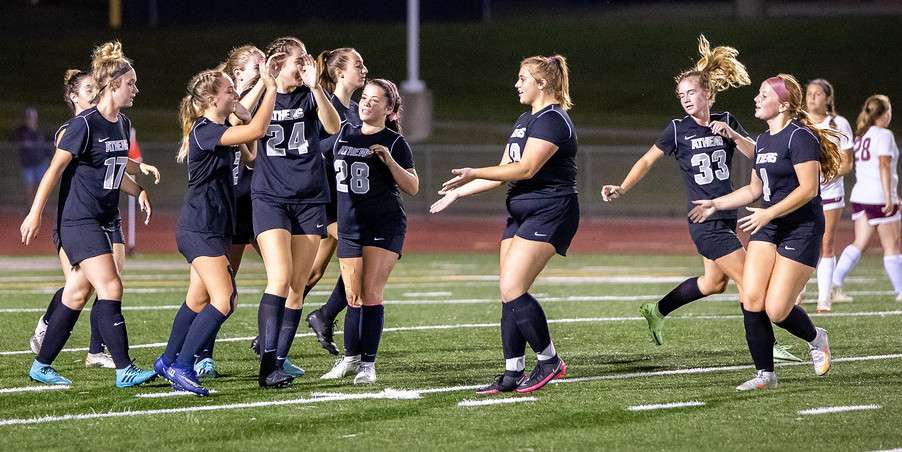 ATHENS — Athens bounced back from its first league loss Tuesday with a dominant performance in a 5-0 win over Northeast Bradford here Thursday night in NTL girls soccer action.

“It’s a great bounce-back win for us,” said Athens coach Rich Pitts. “We played amazing soccer throughout the match.

“We feel like we are hitting our stride at the right time, but understand after Tuesday night, we have no room for error,” noted Pitts in reference to the Lady Wildcats’ 3-2 home loss to Wyalusing.

“We played a really talented NEB team tonight and performed at a great level,” added Pitts. “We were able to go deep into our bench and allow players who have been working very hard to get valuable playing time for the future.”

The Lady Wildcats took an early lead when sophomore Kendra Merrill took a through-ball from senior Delaney Stedge and deposited it into the back of the net.

In the 27th minute, senior Hannah Walker took a feed from freshman Addison Wheeler and beat the NEB keeper for the first of her three goals in the game to make it 2-0.

About six minutes later, sophomore Mya Thompson set up Walker for a point-blank shot extend the lead to 3-0, which is where it stood at the half.

In the opening minutes of the second half, Walker returned the favor and set Thompson up for a close-range shot that found the net to make it 4-0.

Walker finished off her hat trick with an unassisted goal about three minutes later to push the Lady Wildcat lead to 5-0.

Holly Towner put NEB on the board in the 75th minute to provide the final margin.

The Lady Wildcats, now 8-5 overall, are 6-1 in the league and tied atop the NTL standings with Troy. They play at Troy Saturday morning.