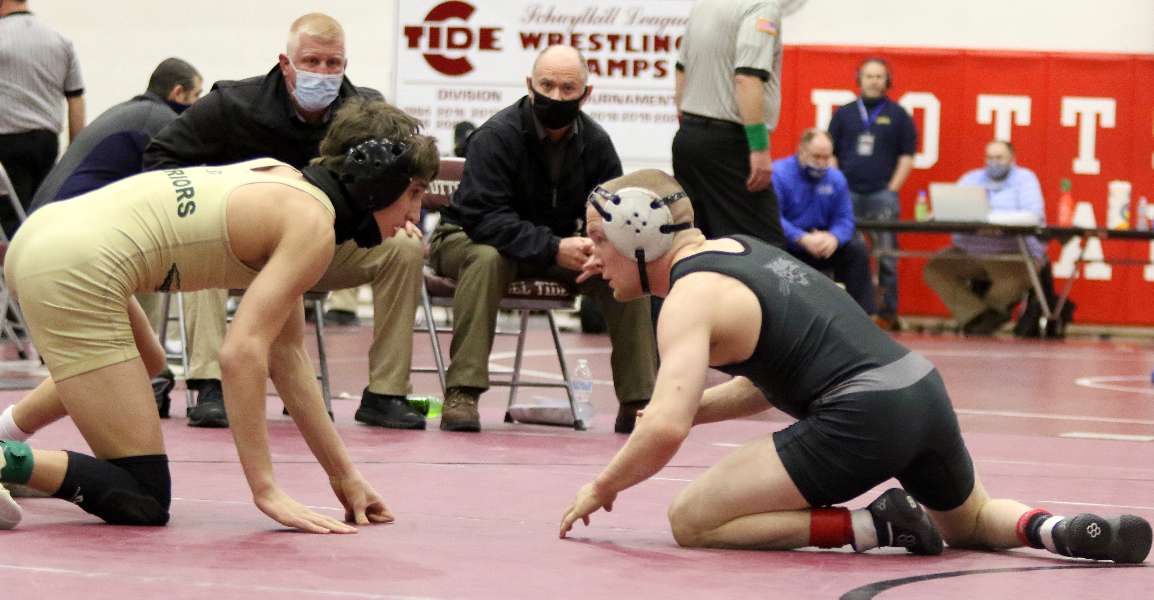 LEWISBURG — Despite trailing, Athens junior Gavin Bradley seemed to have momentum on his side in a battle of the top-two ranked 113-pounders in the state, until an illegal mat return nearly brought the PIAA Eastern Super Regional championship match to a premature conclusion here Saturday afternoon at Martz Hall.

Bradley, the state’s top-ranked 113-pounder, trailed Wyoming Area’s Jaden Pepe, 7-4, after two periods, and chose bottom to start the third. He immediately got to his feet, but Pepe lifted Bradley, while pinning his left arm to his side, and returned him to the mat.

The official immediately stopped the match after Bradley’s left shoulder and head were the first things to hit the mat. After a seven-minute stoppage, Bradley, who was awarded a penalty point for the illegal return, was allowed to continue.

Bradley scored a quick escape to trim the deficit to 7-6, but couldn’t dent Pepe’s defenses, ultimately giving up a takedown with 21 seconds remaining to seal Pepe’s 9-6 win.

“We had (Pepe) broke until we got slammed,” said Athens coach Shawn Bradley. “(Pepe) got a seven-minute break after the slam, or that’s a different match. He was gassed.

“It was a tough one. (Gavin) could have won that match three different ways, but he didn’t, so that’s something to work on,” noted Shawn Bradley. “It is what it is. We have to work on that and come back next week.

“Kudos to Gavin for getting up and wrestling again,” added Shawn Bradley. “Honestly, the trainers didn’t want him wrestling.”

The loss is the first of the season for Bradley, who is now 38-1. Bradley owns a 5-3 victory over Pepe in the finals of the Northeast Regionals.

“Hopefully, it motivates him, that’s the bottom line,” said Shawn Bradley. “This match didn’t really mean anything. Next week is the one that matters.”

Pepe started fast with a takedown just 8 seconds into the bout. He was able to ride top for 43 seconds until Bradley scored an escape to trim the deficit to 2-1. The duo spent the final 69 seconds of the period on their feet.

Pepe scored a reversal just 10 seconds into the second period for a 4-1 lead. Bradley escaped wth 1:18 remaining, and 25 seconds later collected a takedown to tie the bout at 4-4.

Pepe escaped moments later to take a 5-4 lead, then, in a wild scramble, ended up with a takedown with 17 seconds remaining in the second period.

“Gavin should have had a takedown there, and he gave up a takedown, and almost back points,” said Shawn Bradley. “He had to score there, that was a big one.”

“Gavin should have been in control at the end of the second period, going into the third period; that was a big takedown,” added Bradley.

Bradley returns to action Friday in Hershey at the PIAA, Class AA Championships.