ATHENS' BRADLEY WINS FIRST BOUT AT SUPER REGIONAL BY FALL; ONE WIN AWAY FROM STATES 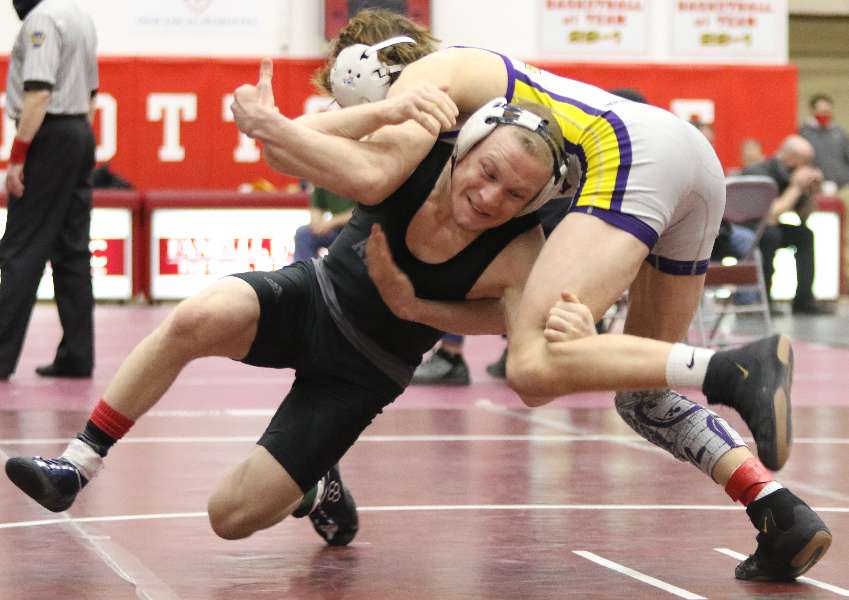 LEWISBURG — One down, one to go.

After a second-period fall in his quarter-final match here Saturday morning at the PIAA Eastern Super Regionals, Athens junior Gavin Bradley is just one win away from his third trip to Hershey, and better yet, his third PIAA medal.

“(Gavin) doesn’t even know it right now, but he only needs one win and he places at States,” said Athens coach Shawn Bradley.

“If he goes out and wrestles like that, there’s no one in the State that can beat him, but that’s up to him,” added Bradley.

After riding top for more than a minute, Bradley cut Barber loose with 44 seconds remaining, then scored a takedown four seconds later to take a 4-1 lead.

Bradley mercilessly worked on top, and turned Barber with a turk for three near-fall points with 7 seconds remaining to take a 7-1 lead into the second period.

Bradley chose neutral and scored a go-behind takedown just 7 seconds into the second period, then quickly cut Barber loose to make it 9-2.

Bradley scored another takedown with 1:23 remaining, and 21 seconds later finished off another turk for a fall at 2:58.

Coach Bradley said they had watched some tape on Barber this week.

“Honestly, you see everything on the Internet now.

“I watched (Barber) wrestle, and he has techniques that worried me a little bit,” said Bradley. “Gavin (Bradley) did what he had to do to stay away from those.

“And, he just kept the pace super-high,” Bradley added.

Coach Bradley said the win takes the edge off for the younger Bradley.

“It’s a new atmosphere, so it kind of relaxes him a little bit,” said Coach Bradley. “He was a little nervous earlier, but this (win) helps.

Gavin Bradley, now 37-0, won’t need to watch tape on his next opponent, South Williamsport’s sixth-seeded Robert Gardner, who improved to 35-2 on the season with an 8-5 win over third-seeded Adam Schweitzer of Notre Dame Green Pond in the quarterfinals. Bradley beat Gardner, 7-1, in the District 4 finals.

“Gavin just needs to keep the same approach he’s had all year, so nothing changes,” said Shawn Bradley. “If we can keep it so he doesn’t feel tension, and he can just wrestle, he can beat anybody.

“If we let something get to him, then it puts him in a spot where he has to overcome that, too,” he added.