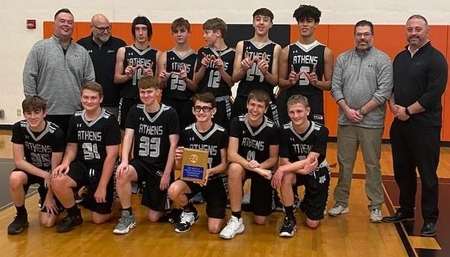 TOWANDA - Athens raced out to a quick double-digit lead, and cruised to a 47-18 win over Towanda here Wednesday afternoon in the championship game of the junior varsity boys Valley Christmas Tournament.

Chris Mitchell pumped in 10 points, while Xavier Watson and Matt Aquilio added four points apiece to fuel a 21-4 blitz in the opening stanza.

The two teams played even in the second quarter, thanks to a pair of buckets by Noah Hobday, and the junior Wildcats led 27-10 at the half.

Five different Athens players put their names in the scoring column in the third quarter in a 10-run that  extended the lead to 37-10. Eleven of Athens' 13 players on the roster scored in the win.