ATHENS FALLS AT SHAMOKIN IN CLASS 4A SEMIFINALS 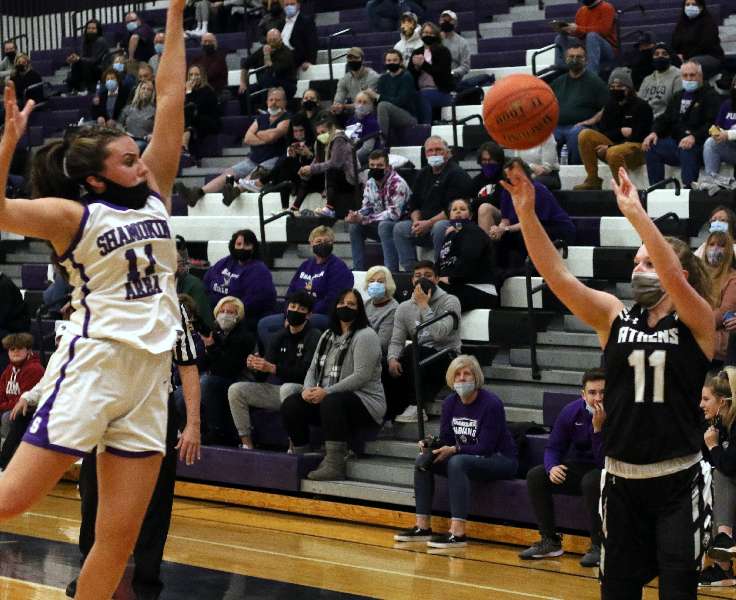 COAL TOWNSHIP — Athens turned in its typical strong defensive effort, but could not buy a ticket in a 32-25 loss to Shamokin here Monday night in the quarterfinals of the District 4, Class AAAA girls basketball playoffs.

The Lady Wildcats shot 26 percent (10 of 38) from the field, including a 2-for-15 (13 percent) performance from behind the 3-point arc. The grabbed nine offensive rebounds in the game, but seven were in the first half.

“The nature of the game, with what the officials allowed … was a physical  game,” said Miller. “When you have two teams that are physical and there are only seven fouls called, that’s a tough team to play against, especially for our team.”

Athens took the lead on its first possession of the game on a nice low-post move by junior Caydence Macik, but Shamokin scored the next eight points.

Macik scored on another move in the low blocks with 34 seconds remaining in the first quarter, trimming the deficit to 8-4, and ending an Athens scoring drought that last 7 minutes and 11 seconds.

The Lady Wildcats were held without a field goal in the second quarter, and made just 3 of 7 free throw attempts, but their defense was stellar, limiting Shamokin to just six points in the stanza. The Lady Indians led 14-7 at the half.

“We scored seven points in the first half, and we were still in the game,” said Miller. “We felt like if we had made a couple shots, or cut out a couple of our defensive mistakes, we would have been right there.

“We did some good things, and played well defensively,” added Miller.

Athens cut the lead to two points, at 14-12, with 5:56 remaining in the third quarter on a lay-up by Macik, who moments later drained a 3-pointer from the top-of-the-key.

Macik scored a pair of buckets in the final two minutes, sandwiched around a basket by Grace Nazih to trim the Shamokin lead to 24-19 heading into the final eight minutes.

“It seemed like there were several occasions where we would get the lead to two, and then it would be eight,” said Miller. “We’d make a nice run to get it back to three, and they would get it back out to eight. It was frustrating.”

Athens committed a pair of turnover on its first two possession of the fourth quarter, and the Lady Indians turned them into transition buckets by Madison Lippay and Nazih to stretch the lead to 28-19.

“When you’re playing a very good defensive team like Shamokin, it’s very tough to come back when you’re down like that,” added Miller.

Moments later, Nolter scored on a drive to the bucket to push the lead back to seven points, at 30-23, and end Shamokin’s 4-minute and 32-second scoring drought.

Athens finishes the season at 17-7.

“This was the 100th (varsity) basketball game for these seniors … they were 69-31; that’s pretty good,” said Miller. “For those girls to play that many games in four years is impressive.

“This is a great group of girls. They are good basketball players, and they are good kids.

“The Athens basketball community was truly lucky to watch these fours girls play the last four years,” noted Miller. “They brought exciting basketball to our school and were a pleasure to coach and watch.

“It will be difficult to replace them. It will tough to lose players like that who work hard in practice, and are leaders,” added Miller. “Hopefully, we can find someone to step up, and we can keep the program where it is.”