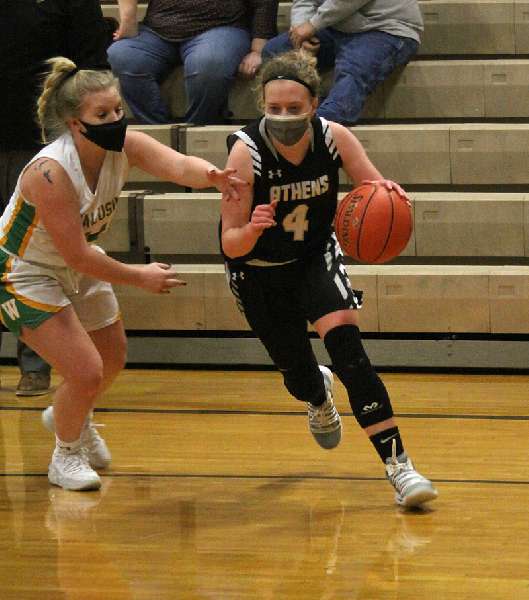 WYALUSING — It just didn’t seem like it was going to be Athens’ night in Wyalusing.

The Wildcats missed three practices this week, their bus was late getting them there, and much of the game was looking like deja vu from a year ago when the Rams upset them to send the NTL title to Towanda.

And it ended up a lot like last year’s game as Wyalusing won 31-28 in NTL Division-I girls’ basketball action Thursday.

Both teams were sloppy, and struggled with shots they normally see go in the hoop. Athens’ also turned the ball over 16 times as Wyalusing focused on stopping Kayleigh Miller and Caydence Macik.

“A lot of things hurt us tonight,” said Athens coach Brian Miller. “We looked lethargic at times after three days off … the bus got us here late and refs wouldn’t give us additional time to warm up — that’s unacceptable in my book. It’s about the players, not the refs.”

For much of the game, Wyalusing was content to milk the clock when they had the ball, making each possession count that much more, and making each turnover or missed basket hurt much worse.

“We made some bad passes and missed some basketball we normally make,” said Miller. “The nature of play favored Wyalusing. When we shoot four foul shots on the night, and they only commit two fouls in the first half …”

Macik and Miller both finished with 12 points. Miller added four boards, two steals and three assists, and Macik chipped in with five boards.

Miller shot the ball well, as she was 3 of 4 on 2-pointers and 2-for-4 from deep, but Wyalusing’s Hailey Jayne stuck to her most of the night, making it difficult to get her shot off.

And whenever Macik got the ball in the post, the Rams doubled her, forcing her into six turnovers.

The two teams opened the game by trading buckets. A Miller 3-ball gave Athens a 5-2 lead, an advantage they held until the 4:18 mark of the first quarter when Putnam scored on a driving lay-up. She missed the and-1, but it put Wyalusing 6-5.

A Brown bucket two minutes later saw the Rams lead increase to 8-5. A Collins jumper cut it to 8-7 but Wyalusing went on a 4-0 run in the last minute as Botts hit a lay-up, followed by Putnam draining two free throws with 1.9 seconds left in the quarter, extending Wyalusing’s lead to 12-7.

That lead evaporated quickly, as a Miller 3-ball and Bartlow jumper tied things up at 12-12 less than three minutes into the second quarter.

The Rams answered with back-to-back lay-ups from Putnam and Bennett, giving them a 16-12 lead.

Miller followed with a jumper, but a Putnam 3-point play — this time she hit the free throw after making the lay-up — saw the Rams keep Athens at arm’s length, taking a 19-14 lead.

Then, in the final three minutes, Athens went on a 5-0 run. Miller found Macik for a lay-up, then Macik got her own lay-up and foul combination to make it 19-all at the half.

Only six points total were scored in the third as the defenses settled in. Wyalusing continued to keep Macik and Miller from having clean looks, while on the other end, the Rams were patient, but struggled to penetrate Athens’ defense.

Then, with under a minute to go, Jayne hit a long jump shot to once again break the tie, giving the Rams a 23-21 lead going into the final stanza.

After a scoreless first two minutes, Miller tied things up with a runner for Athens. That was followed by Macik going 1 of 2 from the free throw line, giving the Wildcats their first lead since early in the first quarter.

It was short-lived as Bennett came alive for the Rams, scoring back-to-back lay-ups, the second with 1:30 left in the game, to put Wyalusing up 27-24.

On Athens’ ensuing possession, Macik hit a lay-up and was fouled, but missed the freebie, allowing the Rams to stay up 27-26.

The two teams traded turnovers as game went under a minute before Brown was fouled on a lay-up attempt. She hit both free throws to make it 29-26.

The two teams traded turnovers again before Miller hit another runner to cut it to 29-28 with 22 seconds left on the clock.

Taking the ball out on the side after an Athens foul, Jayne hit a streaking Bennett, who got behind the defense, for a lay-up, plus a foul. Bennett missed the free throw, giving Athens hope of a tying 3-pointer with 17.4 seconds to play.

On Athens’ final possession they tried to get Miller an open shot, but the Rams hounded her, at one point triple-teaming her. She finally got a shot off, but it was blocked. The Rams recovered the ball and watched time tick off the clock.

Miller was incensed at the officiating on their final possession.

“Three fouls on our last possession and nothing was called,” he said.

The loss drops Athens (7-1) behind Towanda (7-0) in the NTL Division-I standings with the two teams slated to meet in the first of two contests on Saturday with a 1:30 p.m. start.