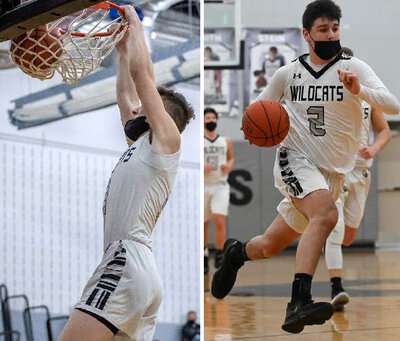 North Penn-Liberty’s Brian Litzelman and his coaching staff was voted “Coaching Staff of the Year.”

FIRST TEAM
J.J. Babcock, junior, Athens: A versatile 6-5 swingman, Babcock could score in transition, from the perimeter, and in the low blocks.

He led the Wildcats in scoring at 14.8 points per game, while shooting 48.5 percent from the field. He also led the team with 24 blocked shots and 61 deflections.

Lister was second on the team at 10.8 points per game, and averaged 4.8 rebounds per game.

Also named to the first team were Troy’s Mason Imbt and Ethan Vannoy, and Wellsboro’s Liam Manning and Darryn Callahan.

SECOND TEAM
Tucker Brown, junior, Athens: One of the premier defenders in the league, Brown was a much-improved player on the offensive end of the floor.

Nalen Carling, junior, Athens: Long and athletic, Carling was a big contributor in his first season at Athens.

Carling averaged 9 points, a team-high 6.6 rebounds, 1.5 blocks, and 1 steal per game. He shot a team-best 49.1 percent from the field, and also led the team with a 71.9 percentage from the free-throw line.