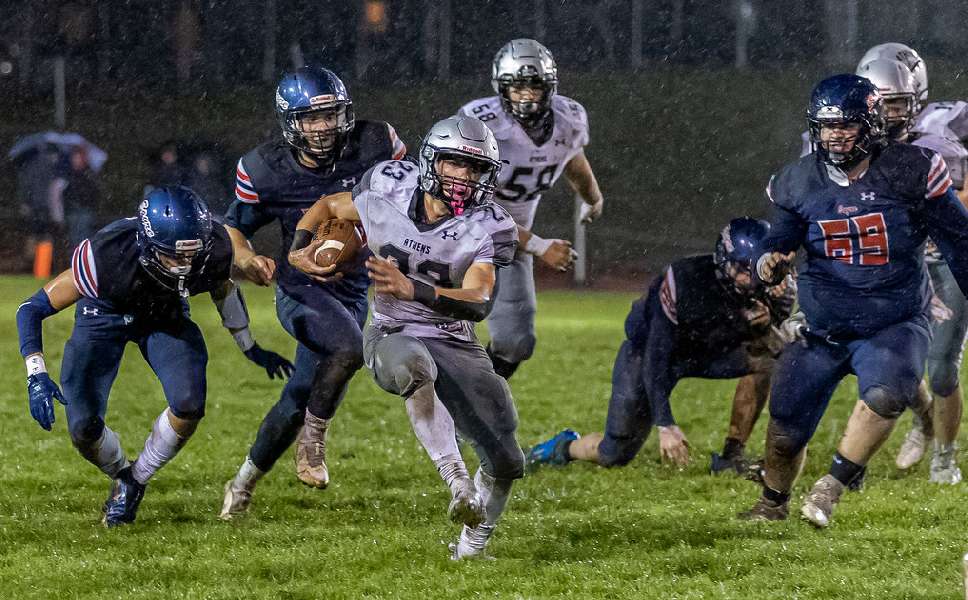 SAYRE — A costly penalty, and a perfectly-executed extra-point kick in a steady rain on a muddy field proved to be the difference in Athens’ 7-6 win over Sayre here Friday night in the annual “Rusty Rail” rivalry game at the Lockhart Street Bowl.

“This is a special group. They are tough,” noted Young. “We didn’t play like ourselves the last two weeks.

“I’m so happy for this group because the last couple weeks have been really tough,” he added.

“It was a good game, but I don’t know that it was our best game,” said Sayre coach Kevin Gorman. “That’s the big thing with us, we’ve kind of whiffed the last three weeks.

“I know the kids are upset about it, and the (coaching staff) is too.

“Hopefully, next week we can get into playoff mode and get something rolling,” Gorman added.

Sayre senior Brayden Horton returned the opening kick 39 yards to the Athens 40. After one first down, the Redskins possession bogged down after a holding penalty, and a short punt gave the Wildcats the ball at their own 26.

Athens senior tailback Shayne Reid ripped off 38 yards on six carries, but the Redskin defense stopped Athens inches short of a first down on fourth-and-1 at the Redskin 30.

After an exchange of punts, Sayre took over at its 25, and put together its only scoring drive of the night.

Senior tailback David Northrup’s 10-yard run gave the Redskins their initial first down of the drive, then he hauled in a 12-yard reception from Brayden Horton for another first down to the Wildcat 44.

Four plays later, on fourth-and-4, Brayden Horton rolled left and found Lucas Horton open along the home sidelines for a 38-yard TD to give the Redskins a 6-0 lead with 6:25 remaining in the first half.

Athens junior Caleb Nichols batted down Brayden Horton’s pass on the conversion to keep the Sayre lead at 6-0.

The Wildcats came out throwing on their ensuing possession. Lister connected with senior Karter Rude on three consecutive passes for 6, 6 and 15 yards to move the ball to the Sayre 26.

Two plays later, on third-and-7, Lister rifled a pass into traffic to 6-5 senior J.J. Babcock for an 11-yard gain to the Sayre 12.

Four plays later, on fourth-and-3 at the Sayre 5, Lister was flushed out of the pocket, and his pass sailed over the head of Rude in the back of the end zone. However, Sayre was flagged for roughing-the-passer, giving the Wildcats new life at the Sayre 3.

“We were just dumb,” said Gorman. “We had the roughing-the-passer and later on a couple personal fouls … to win games, you can’t do that.

“It was fourth-down, we got some pressure on Mason (Lister), and he threw it high,” noted Gorman. “We would have gotten the ball back … (but) they end up scoring, and that won the game for them.

“You can’t keep shooting yourself in the foot, but we just keep doing it,” added Gorman.

After Lister moved the ball inside the 1 with a QB sneak, the Redskins stuffed him on second down. On third down, Reid bulled into the end zone to tie the game at 6-6 with 31 seconds remaining in the half. Reid’s PAT kick made it 7-6.

“We had a breakdown in coverage and (Sayre) took advantage, but I couldn’t be more proud of the way our offense came back out and answered,” said Young.

“You could hear it in on the sidelines, it was different this week. The guys were saying, ‘we need to answer,’” noted Young. “And, we answered with a great drive. We had a couple big plays, a couple big throws, catches, runs, and we put one on the board.

“And, I think we have the best kicker in the area … to execute a kick in this mess means something, and that was the difference in the game,” added Young.

Reid also accounted for the winning points in last year’s “Rusty Rail” game, with a 27-yard fourth-quarter field goal to lift Athens to a 10-7 win.

“How bout that, I’ll take it,” laughed Young.

The rain, which was steady for the entire first half, picked up in intensity during halftime, and both offenses struggled for consistency in the second half.

The Wildcats quickly moved the ball to the Sayre 34 on their first possession, thanks to an 18-yard run by Reid, and an unsportsmanlike conduct flag against the Redskins, but a low shotgun snap resulted in a 15-yard loss.  Three plays later, Athens punted.

Sayre’s first possession was a three-and-out, and Lucas Horton’s 36-yard punt gave the Wildcats the ball at their own 31.

After one first down, a pair of penalties put the Wildcats in a second-and-31 hole at their own 22. Two plays later, Reid was stacked up by the Redskin defense, and junior Zach Garrity stripped him of the ball, and recovered it at the Athens 32.

A 10-yard run by Brayden Horton moved the ball to the Wildcat 22, but the drive stalled there, and Athens took over on downs.

After the Wildcats punted the ball back to Sayre, the Redskins picked up one first down. On fourth-and-2 at the Athens 42, senior Jared Peterson picked off a Horton pass with 6:28 remaining in the game.

Athens’ offense did little, but a pair of third-down personal foul penalties against Sayre moved the chains.

The Wildcats eventually punted, and Sayre took over at its 21 with 2:03 remaining in the game.

After picking up a first down on a roughing-the-passer call against the Wildcats, Horton’s fourth-down pass was intercepted by Rude and returned to the Sayre 27 with 1:23 remaining.

Athens took a knee twice in victory formation to run out the clock.

Reid led all ground-gainers in the game with 117 yards and one TD on 28 carries. In all, the Wildcats ran for 111 yards on 40 carries.

“I’ll tell you what, 23 (Shayne Reid) doesn’t have much left in his tank,” said Young. “He ran hard, and the guys blocked their tails off.

“When it’s like this, you just pile int he box, and see who can tough it out,” he added.

The Redskins had 153 yards in total offense (compared to Athens’ 157.)