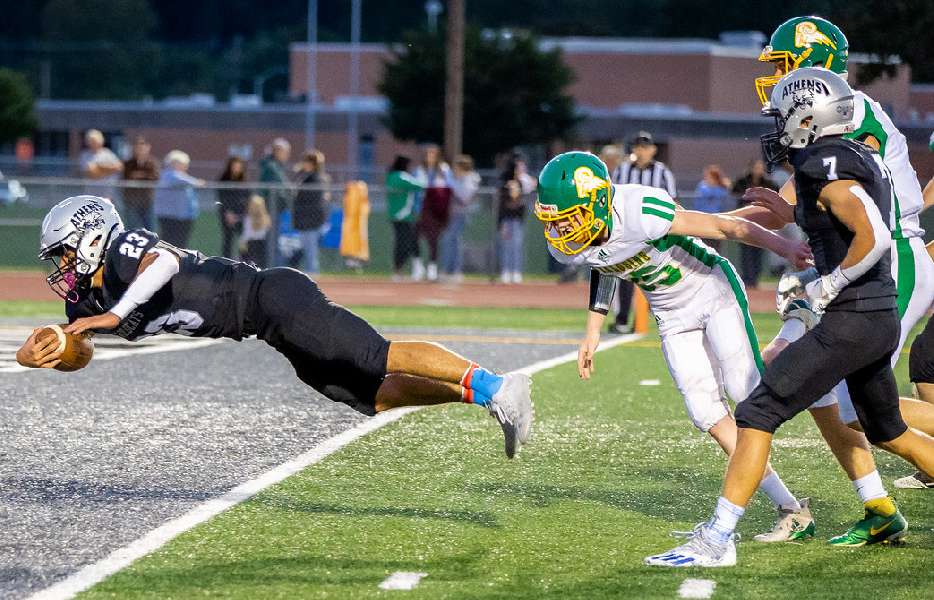 ATHENS — Athens scored on all seven of its first-half possessions en route to a 44-0 halftime lead, and a 46-6 win over Wyalusing here Friday night in NTL Large School Division football action at Alumni Stadium.

The Wildcats led 14-0 less than five minutes into the contest.

“We talked about starting fast,” said Athens coach Jack Young. “We wanted to do some no-huddle stuff, and play fast.

“We did exactly what we wrote up.

“We took a little bit of a beating up front last week, and we didn’t execute real well on either side of the ball,” noted Young.

After forcing Wyalusing into a three-and-out, Athens took over at its 45 on its first possession of the night.

Senior tailback Shayne Reid carried the ball four times for 27 yards, and caught a 9-yard pass from junior QB Mason Lister to move the ball to the Wyalusing 17.

Reid then bobbed-and-weaved his way through the Ram defense on a 17-yard TD run, then added the extra point to make it 7-0 with 7:31 remaining in the first quarter.

QB Blake Morningstar was flushed out of the pocket, and threw a ball up for grabs. Senior linebacker Troy Jennings picked off the pass and returned it 15 yards to the Ram 32.

The Wildcat pressure on Morningstar was a recurring theme throughout the game.

“We talked about putting pressure on him,” said Young. “(Morningstar) is not a runner, he’s not going to take off with it.

“We wanted to be in his face, and make him uncomfortable.

“He didn’t have a couple of his weapons with him tonight, but at the same time I thought we executed much better,” added Young.

The Wildcats needed just one play to add to their lead as Lister found senior wideout Karter Rude near the goal line for a 32-yard TD strike. Reid again split the uprights to make it 14-0 with 7:12 remaining in the first quarter.

After picking up its initial first down of the contest on its next possession, Wyalusing turned the ball over on downs at its 42.

Athens needed just four plays to find paydirt this time. Reid started the drive with a 13-yard run, and capped it with a 3-yard TD run. In between, a scrambling Lister found Rude near the sidelines with a 26-yard pass to the Ram 3.

Nolan Oswald returned the ensuing kick 37 yards yards to the Athens 49, but the Rams failed to pick up a first down. A 31-yard punt by Morningstar pinned the Wildcats at their own 18.

The Wildcats quickly moved the ball down the field on a drive that featured runs of 8 and 31 yards by Rude, and 11-yard run by Reid, a 9-yard run by Jennings, and an 8-yard pass from Lister to Babcock, but a pair of penalties bogged the drive down at the Wyalusing 22.

On its ensuing possession, Wyalusing netted just seven yards on three plays and lined up to punt facing 4th-and-3 at its own 27. The Rams appeared on the brink of a long TD when a receiver broke free behind the Wildcat defense on the fake punt, but he was unable to haul the pass in, and Athens took over on downs.

Junior Caleb Nichols reeled off 26 yards on three carries, and Lister finished off the short scoring drive with a 1-yard TD to push the lead to 30-0 midway through the second quarter.

Wyalusing drove into the red zone on its next possession, but turned the ball over on downs at the Wildcat 18.

The Wildcat defense forced another punt on Wyalusing’s next possession, and following a short punt, the Athens offense took over at its 49.

Athens needed just four plays to finish off the first-half scoring. The drive featured a 10-yard run by Reid, and a 23-yard pass to Rude, and culminated with a 15-yard pass from Lister to 6-5 J.J. Babcock, who won a jump ball in the back corner of the end zone for the score.

Reid’s extra point kick made it 44-0 with 11 seconds remaining in the half.

Reid rushed for 120 yards and two TDs on 11 carries in the first half, caught two passes for 69 yards and one TD, and booted a 39-yard field goal. He also knocked two kickoffs into the end zone for touchbacks, and consistently pinned Wyalusing deep its own territory on kickoffs.

“He was out here yesterday kicking 50-yard field goals, and he hit a big one for us tonight.

“He is so talented, and he never takes a play off — in a game or in practice,” added Young.

Lister completed 9 of 14 passes for 182 yards and three TDs.

The second half was played entirely in running time.

The Wildcats tacked on a safety late in the game, while Wyalusing’s score came on a 5-yard TD pass from Morningstar to Oswald with 1:21 remaining in the contest.

Morningstar completed 9 of 31 passes for 73 yards and one TD, while being intercepted twice. Oswald led Rams receivers with five grabs for 24 yards, and Joey Gonsauls had two catches for 45 yards.