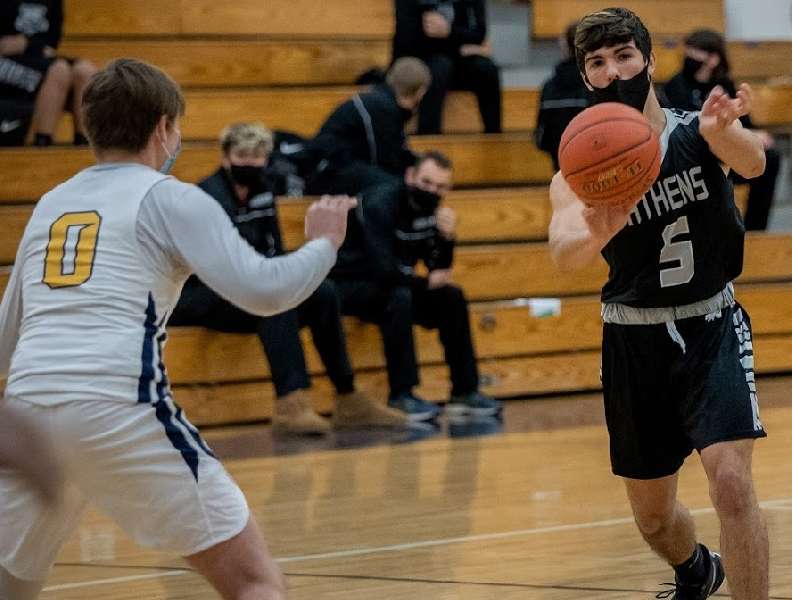 The win was the first for rookie Wildcat head coach Jim Lister.

“I was a little bit nervous starting off the day, even though I was telling everyone I wasn’t,” he laughed. “I just wanted to get this first one behind us.

“I was thrilled for the kids today. They’ve been put on pause too long,” Lister noted. “They were ready to go, and I was real happy for them.

“It was a good day overall, and it’s a good way to start the season,” added Lister.

Sophomore Mason Lister triggered the game-opening run with a 3-pointer just 20 seconds into the contest, and sophomore Carson Smith capped it with a 3-pointer with 1:20 remaining in the first quarter.

In between, J.J. Babcock scored eight points. He finished the scoring in the opening stanza to give the Wildcats a 23-8 lead.

Lister said his team accomplished what it set out to do.

“Everything we preached all week, the kids played out in the game plan today,” he said. “It worked out well.

“We’ve been preaching playing good defense and playing as a team. I thought we played really well today,” noted Lister. “The team defense was excellent, there were a lot of steals, a lot of turnovers, and a lot of lay-ups.”

The Wildcats, who scored the first five points in the contest and never trailed, recorded 25 assists to just 14 turnovers.

Lister and Babcock scored nine points apiece in the second quarter to fuel a 26-9 run that extended the Wildcat lead to 49-17 at the halftime intermission.

Lister went to his bench in the second half, and it responded.

“Our guys of the bench played well,” said Lister. “They moved the ball well.

“They had their opportunity today and took advantage of it, which is great,” he added.

Babcock, who made 12 of 17 shots from the field, led the Wildcats with 25 points, to go along with four assists and three rebounds, and Lister pumped in 20 points, including four 3-pointers, and grabbed five boards.